I’m back! Is anyone there? Coo-eeeeeeee (echos reverberating down the corridors of mosaic lovers). Let me just walk in, sit down for a moment and take a deep breath in and another long one out. There, that’s better.

Shall I regale you with tales of the move? Do you really want to hear about boxes piled up to the ceiling and mountains of packaging, the multiple runs to the municipal recycling centre and charity shops, the scraps of love, the hordes of letters, the 1970s diaries, the 80s boob tubes, and the sense of quiet and not so quiet panic at the number of unidentified socks that are still heaped up in a corner? I doubt it. So instead it seems appropriate to talk about mosaic Medusa heads – partly because I have felt not unlike one myself over recent weeks and partly because in all the relocating confusion I have at least been spared the obligation of finding a Gorgon to put on my doormat.

When the Romans were setting up house they didn’t get off so lightly. I have already written about similarities between mosaics across the ancient world, but it was only recently that I have noticed that there are an astonishing number of mosaic Medusa heads. Fiece, scary ones with bulgling eyes, fey ones with vapid stares, ones that are almost line drawings in their simplicity and others rendered in great detail.

The number of ancient mosaic Medusa heads (which must be only a fraction of the ones that were actually made) far exceeds expectation or coincidence. Does this suggest that the belief in the Medusa’s power to ward off evil was deeply embedded in the ancient psyche and that Roman householders had a good deal more to worry about than where to position the day beds? Or that fashion was so rigid that a mosaic Medusa head was de rigueur for all households of a certain social pretension?

The first impression is that these weren’t just idle talismen, the Roman equivalent of a hand of Fatima or Evil Eye displayed near the front door. The obiquitiousness of the mosaic Medusa heads and the fact that they are often the central piece in an elaborate psychedelic design of ellipses or spiralling triangles, indicates that the Medusa motif was believed to exert real power in a world where life was precarious and danger was never far away.

As legend would have it, Medusa was once a beautiful woman who attracted the attention of Poseidon. Athena, furious that Poseidon raped Medusa in her temple, punished Medusa by transforming her into a monster whose locks of hair became writhing snakes. Anyone who looked at her turned into stone. Medusa was later beheaded by Perseus, the son of Zeus, who kept her head to use as a weapon because it still retained its powers.

Mosaic Medusa heads turn up all over the Roman world from Britain’s Northern shores to Spain, Greece, Tunisia and beyond. Many show truncated wings on the monster’s brow referring to the belief that Medusa, along with her two immortal sisters, had the power of flight. Most of the mosaic representations strip away her femininity and turn her into a chubby faced youth, sparing their owners the potential embarrassment of inadvertently turning their guests into lumps of stone by having the monster’s gaze slightly askew.

Interestingly in the mosaic of Alexander the Great from Pompeii (below), a Medusa head is even depicted on the warrior’s breast plate protecting him in battle.

But maybe these sideways-looking glances and even the bold frontal stares indicate that the Romans, far from retaining real faith in Medusa’s powers, felt immune from them. With their vast empire and clever inventions, the Romans might have considered themselves somewhat superior to the ancient Greeks from whom the Medusa myth was derived. By having the monster in your sitting room perhaps you were actually letting everyone know how modern and sophisticated you were like adding a classical portico to your electric-gated executive home.

After all, a terrifying creature that you walk across routinely in your bare feet is not going to be terrifying for long. Moreover, we know from the gladiatorial and hunting scenes that the Romans didn’t shy away from using mosaics to show violent acts in all their gory detail so it seems to me that if they wanted to depict a truly scary monster they would have done so.

In many ways the most striking thing about these mosaic Medusa heads is the pattern that often surrounds them:

I assume the pattern in itself – its mesmerising, dazzling effect – did the job of petrifying (in the literal sense) any unwelcome intruder as much as the ghoulish appearance of the severed head. It is interesting that I have only come across one example of the pattern without a Medusa at its centre. This one from Corinth, Greece, which dates from the 2-3rd century AD, has replaced a Gorgon with a head of Dionysos. But look how similar Dionysos’ features and hair are to the typical Medusas we’ve seen above. Did a young wife, hot-headed and flush with youth and love, stamp her pretty foot and demand something a little more up to date for her hallway than an old fusty Medusa?

It’s tempting to speculate that perhaps the prevalence of mosaic Medusa heads refer to a time, rather like our own, when society was moving between two belief systems – one old, entrenched and familiar but not necessarily any longer revered. And the other new, not yet established and still slightly unsettling. Christianity was taking hold and the Romans were endlessly expanding and innovating – travelling, trading, conquering – and it must have been comforting to have something of the old world in times of rapid change.

Just as today’s couples who don’t believe in God still choose to marry in churches so perhaps the Roman house builders commissioning mosaics for their reception rooms wanted something that had the gravitas of age and carried a little of the magic and mystique of earlier times when life was simpler and they didn’t have to worry about what the future held. 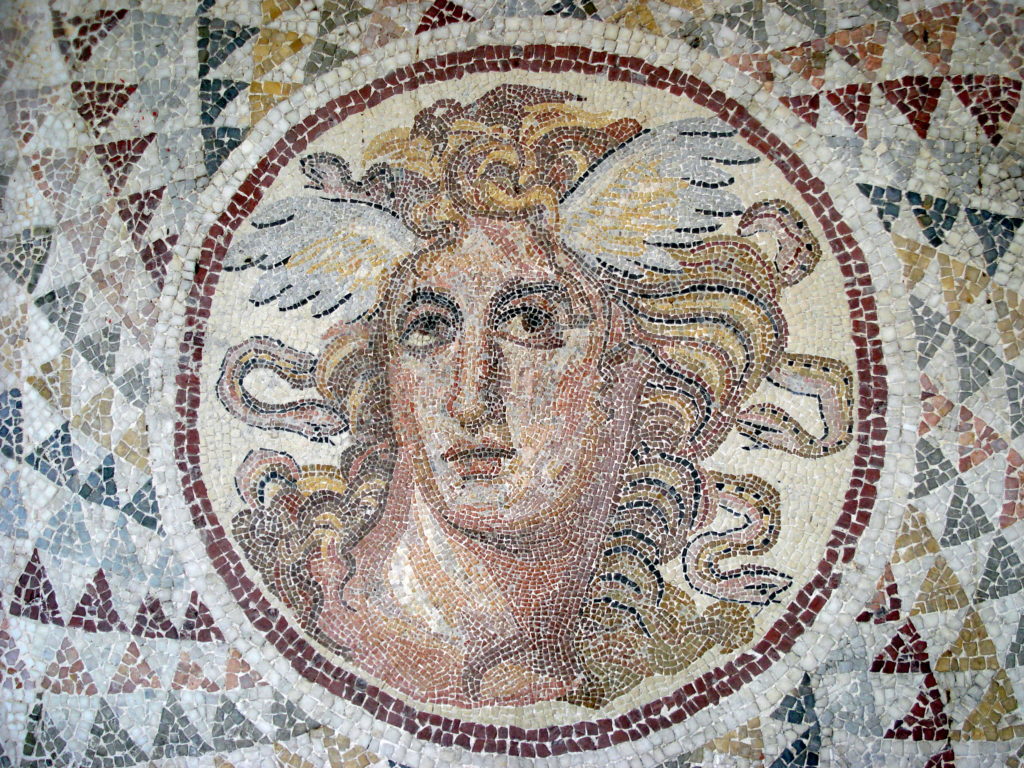