2. Big bushy beard, droopy eyebrows and a resigned expression after wearing a synthetic fibre costume for too long in the toy department; looks like Father Christmas, but is really which ancient god?

The god with the bushy beard is Oceanus, the River God.

The answer is: four. They can be found at a) The Vatican Museum, Rome b) Aquileia, Italy c) Chateau de Boudry, Switzerland d) The Bardo Museum, Tunisia.

The depiction of a giraffe can be seen in the Lod Mosaic, Israel.

The Zeugma Mosaics were threatened by a dam across the Euphrates and are now housed in Gazientep, Turkey.

One of the seven wonders of the ancient world shown in the Qasr Libya series is the lighthouse of Alexandria.

The ‘Mona Lisa’ of Galilee (below) is part of a 4th century Roman mosaic floor is found in Sepphoris in the central Galilee region of modern day Israel.

The real zebra being led by a black man is from Shanliurfa (ancient Edessa) in Eastern Turkey.

Mosaics of all these things including a man pointing into his open mouth can be found at the ancient port of Ostia Antica.

The sauce is garum, a fermented fish sauce.

The Great Palace of Constantinople built in the time of the Emperor Justinian I in what is now Istanbul’s Great Palace Mosaic Museum.

This refers to the mosaic of Aeneas and Dido at the Low Ham Roman Villa, Somerset, UK.

Alexander the Great is riding a cheetah.

15. There are lots of ancient mosaics of hunting dogs but where would you see one incorporated in an agricultural scene?

The dog in an agricultural scene is this one in the Bardo Museum, Tunisia, looking on as it’s master works in the fields.

The mosaic of ostriches in the arena can be seen in the Bardo Museum, Tunisia.

Alexander the Great meets the Jewish High Priest of Jerusalem in the 5th century synagogue mosaic in Huqoq, Israel.

18. It’s well known that one wouldn’t want to cross the Gods, but which mosaic diety is already cross eyed?

The cross eyed diety is the 2nd century Genius of the Year, National Archeological Museum, Madrid.

The ancient city depicted in the map of Madaba is Jerusalem.

The close ups are of: a) Frog on a lily pad, Nilotic mosaic, Naples Archeological Museum, italy.

b) The large fish in the Lod mosaic, Israel.

And the bonus question…

FIND and identify an ancient mosaic which features a bird (perhaps even a partridge) next to (but not in) a pear tree.

Did you find it? This is the mosaic but however hard I hunt I cant seem to find where it’s from. Please help! 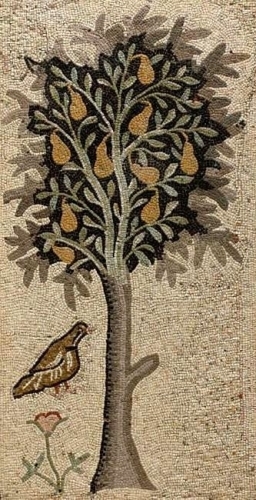 Coming soon: The Use of Glass in Ancient Mosaics