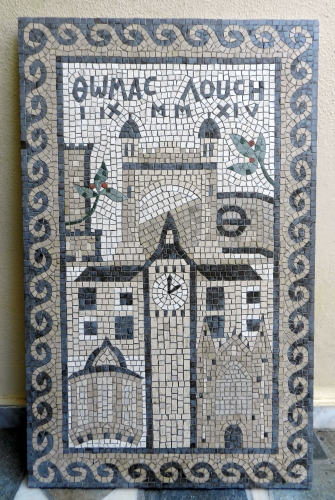 The thing about mosaics – maybe the thing about life – is that the way things start out is not often the way they finish. Great seeming ideas morph into other entirely different ideas. Plans alter. Decisions get shelved and new ways forward reveal themselves. So it was with this mosaic which I made for my nephew, Thomas, on the occasion of his marriage to his girlfriend, Lucy. [An aside: that beautiful shawl was made by my mother.]

I wanted to make something which was entirely personal, a bespoke mosaic, which would fit them and only them. To set their lives together in stone, to seal their happiness and their future with glue and grout and wax. The original thought was to make a personal version of the Madaba map in Jordan, which is on my list of top ten favourite mosaics. I would put in streets and houses which had relevance to the couple but knowing that this was an ambitious plan and had the potential to be a disaster, I sat down to make a scaled down version based on a village in Scotland.

It’s the first time I have made a miniature of something I intend to do on a larger scale and I’m mighty glad I did. As the mosaic progressed, I found myself disliking it more and more and half way through I abandoned the project and had a major re-think. I would still love to do a modern day Madaba map but it would have to be big, really big, so as to avoid looking twee and cutesy.

So idea Number Two was to make a bespoke mosaic loosely inspired by this ancient depiction of the city of Jerusalem:

A bespoke mosaic: the design process

I have been meaning to make an architectural mosaic for some time but I didn’t  entirely trust myself. A building, even a mosaic building, has to have straight lines. It cant be a little bit off or the eye just settles on the wobbly part and refuses to budge. I was also very aware that I had to get the balance right, of light and dark, of size and proportion, and make sure that the lines of the buildings were clear and distinct so it didn’t come across as a visual mess. So, after deciding on the basics (the size and shape of the mosaic and the buildings I wanted to incorporate) I made cardboard cut outs of the main features and juggled them around a bit. Then a bit more. And again, and again and again. Boy, did I juggle. But eventually, I think – at least I hope – I got it as right as I could.

A bespoke mosaic: the story

So this is how the story goes:

Thirty years ago, Thomas Edward Drummond was born in London and spent his early years living near the Balham tube station:

Meanwhile, Lucy Clare was born in Lancashire and spent her early years going on walks and climbing up the Peel Tower near her hometown of Ramsbottom:

So time went by and when they grew up a little more, Thomas went to Cambridge to study history:

And Lucy went to Oxford to study English:

Somewhere along the way they both decided to be barristers and met at Lincoln’s Inn:

And by the time they got together it was pretty clear that their home was going to be in London:

And then they decided to get married and the time was set for 2pm on November 1, 2014:

And afterwards there was a magnificent reception at a big ol’ country house:

And we ate and laughed and danced and raised our glasses to Thomas and Lucy:

And wished them well for their journey through life: