Greece, Mosaics and Me, Part II: A guide to the mosaics of Greece.

To mark the fact that my days of being permanently based in Athens have come to an end, my previous post was a personal story about my mosaic journey in Greece. As well as learning how to make mosaics there and practicing the art for over a decade, I also visited and explored as many mosaic sites as possible across the length of the country: ancient and modern, famous and obscure, well preserved and neglected.

I know that there are many more sites left to see, particularly on the islands, and I hope that I will have the opportunity to visit them in the years to come, but meanwhile in Part II of this two-part series about Greece, Mosaics and Me, I have compiled a comprehensive guide to the mosaics of Greece for visitors and mosaic enthusiasts.

I have written about most of these sites in separate blog posts but I thought it would be useful to have a one-stop-shop post about the mosaics of Greece rather than needing to flit from page to page. In this way, if you are interested in a holiday in Greece and want to visit a few mosaic sites along the way, then you can find all you need to know here. I have also listed the three main sites which I haven’t had the opportunity to visit yet: 1) the 2nd century mosaics of the House of the Dophins and the House of Dionysos on the island of Delos 2) the Byzantine monastery of Nea Moni on the island of Chios and 3) the various Roman mosaics of Crete. Please let me know if I have left any out. I have an insatiable appetite for mosaics and I would be loathe to miss any.

The wonderful thing about visiting the mosaics of Greece is that they are everywhere. On modern church facades, in almost every museum and in many of the ancient sites. I just have to wander out of my front door and down the road to the metro station (passing scattered ancient ruins in someone’s front garden) to see these at the Church of Panagia, Kifissia, Greece:

Or stroll up to the shopping area to check out the sales and linger over these at the Church of Panagitsa, Kifissia.

Going to central Athens on the metro, there are these to enjoy at the Agio Eleftheriious station:

And of course the centre of the city has endless fragments and one-off mosaics in different locations.

Alphabetical guide to the mosaics of Greece:

ATALANTI, fragments of late Roman mosaics on the sea shore. Difficult to find and not interesting examples of the art, but very atmospheric.

ATHENS ARCHEOLOGICAL MUSEUM. Mostly statutes but if you are in the museum anyway and need a break, go downstairs to the cafe and enjoy the wall mounted mosaic of Medusa in the courtyard garden.

ATHENS, BYZANTINE AND CHRISTIAN MUSEUM. Predominately Byzantine icons but there is a good full-sized copy of the Emperor Justinian and his wife Theodora by the ticket office and some nice mosaic fragments in the final room. Until recently you also had the pleasure of walking over a Roman mosaic pavement at the entrance to the museum but I think it might have been removed for restoration.

ATHENS MOSAIC SCHOOL. Run by Nikos Tolis. The place to go if you want to attend a mosaic course in Athens or see the methods favoured by Greek mosaic artists. There is some fine work hanging in the rooms and Artemis Klitsi, who is on the board of the Greek Mosaic Assocation, would be happy to show you around.

BENAKI MUSEUM, ATHENS. Well worth going to for all sorts of unmosaic related reasons but if it’s mosaics you are after then stop by for the wonderful life size copy of the Virgin and child from Agia Sophia in Istanbul, a 10th century fragment from the Studios Monastery in Instanbul and my favourite Medusa head of all time from the Eastern Meditteranean.

CORINTH. The museum attached to the ancient site of Corinth has four wall mounted mosaics which are well worth seeing, particularly the dining room floor with delicate glass embeded mosaics of fruit, animals and plant tendrils.

CRETE.  Crete has a lot to offer in the Roman mosaic line and there’s even a book dedicated to the Mosaics of Roman Crete so it’s clearly worth a visit on those grounds alone. I haven’t been mosaic hunting there myself so I can’t give you personal recommendations but some basic research suggests that Kissamos is the place to head for.

DAPHNI MONASTERY, ATHENS. This is an UNESCO World Heritage site covered in glittering gold Byzantine mosaics of the highest quality. The monastery is open two days a week. Checking the opening hours before you visit. 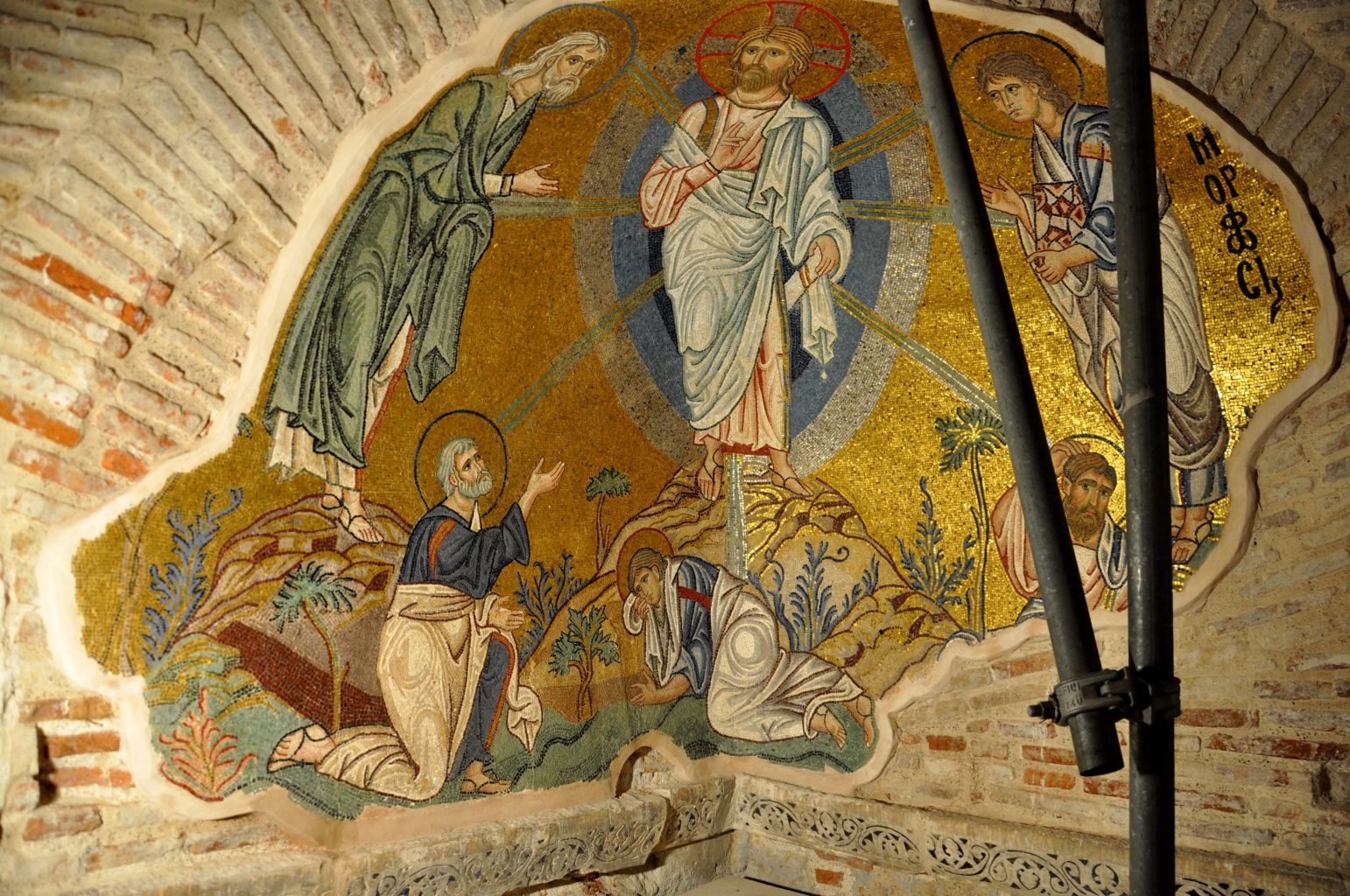 DELOS ARCHEOLOGICAL MUSEUM. The island of Delos is only accessible by shuttle boat from nearby Mykonos but is well worth the effort to get there for the exquisitely detailed mosaics from the Hellenistic and later periods including the famous one of Dionysos riding a leopard. This is probably top of my list of places to visit to see this little chap:

DELPHI. Has one large 5-6th century church floor mosaic outside the archeological museum with splendid details of domestic and extoic animals and fish but it’s hard to appreciate from behind the barrier. Worth asking to see if you can get up closer and Atalanti isn’t too far away if you are up for an adventure.

DION. Do-able in a day trip from Thessaloniki, see below. A spread-out archeological site which always seems to be virtually empty with an excellent museum attached. The museum has a floor mosaic of Medusa from the House of Dionysos which is well worth seeing and there are other interesting mosaics still in situ at the Roman bathhouse. The famous Epiphany of Dionysos mosaic is being restored and cannot be viewed at present.

DISTOMO. A little village enroute to the Monastery of Osios Loukas (see below) which is famous for being the site of a massacre of civilians during Nazi occupation. It has a small museum with a few unlabelled but amusingly odd mosaics randomly stacked against the walls.

HYPATI, BYZANTINE MUSEUM OF PHTHIOTIS. It’s curiously difficult to find out anything about this nine-year-old museum which is located in central Greece not far from Lamia (see below) but if you click on the brochure attached to the link above you will see that the museum purports to contain ‘an exhibition devoted to the art and technique of Early Christian mosaics’. Hmmmm, yes, sort of. If you’re going out of your way to see the museum please be warned that a large section of the exhibition is devoted to mosaics which can’t be seen because they are in storage, are still covered up in situ or are out on loan, but there are plenty of photos to remind you of what you’re missing.

ISTHMIA. Not far from Corinth (see above) so it’s easy to combine the two. It has some highly unusual glass opus sectile mosaics from Kechries in the little museum and some black and white sea-themed mosaics in situ at the far side of the archeloogical site of Isthmia that are not cordoned off if you like the thrill of walking on ancient mosaics.

LAMIA ARCHEOLOGICAL MUSEUM. Not really handy for anywhere and only has one mosaic in the town’s museum but if you are indefatigable and really want to make a detour then go for it and you will be rewarded with this.

NEA MONI MONASTERY, CHIOS. This 11th century monastery on the island of Chios has been designated a UNESCO World Heritage Site and is prized for its mosaics. I haven’t been there, but would love to.

NIKOPOLIS. Founded by Octavian in 31BC. One of my favourite mosaic sites because the boys ‘discovered’ it. We were on a long car journey and I was determined not to stop but my site-seeing son insisted and the site was closed (as they often are) but, undeterred, the boys clambered over the walls and I heard shouts of glee: ‘Mosaics! Come! Mosaics!’

OSIOS LOUKAS. This secluded 10th century Byzantine monastery covered in mosaics gets five stars. It’s a two-hour trek from Athens but well worth it and if you are feeling super energetic and want to make a long day of it, you could combine it with Delphi (above).

PELLA. The birthplace of Alexander the Great and the birthplace of mosaics as we know them dating from the 4th century BC. Pella has some stunning pebble floors including beautiful swirling floral patterns and is well worth visiting. It would be criminal to miss if you are in Thessaloniki anyway.

RHODES. There is lots to see and do on the mosaic front in the medieval town of Rhodes from the pebble mosaics which decorate the streets to the very fine mosaics at the Archaeological Museum and those at the Palace of the Grand Masters.

SPARTA ARCHAEOLOGICAL MUSEUM. Sometimes small museums are the best. I loved this one. It has quite a few wall-mounted third century mosaics in a quiet little museum which you are likely to have all to yourself.

THESSALONIKI, ARCHEOLOGICAL MUSEUM. A great little museum full of all sorts of mosaic wonders. Start outside where a number of floors dating from the 2nd to the 4th centuries are laid out in an imagined floor plan of a Roman house. Inside, the mosaics include a large scene of Dionysos discovering Ariadne snoozing on a leopard skin, a threshold mosaic with three fish, personifications of winter and spring and an exquisite little fragment of a four-horse chariot race.

THESSALONIKI, MUSEUM OF BYZANTINE ART. This is where my passion for mosaics began so naturally I’m rather fond of it. It includes 4th century patterned stone mosaics from private houses, a 5th century work incorporating the months of the year, and exquisite fragments of dedicatory church churches from the 7th – 9th centuries with all the glass and gold confidence of the best Byzantine murals. A must if you are in Thessaloniki. Also bear in mind that Macedonia isn’t far away and you might want to scoot up to Stobi and Heraclea Lyncestis.

THESSALONIKI, BYZANTINE CHURCHES. Thessaloniki is a UNESCO site for a reason – there are an awful lot of Byzantine churches tucked away behind tower blocks in the city centre or nestling up within the old city walls many of which have good if not expansive mosaics. If you want to see a good smattering you need to leap out of bed and head out pronto with a cup of coffee in one hand and a good guide book in the other because they tend to close at around 2pm and many of them don’t reopen in the afternoon. There are too many to list here (that’s where the guide book comes in handy) but I would particularly recommend the 4th century Rotunda mosaics and the 14th century Church of the Holy Apostles.