Another example of little known, or at least little written about, mosaics in Greece. These black and white mosaics at Isthmia, near Corinth, can be about an hour’s drive from Athens.

The site isn’t on the main tourist trail and was virtually deserted the day we visited so I had them all to myself. They are unfenced and you can walk on them which seemed disconcertingly decadent as well as marvellously thrilling that more than a millenium after completion they are sturdy enough to do the job they are made for.

Aquatic motifs keep coming up in Roman mosaics – what better symbol of trade, wealth, food, the fickleness of the nature, the unpredictability of the Gods and the extraordinary beauty of the seas?

Countless people must have sat waiting for months and years for their loved ones to return from long sea voyages and when such a wild and monstrous force dominated your life, it was inevitable that it would turn up in other forms suitably contained, controlled and domesticated.

I am struck by how extraordinarily similar in execution these mosaics are from others on the same theme – of course one would expect creatures from common myths to crop up all over the Roman empire, but why, in some cases, are the same themes actually made in almost the same way? Pattern books? A few specialist mosaic designers who travelled though out the region?

Take this mosaic at the Palazzo Massimo Museum in Rome: 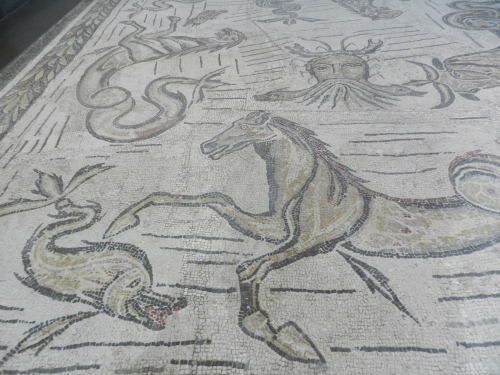 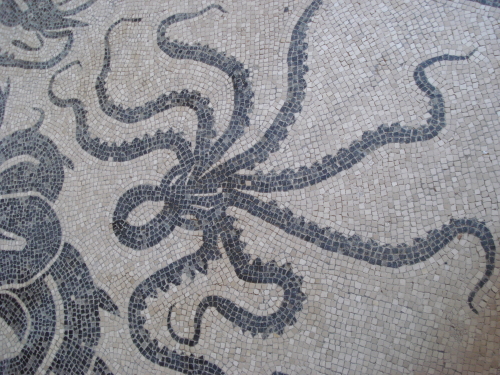 Or this floor mosaic at the House of Italica, Western Andalusia, near Seville: 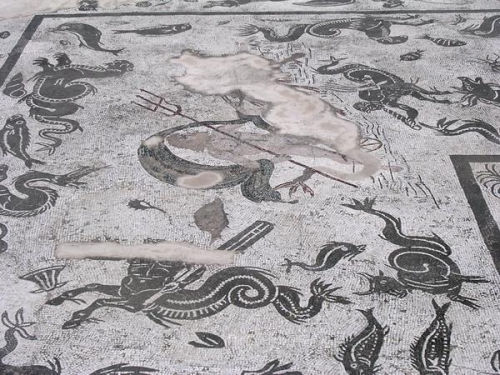 Terrifying and mysterious as it was, the sea, pristine, crystal clear and teaming with fish must have been more lovely by far than even the loveliest of Mediterranean seas of today. Here’s an example of one in Pelion, Greece, not far from where Jason set off on the Argo: 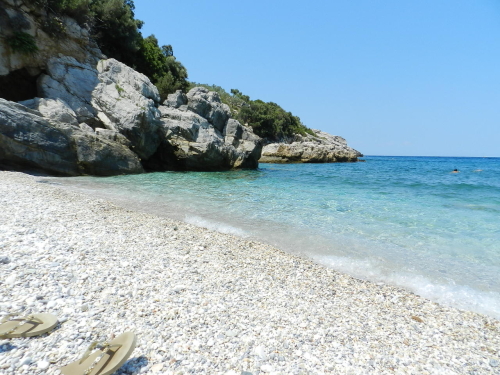