It’s been a long time since I first saw images of the mosaics of Osios Loukas in Greece. Of saints in softly gathered robes with their solemnly composed faces, heavy lidded eyes, downturned mouths and combed beards. Of domes covered in fractured gold and the usual assembly of Biblical figures and familiar scenes. I have always had a particular fondness for photographs of the mosaicked monks, ascetics looking grim and emaciated, but somehow I never quite got around to visiting the Byzantine monastery which is tucked discreetly into the slopes of Mount Helicon, two hours north of Athens.

But one clear day in October I finally got my act together and pulled up at the car park above the monastery dedicated to St Luke, a 10th century hermit with an eye for a beautiful spot. The saint, who was reputed to have miraculous and prophetic powers, chose this place with its magnificent views over Mount Parnassos to spend the last few years of his life and as soon as you get out of the car, you are struck by the perfection of his choice – the total silence (the road ends here), the absence of the usual garlands of electrical wiring, the sense of self contained order and delicious calm. If only normal life were ever thus.

History of the mosaics of Osios Loukas

The thing about visiting mosaics, even ones you know well from books,  is that you almost invariably get an extra pleasant surprise thrown in. The surprise here was a little museum which showed how the mosaics of Osios Loukas were originally made and subsequently restored. It seems that they took quite beating over the centuries, being subjected amongst other things to earthquakes and Turkish bullets. During the 20th century a series of restoration projects were undertaken which lasted several decades and involved removing every inch of mosaic and putting in a new substrate of lime mortar so that the mosaics we see today, although damaged in parts, look disarmingly fresh given their 1,000-year-old history. 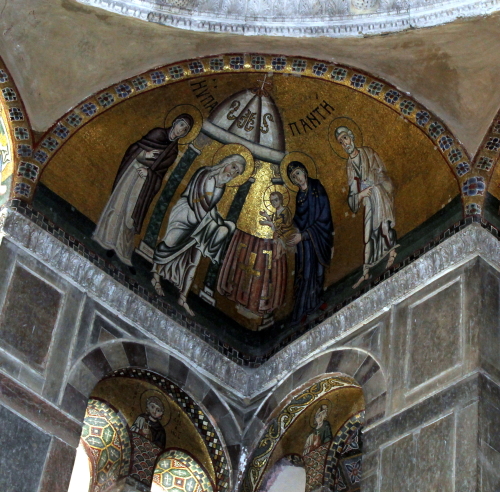 The museum also includes an interesting exhibit of the different layers of substrate used to fix the original mosaics as well as plaster fragments which show how the placing of each individual piece was marked and coloured onto the wall before the tesserae were applied:

Continue on and the next building you encounter is the main church, the katholikon, where the mosaics greet you as soon as you set foot in the door. This is a larger, grander version of Istanbul’s Church of St. Saviour in Chora. Where the St. Saviour church is intimate, the katholikon of Osios Loukas is imposing, with soaring domes and shafts of filtered light coming though panes of rounded glass.

The mosaics of Osios Loukas, while naturally similar in theme to many ecclesiastical mosaics of the Byzantine period, have a pared down simplicity with careful groupings and largely empty backdrops and a predominance of mosaic portraits of saints. Here is Christ looking down on you from the narthex as you enter:

And here are two other Christs from Istanbul, one (top) in the Church of St Saviour and the other in Agia Sophia:

There is a resurrection scene with Christ seizing the newly-risen dead by the wrists and wrenching them from their graves in a mosaic composition which matches its frescoed equivalent in St. Saviour.

The Nativity, the Baptism in the River Jordan, the Washing of the Feet, the Crucifixion, Doubting Thomas and Daniel in the Lion’s Den are among the Bible stories represented in mosaic along side all the gathered saints including church fathers and founders of the early Christian communities: 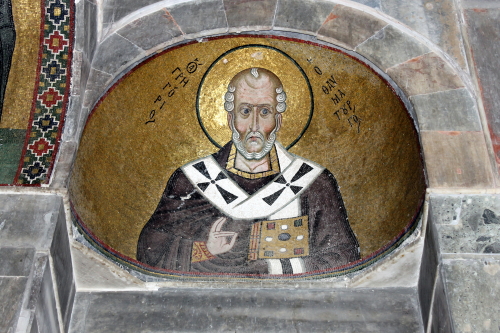 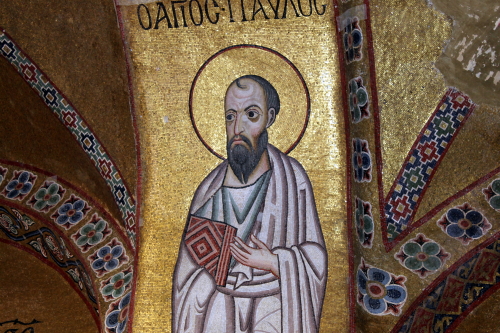 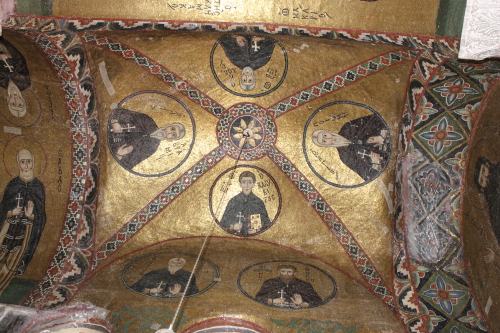 Looking at the wall paintings

My photography skills, if I can be said to have any, don’t extend to photographing interior mosaics high up on church walls so you’ll just have to go to Osios Loukas and see the mosaics for yourself. However, the monastery’s floors are closer to hand and beautifully inlaid with opus sectile:

And when you’re tired of mosaics (if such a thing is possible) there are plenty of wall paintings to keep your attention. I studied icon painting for a while and there isn’t really much difference in terms of style and composition between painting an icon and mosaicking one as you can see in these frescoes from the church and side chapel:

And there isn’t really much difference either between a 1,000 year old monk and a modern one: