When my aunt knew she was dying, she asked me to make a mosaic for her grave. It was four years ago, but even now I find myself enormously touched by her request. She wanted to be buried with her father, my grandfather, who died of a brain tumour in 1937 and was interred in a large, urban graveyard on the outskirts of Edinburgh. Their names and dates are written in black lettering on a simple granite tombstone which consists of three low steps at the base of a plain cross.

My aunt wanted the words ‘Lacrimae Rerum’ to be made in mosaic letters and placed on the back of the second step. The words come from Virgil’s Aeneid and mean ‘the tears of things,’ referring to the inherent saddness of existence. I don’t know why she chose those words. I never asked and now I am sorry that I didn’t but it’s an epigram that one can’t argue with. The size of the mosaic, a mere 18cm by 45cm, left little room for manoeuvre especially because I wanted to include a border and some simple decoration. I chose an unusual font partly because I liked it and partly because I wanted the lettering to be decoration in itself, to draw the eye and make the non Latin reading casual cemetry wanderer stop for a moment or two and ponder.

Now that I have acquired and attempted to absorb the Tom Perkins’ wondrous book, The Art of Letter Carving on Stone, I can see where I went wrong. The book is the only one I have come across which deals with the complicated business of letter spacing and ‘weight’ (determined by the number of times the letter stem width fits into the letter height, since you ask) but at the time of making my aunt’s mosaic I only had my eye and sense of proportion and balance to work with. I made the mosaic on mesh and once it was completed, I handed it over to the cemetry caretaker to install because (as I have confessed before) mosaic installation is not my forte.

Now that I have made a mosaic headstone, albeit a modest one, I can’t see why mosaic memorials aren’t all over the place. Mosaics are endlessly versatile and have that very durability that is sought after when it comes to memorials. There is, of course, the unsurpassable mosaic carpet draped over the ballet dancer Rudolf Nureyev’s tomb in the Montparnasse cemetry of Paris. The sumptiousness of the soft folds in gold and smalti achieve with mosaic something almost akin to that final moment of utter desdainful grace achieved by the dancer taking his final bow.

And once I got going on the hunt for mosaic headstones, they started to pop up here and there. Due to to Jenine Gerlofsma’s Mosaic Gravestones board on Pinterest I came across this memorial to Ricardo Menon (1952-1989) created by Niki de Saint Phalle also in Montparnasse:

There is also  this portrait of a young man on a headstone in Montreal, Canada:

And I also found these two from Venice, Italy which were posted on the Mosaic Art Source blog and attributed to simonk on Flickr must be surely be made by the same artist although the first is not ‘signed’ and the second is:

My efforts to find examples of ancient mosaic headstones yielded slim pickings. Given the Roman’s penchant for mosaics and their use of mosaic decoration to underscore social status and display their wealth, it strikes me as a pity that mosaic memorials didn’t hit it off during the heyday of the Roman empire. Yet how can one begrudge the lack of mosaics on headstones in Roman times when we have funerary stelae in their place, able even now to tear at one’s heart strings?

Nonetheless, I found a few. First, this one (2nd to 3rd century AD) from the ancient pagan necropolis of Isola Sacra, south of Rome:

This cross-eyed lady also comes from Isola Sacra so it doesnt seem far fetched to assume it was once a tomb marker too, but try as I may, I cant seem to pin it down more precisely and the headdress suggests it might just be a depiction of one of the seasons. Does anyone know?

The inimitable Carole Raddato of Following Hadrian posted this wonderful photograph on Flickr of a deceased person standing next to a bust of Sappho from the tombstone of a nine-year-old boy now in the Split Archeological Museum, Croatia: 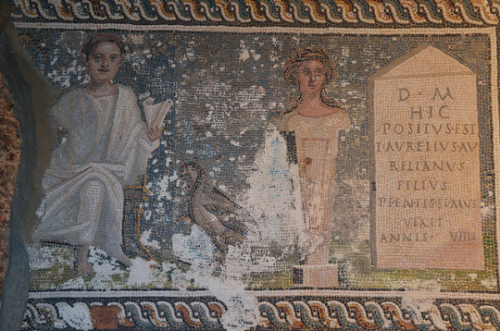 And the Bardo Museum in Tunis has plenty of examples of Christian mosaic tombstones dating from the 4th to 5th century AD:

These photos are on www.romanartlover.tripod.com where a wonderful blog post about the Bardo Museum mosaics tells us more about the Christian tombstones in particular:

In general the inscriptions on Christian gravestones were limited to the name of the dead, the age and the formula vixit in pace (he/she spent a peaceful life). The grieved parents of Natalica [third mosaic from left, above] made an exception for their daughter who lived ten years, eight months and twenty-one days and called her dulcissima (sweetest). The inscription has another interesting aspect: the use of b instead of v in bixit in pace, an effect of Byzantine influence because in Greek b sounds as v.

The Bardo collection also includes these (the top one is one of my personal favourites. Who can resist those goggly eyes and sticky outy arms?):

Lawrence Payne of Roman Mosaic Workshops reminded me that meanwhile in Spain, around about the same period (4th century AD) we have Bishop Optimus’ tomb stone mosaic which was found in the necropolis of Taragona and which he made a copy of for the nearby Biblical Museum.

By and large mosaic headstones kept to the old formula of inscriptions, simple patterns and crude likenesses, but then some time in the middle of the 5th century something changed. Think of the Galla Placidia Mausoleum  in Ravenna, Italy, reputedly (noone’s really sure) made by the Roman Emperor Theodosius I’s daughter as a tomb for her and her family. It’s as if the concept of mosaic headstones has resurfaced like the shark in Jaws with a sudden jolt,  bursting onto the scene with a whole building encased in glittering glass mosaics to commemorate the dead. Galla Placidia’s Mausoleum:

Come to think of it, the idea of a planning one’s own tomb has a certain appeal. I have the plot. Now all I have to do is think of the design….