Mosaic patterns: how it all began

My aged mother is a prolific and brilliant knitter who writes an almost daily knitting blog with a devoted following.  At some point she must have been thinning out her knitting books because I ended up with several by the renowned knitting designer (and sometime mosaicist) Kaffe Fassett which I keep in my studio. One of the books, full of glorious colour plates, is propped up on a shelf. The pages are held open with a bull clip and every time I see it I am reminded of Fassett’s perfect control of colour and extraordinary mastery of pattern.

Mosaic and knitting are not such distant disciplines. They both share the slow and careful adding on of parts to create a whole, the fundamental reliance on the build up of lines and both have a deep connection with pattern, leading to mutual borrowings and cross overs. Just think of Fassett’s famous ‘tumbling bricks’ pattern above and you will know what I mean.

However, despite often thinking about the connection between mosaics and knitting (I knit in stone), it wasn’t until a recent trip to Tunisia that the central importance of pattern in the history and evolution of mosaics really took hold of me. I’m a details person and expected to spend a happy few days at the Bardo Museum surrendering myself to the minutiae. But from the moment I walked in something different happened. It was as if I had laid out a table for guests – arranged the cultery with extra care,  polished the glasses, put flowers in the centre – only to catch the table cloth as I turned and see the whole thing come crashing down.

Mosaic Patterns at the Bardo and El Jem Museums*

Being brutal, you could almost say that the motifs at the Bardo and El Jem museums are formulaic. There are lots (and lots) of Dionysian scenes, seascapes a plenty, gods galore, hospitality tableaux, depictions of hunts. You know the score.

Formulaic? Are you mad? Of course I am not denying that there are plenty of mosaics capable of wrenching the heart strings and turning the stomach but I expected that. After all, that’s why I went there in the first place. The scale, vitality, and originality of the designs is undeniable.

But the thing that really took my breath away was the unexpected exuberance of the mosaic patterns. They were just so lush.

Lush. Quite literally. It was as if the mosaic patterns were bursting with some sort of organic, seething, sprouting energy. There was no attempt to sanitise or tame nature for these domestic interiors. Quite the opposite, nature was invited in and flaunted in all its vegetal luxuriance.

It makes sense. This part of northern Africa was the bread basket of the Roman world. It was immensely fertile and land owners grew rich on the proceeds of the soil. The bounty of nature was quite understandably  celebrated in the private spaces of the prosperous merchant classes. However, the mosaic patterns aren’t just verdant. There is more to it than that. The geometric mastery of composition and space is breathtaking.

And the fascination with pattern is irrepressible. Everywhere you look there are softly shaded curls and whorls, repeats, optical illusions and details crammed into unobtrusive borders.

What is remarkable about the mosaic patterns in the North African mosaics is the sheer amount of experimentation. It could be that the museums choose to display only those mosaics which have something unique about them but the variety in the patterns and designs suggests that whoever commissioned them wanted their particular mosaic floor to be different from all the others. They weren’t afraid to stand out.

Even a quite ordinary sea scene like this one made for bottom of a basin in the 3rd century has the loveliest of borders, a variation on the ubiquitous wave pattern. 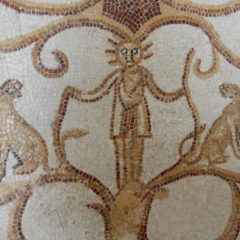 According to Mohamed Yaccoub, author of The Splendors of Tunisian Mosaics, one of the earliest mosaics in Africa is a vast 2nd century pavement made for the Trajan Baths of Acholla now at the Bardo Museum. This mosaic, writes Yaccoub, is the ‘work of a team of artists…no doubt from Italy, who….sought to innovate by adapting to pavements the tendencies normally associated with paintings.’  Certainly, an attempt to replicate the delicate tracery of Pompeiian painting explains the unusual attention to detail in the borders of this mosaic which is surrounded by a freize of little creatures and animals nestled admidst curling foliage and stylised flowers.

Look at this image below of the frescoed ceiling of Nero’s pleasure palace, the Domus Aurea, in Rome and you can immediately understand Yaccoub’s point. What could be more mosaic like?

Perhaps a trend for floors reflecting ceilings was thus set by the early mosaic masters arriving in north Africa which then spread out to other settlements in the region. This would explain why so much attention was given to mosaic patterns and borders. Having made a mosaic of a sheaved carafe and a wine glass, as close to life as tesserae allow, the first impulse would be to frame it simply. But not if you wanted to mimic and reflect the paintings in the room.

Interestingly there are a number of mosaics in the Bardo Museum which explicitly imitate architectural materials. Here,  now embedded in the floors for us all to walk over, is one of a brick wall next to a what one assumes must be a pool: 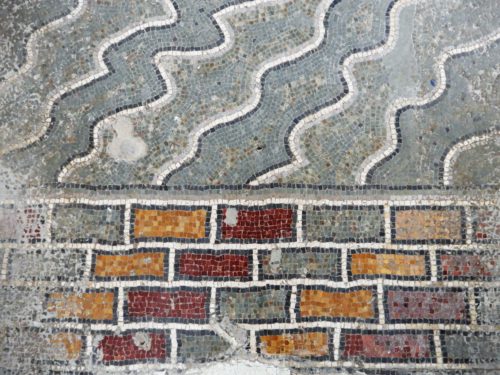 Another, which I find fiendishly clever in the mosaic pattern scheme of things is a cross sectional view of polished alabaster:

These relatively humble mosaics reinforce the point that  mosaics were designed as part of an architectural scheme and were not just pretty things added on to embellish a room.

In conclusion, it seems that the profusion of  extraordinary mosaic patterns in Tunisia’s museums with fresco-like detailing and three-dimensional illusions woven into borders is a consequence of the Romans in north Africa being geographically removed from the centre of power. Trends which were inherited from Rome, such as the love of optical illusions and painterly effects, developed differently in a different context.

Without the stultifying influence of imperial taste, the mosaics beloved by the newly enriched aristocracy in Africa, grew ever more sophisticated and complicated, vying to exceed each other in intricacy and cleverness.

I could go on for ever. There is so much to show you, but I will have to rein myself in and leave you with a few more to savour.

*Some of these photographs of mosaic patterns don’t have captions. That is because I took almost 1,000 photos while I was there and the captions weren’t always easy to keep track of….