The Garden Mosaic – from start to finish.

This mosaic was made using the reverse method on paper and installed over an arch in a walled garden in Dumfries and Galloway, Scotland. The arch leads into an orchard where free-range chickens roam. Jenny Chapman, who jointly owns and runs Kirkennan Estate, commissioned the mosaic and wrote a post about its inception, making and installation. 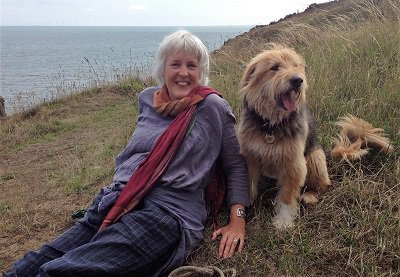 The idea of commissioning a garden mosaic emerged when an old school friend of mine visited Kirkennan for the first time last August. We had been put back in touch by mutual friends after having not communicated since leaving school many moons ago. In the interim Helen Miles had spent a number of years living in Greece where she developed a passion for, and artistic practice in, mosaics. Michael and I loved the work we could see on Helen’s website and the idea of a garden mosaic for Kirkennan was born.

Helen advised that it was better to put it on a wall rather than the ground to ensure visibility and protect it from tread. After some discussion we decided to locate it over the gate between the vegetable and orchard sections of the walled garden. We were keen that the design should be site specific and spent some time tossing ideas about, but kept coming back to the idea of the main motif being our rather characterful cockerel Scruffy. This seemed particularly appropriate given the arch marks the entrance into Scruffy’s domain. Around Scruffy various produce grown at Kirkennan were to be illustrated. 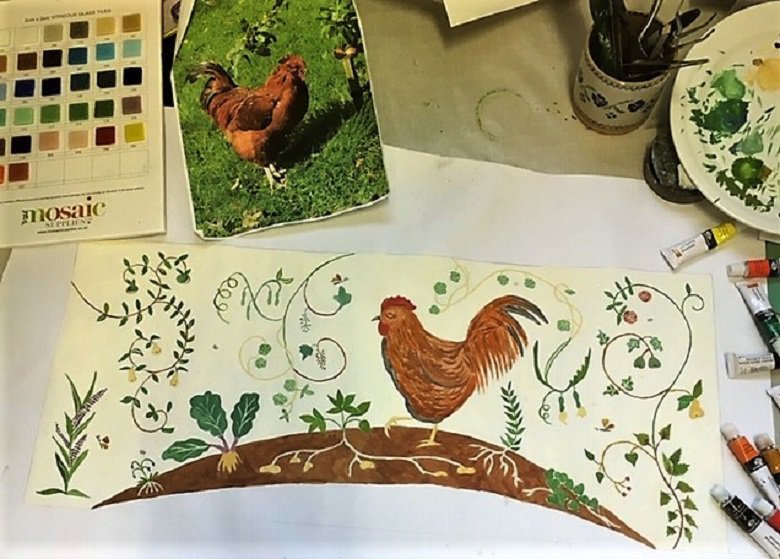 After meeting Scruffy and quizzing me about what was grown at Kirkennan Helen went away and did some rough sketches. Once we were all happy with these initial ideas she developed a coloured drawing showing us the colour palette she intended to use.

Helen decided to use unglazed ceramic with a small amount of vitreous glass to make the mosaic. The mosaic was made using the indirect method whereby the pattern is drawn onto strong paper and then the tiles stuck onto it using wallpaper paste. This means that what we see up to the point of peeling the paper off the finished mosaic is the reverse of the design. 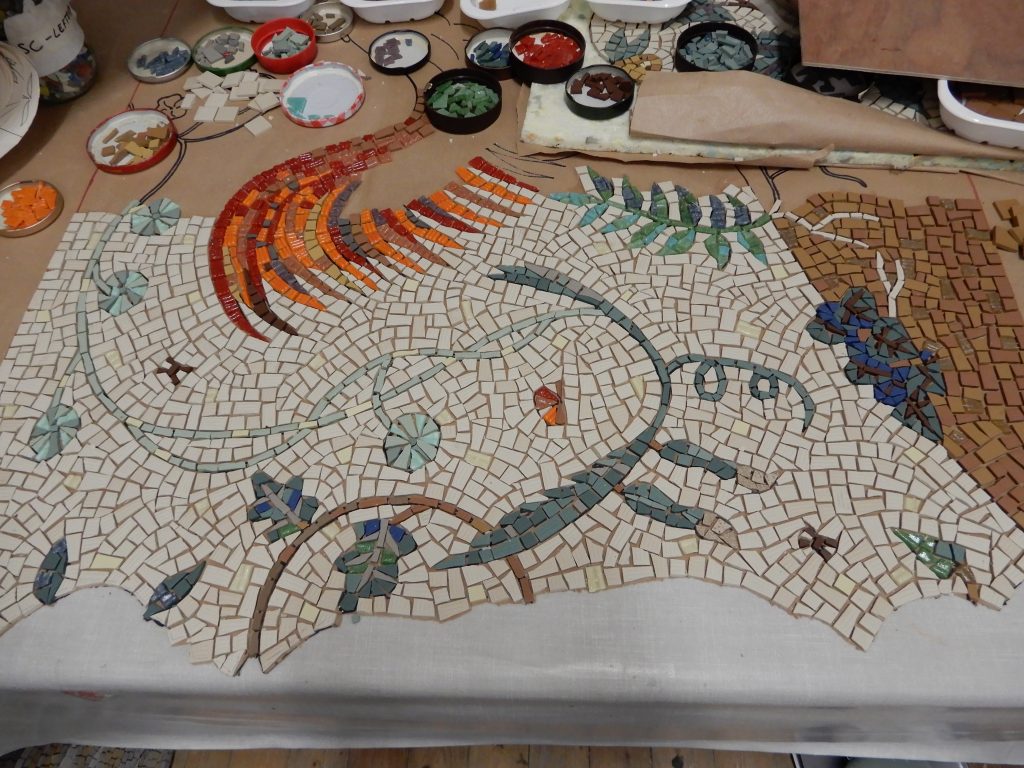 As her studio in Edinburgh is not large enough to make the mosaic in one piece Helen cut it into sections and stacked them on boards as she made them. This made transporting the mosaic easier, but did mean she wasn’t able to see the full design until we laid it out at Kirkennan and even then we could only see the back. 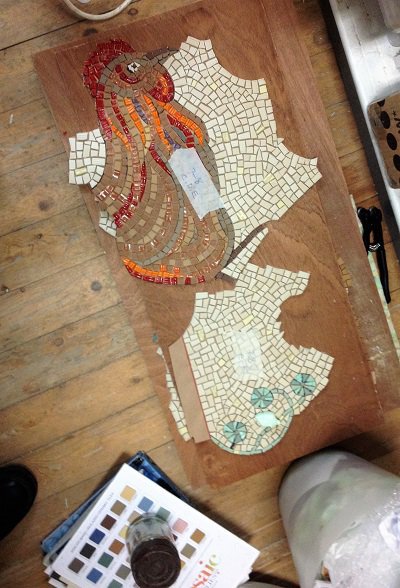 The photo (right) was taken when I visited Helen’s studio in January to see how she was getting on. I just love the detail on Scruffy’s head and neck! The mosaic arrived at Kirkennan as a set of giant jigsaw pieces and lay on our sitting room floor for a few weeks till the risk of serious frost was past. In early April local artisan Chris Lettington prepared the wall for installation. This was a skilled job entailing cleaning the wall, filling in gaps and then rendering the uneven surface with a lime based mortar. The photo shows the wall once it had been prepared for installation. The mortar was left a couple of weeks to cure. 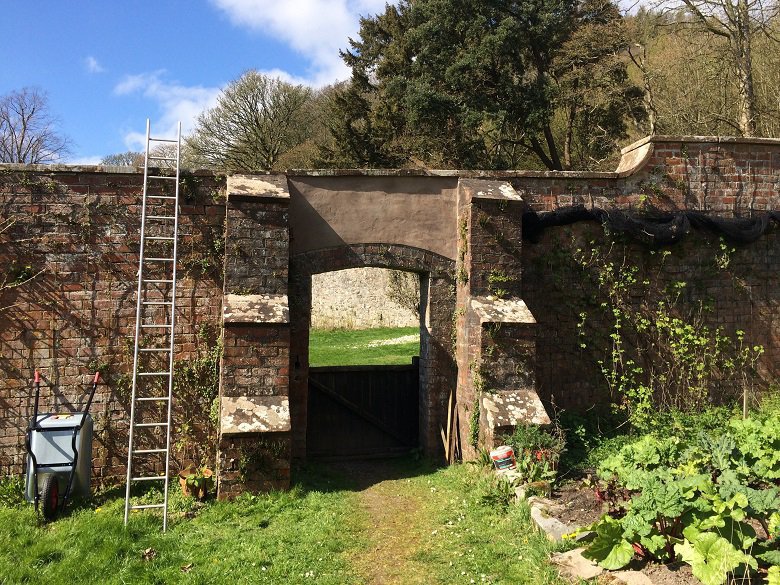 As can be seen from the photo the area chosen for the garden mosaic is not symmetrical. Indeed it is a lot more skewed than is evident in the photo. This caused some challenges. 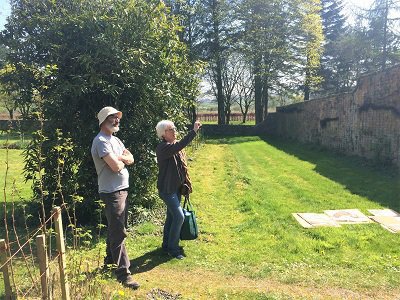 Chris sized the plastered area to ensure that moisture would not immediately be absorbed out of the glue. The next task was to decide exactly how to deal with the odd shape of the area. The original design was made as a large rectangle with an extra part on the side that was deeper. We knew that this was going to have to be adapted on site to allow for the non square corners of the chosen location. However we hadn’t fully taken into account how far the top of the area was from being horizontal; this meant quite a bit of adjustment to the shape of the mosaic leading to some sections being cut off and others added on site.

Installation was done in sections from the top centre with the vertical position being chosen to ensure that a minimum amount of the design detail was lost. 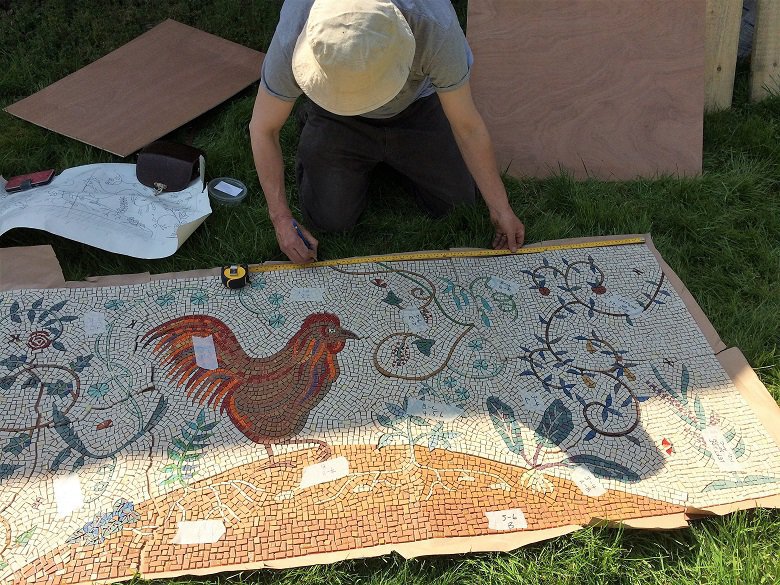 The photo shows Chris marking the central point of the mosaic. Quite a bit of the brown mound that Scruffy is standing on was cut out to allow for the curve of the arch but we chose the vertical placement to avoid losing any pototoes.

The glue was put on in sections to ensure it didn’t dry before being used. Here Chris is putting up the fourth section of the mosaic. Once the sections are in place all that can be seen is the drawing of the design on the paper. 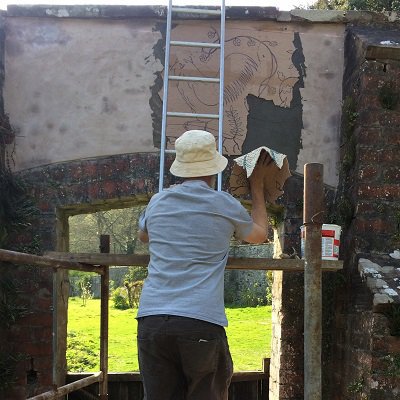 The level line can be seen at the top right of the photo. Some of the original design on the left hand side had to be cut off to ensure it would fit. This was surprisingly easy to do with a stanley knife. Some of these cut off sections were then used to fill in the gap on the top right side with the rest of the gaps being filled with new tiles stuck directly onto the glue.

The photo below shows the full mosaic glued onto the wall with the backing paper still in place.

Once the full mosaic was glued in place it was left for 2 hours for the glue to harden. The paper was then wetted with a sponge and carefully peeled off – revealing the front of the mosaic for the first time. Where the sections of paper had been joined with tape it was more difficult to remove as the water was not penetrating. A few tiles did fall off at this point – mainly glass ones which were slightly thinner than the ceramic ones. These were easily replaced.

Helen repairing Scuffy’s tail where a few tiles fell off: 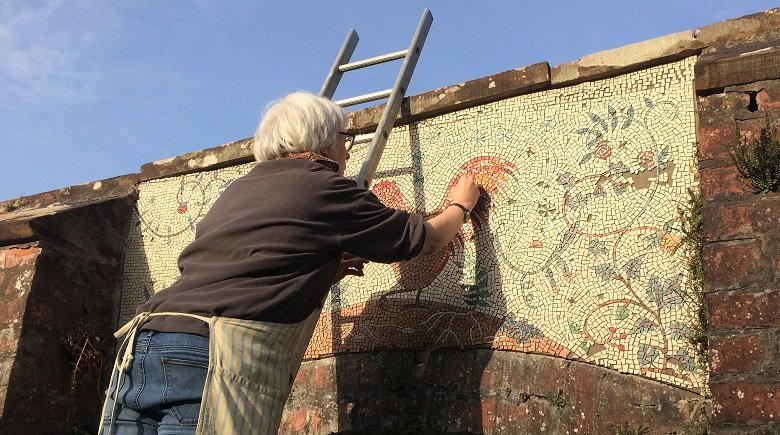 After all was glued in place it was left for at least 24 hours before grouting. The grout sticks to the glue behind and the edges of the tiles and makes the whole mosaic much stronger.

Chris grouting the mosaic (below). 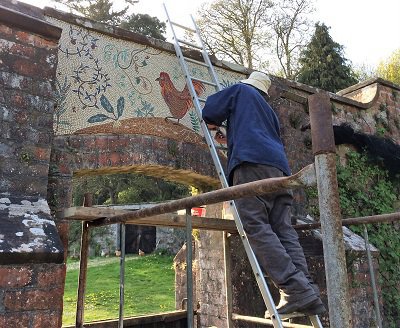 The finished mosaic in situ is both striking and blends into the location and we are incredibly happy with it. If you are staying at one of the Kirkennan Estate Holiday Cottages please do go and take a look.” 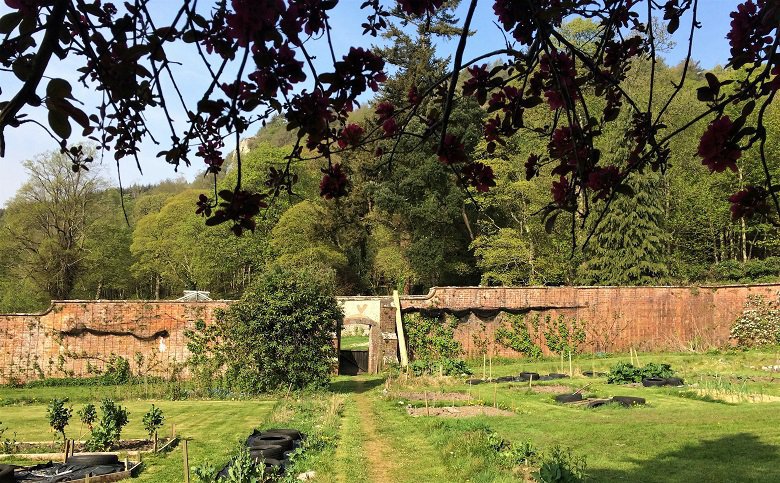 Chris Lettington lives in Auchencairn and besides being a fabulous mosaic installer makes carved wooden marionettes and kinetic art.

Jennifer Chapman is co-owner of Kirkennan Estate Holiday Cottages where the garden mosaic has been installed.