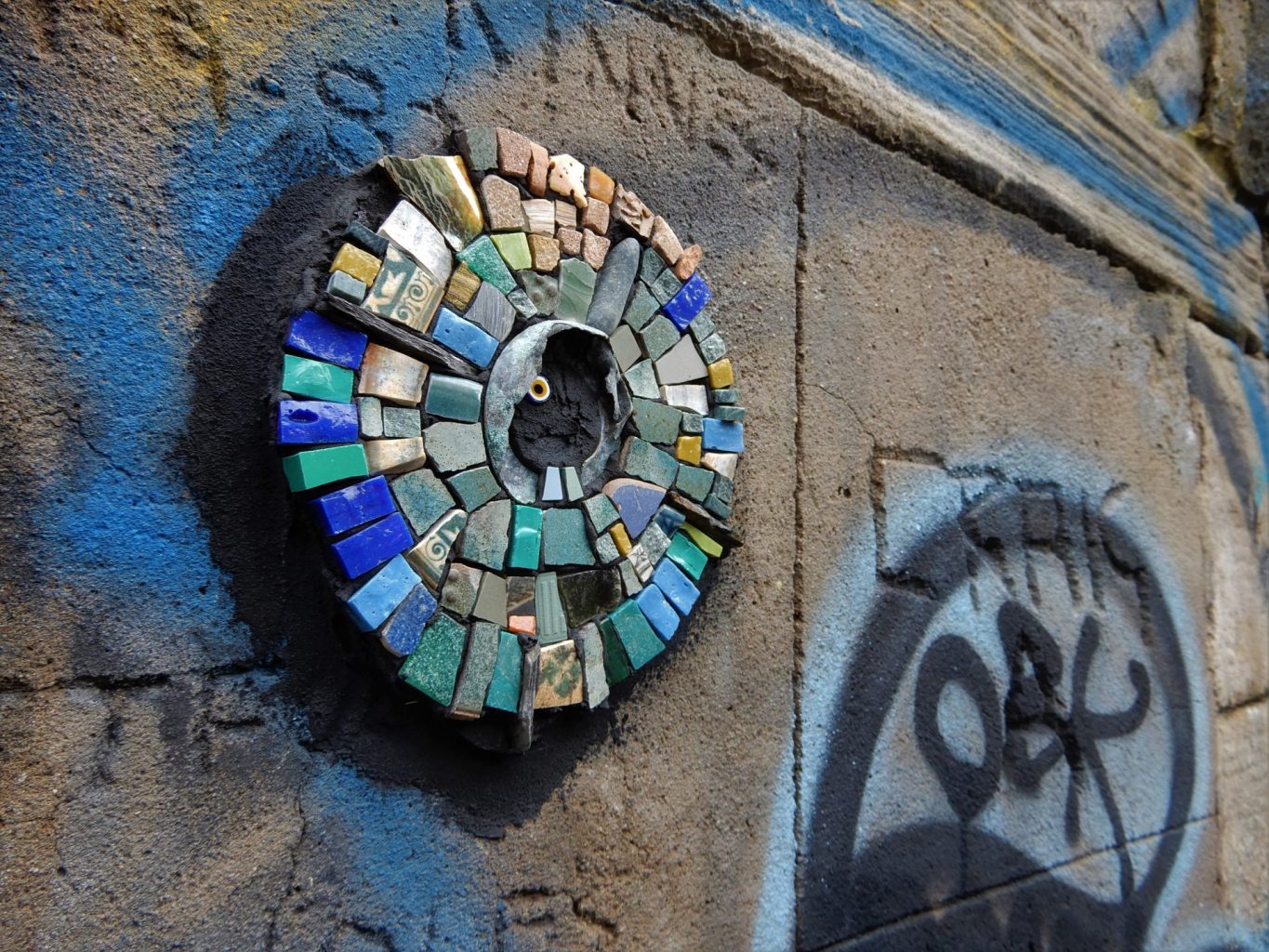 I started making graffiti mosaics in 2017. I had returned to Edinburgh from Athens the previous summer and needed to rebuild my life from scratch.  Mosaic wise, that is. But really pretty much everything else wise too. My husband was still working in Greece and two of the boys had headed off to university. My youngest son was at home but I had none of the invisible networks that connect a person to a place; the layers of knowing that we take for granted until they are no longer there. Having lived away from the UK for 30 years, I also needed to adjust to what felt like a new country and an even newer city.

I came back laden with my mosaic tools and materials and nowhere to put them. We moved into a second floor flat in the centre of Edinburgh which could scarcely accommodate us never mind the accoutrements of mosaic making. There was no point in trying to whittle down my collection of tesserae and rocks, I simply couldn’t be without them. Each had been carefully acquired, gratefully received or lovingly collected with a sense of its mosaic after-life lying latent in its colour or form.

Finding a studio space wasn’t easy. My first rental was so small that I had to choose between squeezing my materials into it or squeezing myself. The second was larger, with glorious inbuilt shelves but the rain dripped disconsolately down the walls and despite my best efforts, including virtually sitting astride the heater, nothing could keep the chill out.

It was during those early days in Edinburgh that I began making and installing graffiti mosaics. My inspiration was the graffiti mosaic supremo Jim Bachor of Chicago. Bachor began making graffiti mosaics as a way of helping solve the problem of pot holes in the city’s roads. He made his mosaics in reverse in his studio and then went out in a high viz jacket with a few traffic cones and filled the holes, capping the newly laid concrete with a little mosaic offering.

An ice cream sandwich, a Burberry fabric fragment, sweet wrappers, a crushed Coke can and a dead rat are all immortalised in glass in various locations around Chicago and then later elsewhere in the world. They are much admired and visitors to Chicago, like me, can get the ‘Bachor Map‘ and go out to spot mosaics which haven’t been concreted over by subsequent, less creative, road fillers.

My motivation for making graffiti mosaics was less public spirited. I had left behind a modern  metropolis in southern Europe where it was not uncommon to chance upon fragments of ancient mosaic during weekend strolls and every poured concrete neighbourhood church boasted at least one Byzantine-style mosaic saint.

From there, I was catapulted into a Northern UNESCO World Heritage city renowned for its early 19th century architecture. It seemed to me that despite its self conscious elegance, Edinburgh lacked one essential ingredient.

Moreover, ever since reading about Bachor’s pothole installations I have been attracted to the positioning of mosaics – these traditional, millennia-old creations which take silly amounts of time to make – against the quick, ephemeral nature of street art. The twinning of these two ways of interacting with the world appealed to me.

This appeal comes with  a deep and almost desperate desire to introduce the world to mosaics. Hence this blog. I feel that people don’t know enough about them, don’t recognise or acknowledge them, and need to be reminded of their power, beauty and necessity. I also, let’s face it, had no commissions, no community and no other way that I could make my presence known.

I started with a mosaic eye on Calton Hill, the eroded remains of a former volcano on Edinburgh’s eastern rim, whose steep slopes reward tourists and residents with 360 degree views of the city. I made the mosaic in Winckelmans ceramic on mesh and installed it with outdoor grade tile adhesive on a rock looking out over Arthur’s Seat and the Pentland Hills. The only point of it, if you can call it a point, was to nudge people to look outwards. It wasn’t long before someone gauged the pupil out with a hammer and a few years later the rest of the mosaic was chipped away.

Next followed a mosaic speech bubble also on Calton Hill. I added the mosaic to a long-established graffito of a sullen girl in a woolly hat painted over a bricked up doorway. ‘Why me?’ the bubble asks. I get up ludicrously early to install my graffiti mosaics and take Farook with me. He sits in the grass looking serious while I get on with preparing the surface, spreading the adhesive and installing the mosaic. 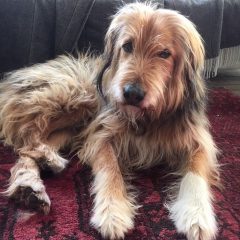 The first few times I did it I was petrified. Every siren was a speeding police car sending a squad to arrest me. When I was installing ‘Why Me?’, I heard the sound of heavy footsteps pounding towards me and thought my time was up.

I turned, heart racing, as the steps neared me and could sense the discomfiture of the young man – an off duty police officer perhaps – who stood before me. Calton Hill is known for all sorts of unsavoury activity, including drug dealing, and when he saw a hooded figure in the half light of dawn acting oddly in a door recess he must have assumed the worst. What he found instead was a middle aged woman who bade him good morning and an amiable dog wagging his tail. The man greeted me awkwardly and continued on down the path. 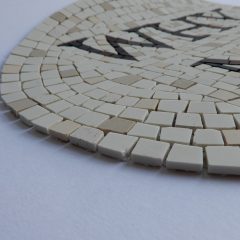 At this point, I was also thinking that perhaps I could make mesh mounted mosaics for sale; smallish works which people could install themselves at home if supplied with some easy to follow instructions. Ever since I began making mosaics more than 15 years ago, I have been on the hunt for a perfect formula to make money from mosaics. This was one of a series of schemes with the idea being that if people could see them in situ then they could imagine them in their own spaces. 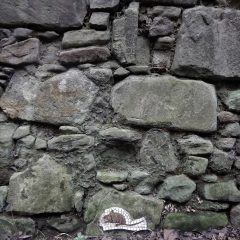 I made a little mouse, plucked from an Unswept Floor, and sent it scuttling down an Edinburgh wynd; a wall mounted key as a comment on those barred from entry to the spacious private gardens which adjoin Calton Hill and a stray mosaic ball bounced over from the tennis court in the same gardens.

Then I began to venture further afield, feeling that any dark and unloved part of Edinburgh which graffiti artists already use as their canvas, could only be enhanced by graffiti mosaics. The bunch of Byzantine-style flowers above, loosely based on flowers growing under the feet of saints in the Basilica of San Vitale, Ravenna, appeared in Scotland Street tunnel – an old railway tunnel now used as a walking and cycling path.

By this point, I had moved into my current and much loved studio at Out of the Blue Abbeymount. My space is in a former classroom on the first floor of a 19th century school building. The process of carrying box after box after box (after box) of heavy stones up the two flights of stairs was so gruesome, and the shelves I put up to display my materials so pleasing, that I felt that I had finally arrived home.

Next came a large black mosaic bird wearing red stilettos on the side of a stone bridge over a Victorian cemetery where crows gather, squawking in the trees. I discovered that someone had written a poem in Scots about the bird and gone to the trouble of wrapping it in plastic and leaving it propped up next to the mosaic. The tension from so many years of not-belonging began to ease.

There followed a Roman head, an interpretation of one of those ubiquitous mosaics beloved by the ancients which personify the seasons. In the original version, Spring invariably has flowers in her hair and looks cheery. Mine is the Personification of Spring in the Age of Climate Breakdown and shows a gloomy woman puffing on a fag end. She is to be found under an archway off one of the central streets of Edinburgh where she can smoke out of the rain and without prompting disapproving tuts.

At this point something happened that gladdened my heart so completely that the fear and anxiety about installing random graffiti mosaics in public spaces entirely vanished. Someone graffiti-ed over the ‘Why Me?‘ mosaic, daubing ugly slogans in red paint across both the painted girl and the speech bubble.

Graffiti mosaics are offerings, small ways to lift and hold the gaze; they are left for people to do with them as they wish. I am not proprietorial about what happens to them so I thought nothing of the spoiling of ‘Why Me?’ but felt a pang of sadness for the loss of the sullen girl.

Then a friend spotted a city council worker in a boiler suit clambering up Calton Hill with cleaning materials and a pot of paint. He scrubbed at the red slogans and painted over the ones he couldn’t remove so the mosaic is still there and the girl too. Oh, the joy that gave me!

By this point I was teaching at Abbeymount and working on commissions. Graffiti mosaics ceased to be a top priority although I did make another one called Here Lies for Warriston Cemetery. Here Lies is about the carefully chosen inscriptions we carve on grave stones, inscriptions which are soon swallowed by lichen or obscured by ivy wiping away the memory of those we loved so fiercely.

When Covid-19 struck and classes and commissions were cancelled, I began work on a series of mosaic ‘viruses’. The idea was to use the  empty hours by rummaging through stashes of unused materials, exploring new ways of working and experimenting with colours and textures. The mosaics would be installed around the city as a reminder of these strange days. If you are interested in  making one yourself, here are some ‘how to’ instructions: https://helenmilesmosaics.org/mosaic-projects/how-to-make-a-mosaic/

Meanwhile, there are other Scottish graffiti artists out there, busy embellishing their towns and cities. Marilyn Rattray has done a series of mini mosaics around Dundee, leaving markers in random spots; eye catching abstracts or mosaics incorporating the helpful ‘YOU ARE HERE’ reminder for those who might not be sure.

Joy Parker of Selkirk has made a number of themed mosaics in vitreous glass on mesh for the narrow, dreary ‘vennels’ (passageways) of her town. Joy’s mosaics are based on the pictorial language of the tribal Warli art from Maharashtra which she was taught by a friend visiting from India. “[The language] is so versatile and creative,  depicting  whole scenes and stories using only white for the figures, houses, trees etc against a teracotta background – this seemed perfect in its simplicity and clarity for what I wanted to do,” she explains.

Long may Marilyn, Joy and others like them continue!

GET MAKING: How to make a mosaic ‘virus‘ – a step by step project for these stay-at-home Covid days.