There are plenty of mosaics in Chicago. From ornate mosaic floors in turn-of-the-century municipal buildings, to Marc Chagall’s famous Four Seasons mosaic, subway station platforms, community art projects and Jim Bachor’s iconic pot holes – Chicago is a great city to explore if you want to see the best of the art form.

Mosaics in Chicago_ lifting you out of your world.

I had been told to take the blue line from O’Hare airport and to switch at Jackson. It was the beginning of a week-long stay in Chicago to attend a five-day mosaic course at the Chicago Mosaic School and I was new to the city. Discombobulated by the intercontinental flight and disgruntled by the discovery that my suitcase had lost a wheel, I heaved the recalcitrant case out onto the platform and perched on the end of a wooden bench to wait for my next train. Nearby a street performer with a drum kit started to play and a man began to dance. Think of a man who’s had a hard life, sunken faced, in clothes that needed washing, then think of him moving, twirling in the current of the music, shimmying and smiling downwards, intent and lost to everything but the moment.

That’s what the mosaics in Chicago are like, dear readers. They are incidental, unexpected, unselfconscious and transformative. They lift you out of your little world and give you a glimpse of another reality. They dance.

They do what mosaics do best – manage to be both profoundly ordinary and extraordinary at the same time. However, just as I might so easily have missed my soul-wringing platform dancer, so I might never have had the chance to see some of the best mosaics in Chicago were it not for the kindness of a local artist, Kat Powers, who took me on what she described as a mosaic scouting adventure. ‘Adventure’, it later transpired, was a misnomer. We were on a magical mosaic mystery tour.

The first thing Kat did when she pulled up to the curb, was fish out a folded piece of hand-written paper with a list of the addresses of Jim Bachor’s Chicago pot holes. Same wave-length? Tick. The adventure was beginning.

Jim Bachor‘s pothole mosaics, for those of you who don’t know, are just that: glass and marble mosaics made to fill potholes in Chicago’s crumbling streets. Why? Because potholes are a nuisance and ugly but a pothole with a mosaic in it solves a practical problem and creates a thing of beauty at the same time. Bachor’s pothole mosaics, which include such themes as ice cream sandwiches and Burberry check, are now celebrated and recognised world-wide. You can join an official Bachor Pothole bike tour, get a pothole t-shirt or even buy a limited-edition pothole print.

To go a-Bachor-pothole-hunting you need to get into the right mind set. Instead of outdoor museum, think wildlife safari. We bumped along those infamous pot-holey Chicago streets, walked up and down suburban streets and climbed over road work barriers in our search but the potholes were not always where they were meant to be. The wear and tear of traffic and the addition of new layers of tarmac, meant that many of the holes have now vanished, sometimes leaving behind faint residues of their former glory – the contemporary version of ruined Byzantine floors, testament to a presence and an indomitable spirit clinging to the cliff edge of extinction.

I must admit to harbouring a faint disappointment. I had loved these pot holes from afar and wanted to see them. I am intrigued by mosaic interventions in our rural and urban landscapes, and these are land art for mosaicists, exhilarating and mischievous, our own version of a Richard Long pathway or a sinewy Andy Goldsworthy wall. I thought that that was that. We’d done the scouting; the adventure was over. What I hadn’t fully grasped was that I was in the hands of a miracle worker who took up where the platform performer left off and led me on her own dance with the same casual ease and self-deprecating ability to surprise and delight.

Next stop: Marc Chagall’s Four Seasons mosaic. As we wondered up the street afterwards, Kat suggested we put our heads around the door of the Chicago Athletic Association Hotel. You know, just casually pop in, in case there might be something interesting to see. If I had been Kat, I wouldn’t have been able to contain myself. I’d have been hopping about and saying ‘just you wait until you see this’ but Kat is a very cool cucumber. 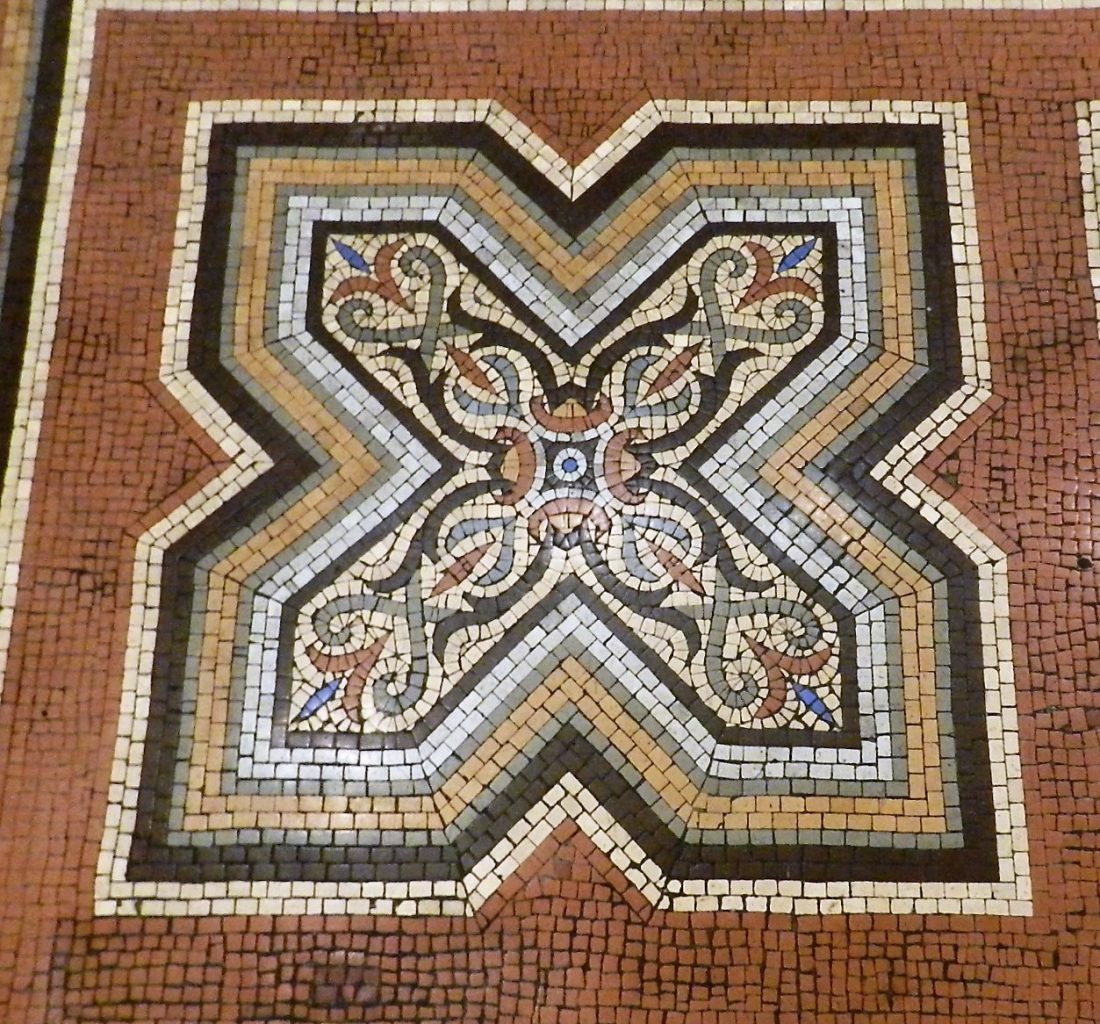 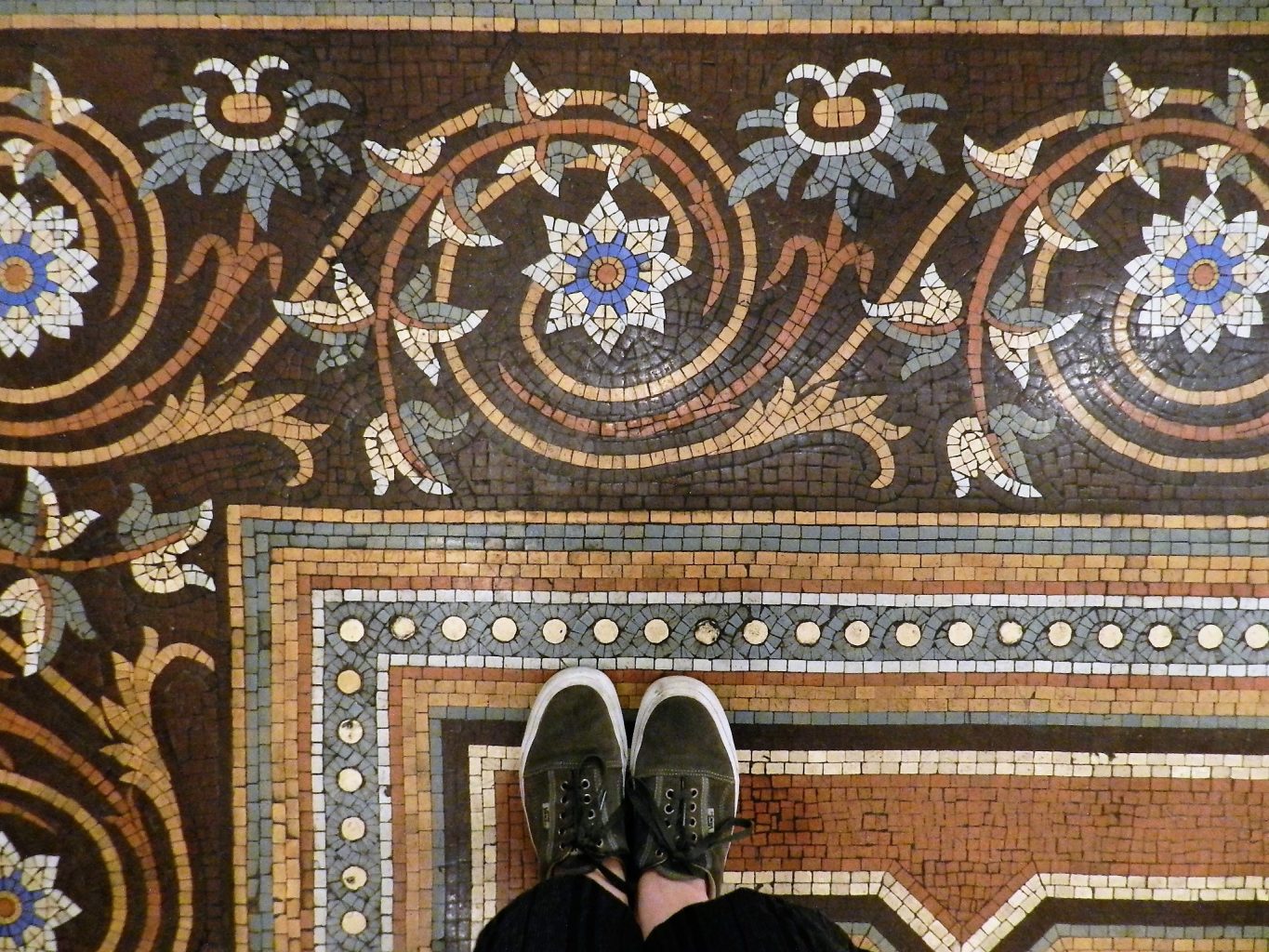 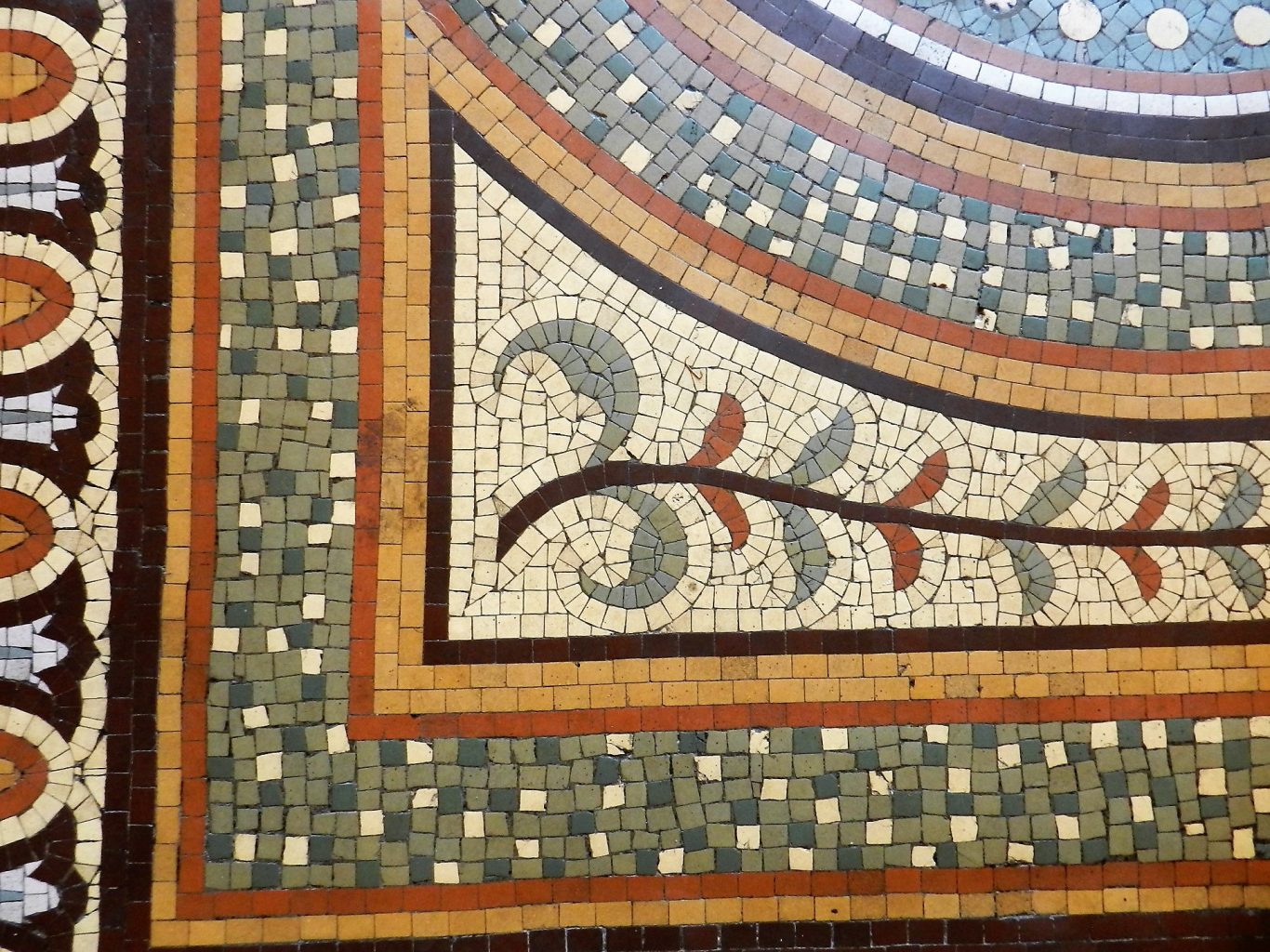 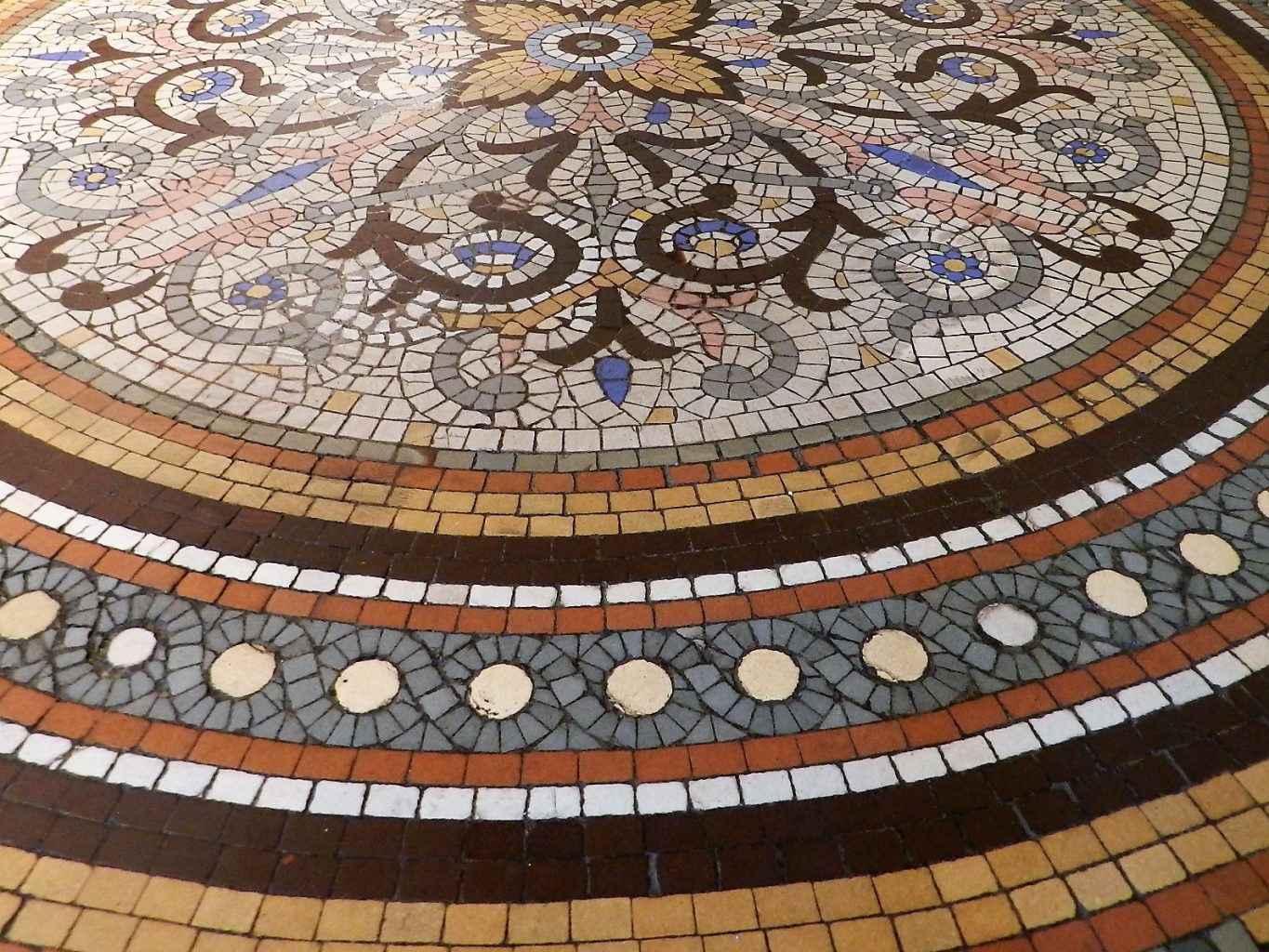 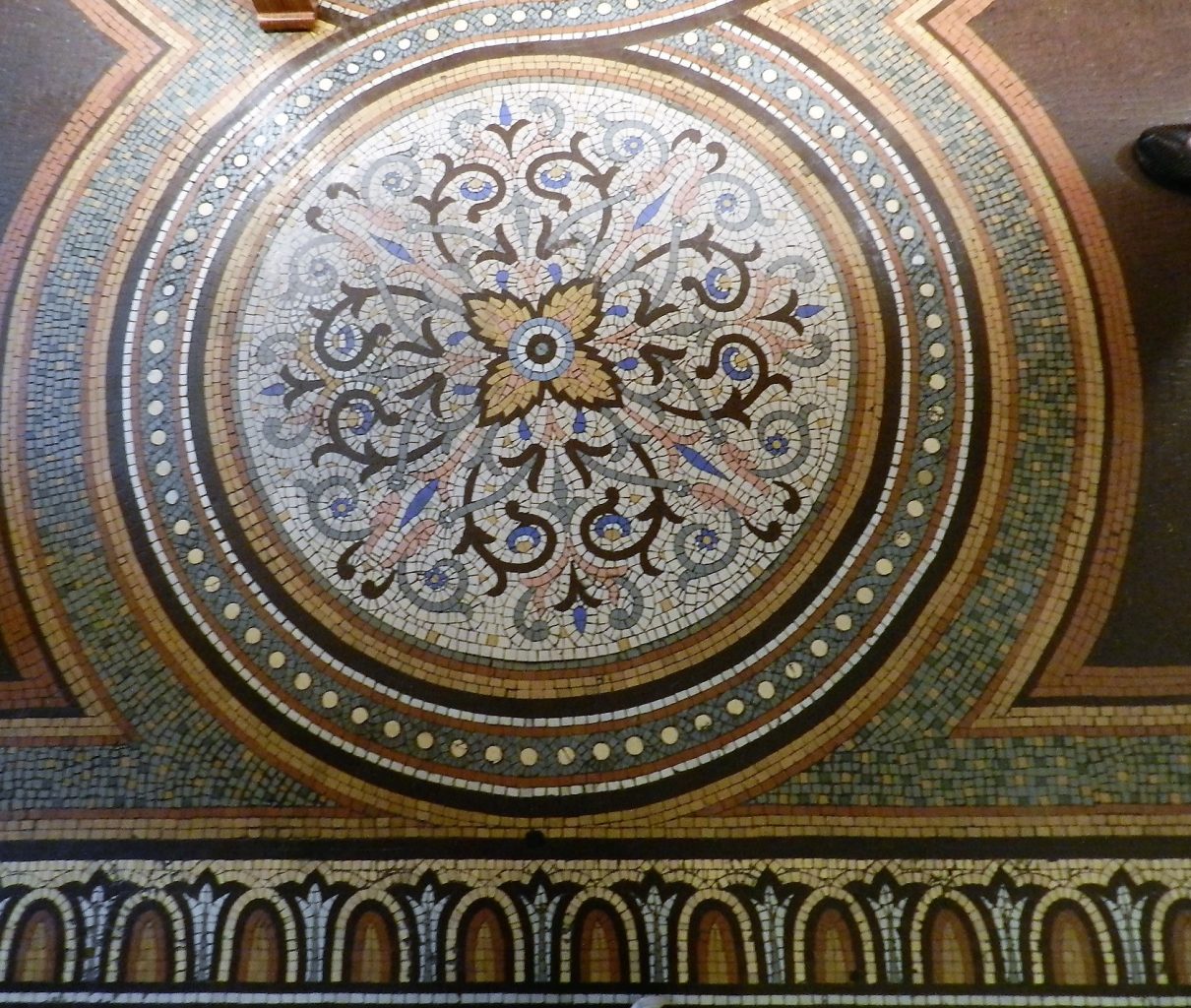 Built in 1891, the floors of what was once a private club designed by Henry Ives Cobb in the style of a Venetian gothic palazzo, are covered in 26,500 square feet of original marble mosaic flooring. They might have been lost for ever after the club closed permanently in 2007 and developers suggested demolishing all but one third of the building, but the Hyatt group stepped in and turned the club into a hotel and the floors are there; gloriously, permanently, walk-all-over-them there.

The day was advancing. It was probably time to wind up. Kat said she needed to check out something at the Chicago Cultural Centre and then we’d head back to her studio. Once again she took my hand and whirled me, light toed and laughing, across the room. I hadn’t the faintest idea that the innocent sounding cultural centre built in 1898 was once the city library and is absolutely covered, from top to bottom, from expansive floor to soaring ceiling, in mosaics; in coloured stone, intricate inlay, Carrera marble, gold, and Tiffany glass. I couldn’t decide which was more astonishing, the mosaics or Kat.

The story goes on. Kat knew where all the best mosaics could be found. She told me to go see Bachor’s mosaic at the Thorndale metro station near the Chicago Mosaic School in Edgewater which was made in 2014 from smalti and ceramic. Named ‘Thrive’, Bachor has superimposed local history and landmark buildings on stalks of wild rice once harvested by Native Americans in the area. References to contemporary life – a takeaway container, a coffee cup, cyclists and a beach chair – are also brilliantly blended into the composition.

I even stumbled across a few mosaics on my own including this one called ‘Street’ which was made by Kyungmi Shin and installed at the Granville Street metro station in 2014.

And I loved walking past the Green Star Movement mosaic outside Whole Foods on my way to the Chicago Mosaic School every morning.

But I would have never seen a fraction of the mosaics in Chicago without Kat, my dance partner, to whom I can only say a big bright mosaicked thank you for an unforgettable day.