This is a short version of the British Association for Modern Mosaic’s guide to the mosaics of Scotland which was compiled to coincide with BAMM’s annual Forum in Edinburgh on September 30 and October 1, 2107. The full guide is available as a pdf through the BAMM website.

As a member of the BAMM Forum 2017 Organising committee I am absolutely determined to drag you up to Scotland, kicking and screaming if need be. So as part of my coercion strategy I have helped write a guide to the mosaics of Scotland but unless you actually come, unless, quite frankly, you get your ass into gear, I am only going to give you a tantalising taster of the real thing. The unabridged version, the bells and whistles one, will be available to BAMM members on the association’s website as a free pdf closer to the time of the Forum and to Forum attendees as a handout. Are you seriously telling me you can resist?

It will be the first time that the forum has been held outside of London and is open to members and non-members alike so this is a great opportunity to visit Scotland’s capital city and immerse yourself in mosaics for a whole weekend. The Forum includes six prominent speakers who will talk on a range of interesting mosaic topics, four short talks by mosaic artists (including me!) about their mosaic journeys, a social evening for mosaic lovers, a day of workshops and lots, lots more.

For full details about the Forum go to the BAMM website: http://www.bamm.org.uk/. Tickets are available through Eventbrite: https://www.eventbrite.co.uk/e/bamm-forum-2017-mosaic-a-celebration-of-design-expression-colour-tickets-33142545245.

The guide is intended for people who would like to explore the mosaics of Scotland by themselves and it covers a variety of noteworthy mosaics from Maggy Howarth pebble mosaics, to a Nikki de Saint Phalle pediment in central Glasgow, out of the way murals by Scottish artist George Garson, 20th century public buildings, off the beaten track churches and ordinarily extraordinary shop entrances. The complete guide (the one you can only get by being a BAMM member or by coming to the Forum) is fuller, wider, and deeper and covers mosaics as far away as Ullapool and Loch Inver.

The guide is divided up into geographical areas so that you can find the ones near you. The mosaics are listed within each area alphabetically by artist or by location, if the artist is unknown, so that you can plan your own mosaic trail. Those mosaics which are described as being ‘near’ Edinburgh or Glasgow are close enough to be reached in less than an hour’s drive from the respective cities.

In many cases the mosaics are located in public buildings, shops, cafes and churches. Access to the mosaics in these cases is dictated by the buildings’ opening hours which need to be checked individually. Elsewhere, the full guide includes notes about relevant access restrictions.

The Guide to the Mosaics of Scotland wouldn’t have been possible without the BAMM Forum 2017 Committee whose ideas and input were crucial and in particular without mosaic artist Dugald MacInnes who took me to many of the sites and whose encyclopaedic knowledge of the mosaics of Scotland was invaluable. 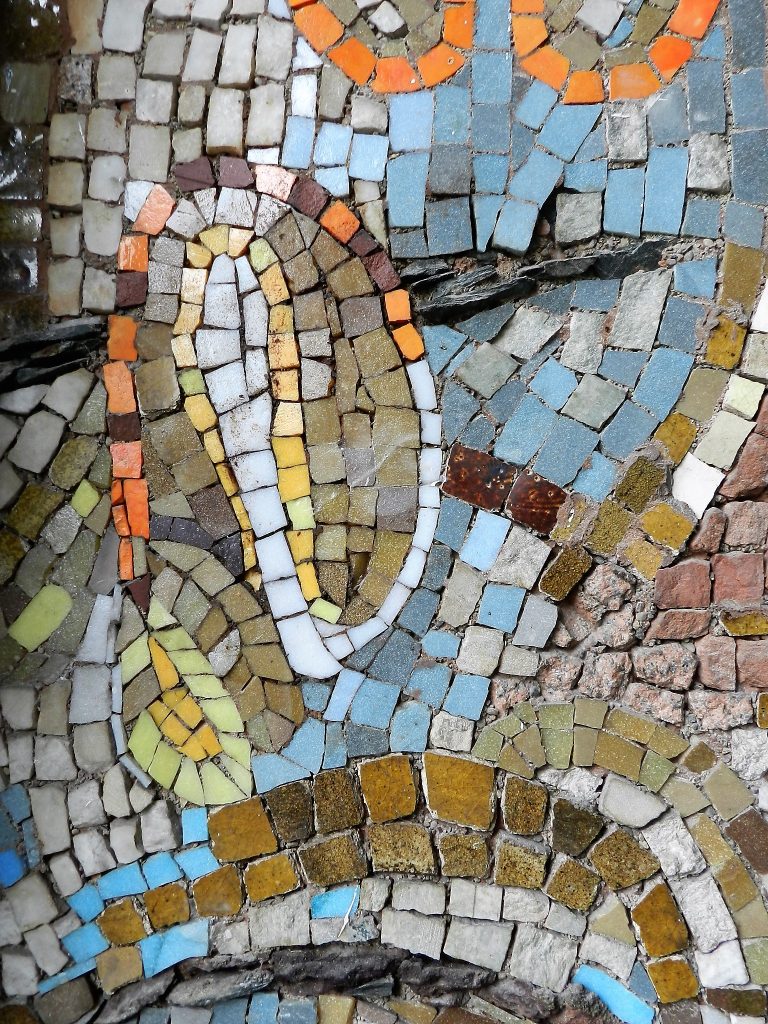 MAGGIE HOWARTH, next to the Scottish National Portrait Gallery, 1 Queen Street, Edinburgh. EH2 1JD.
A pebble mosaic of Scottish fauna and flora in a courtyard to the right of the portrait gallery. 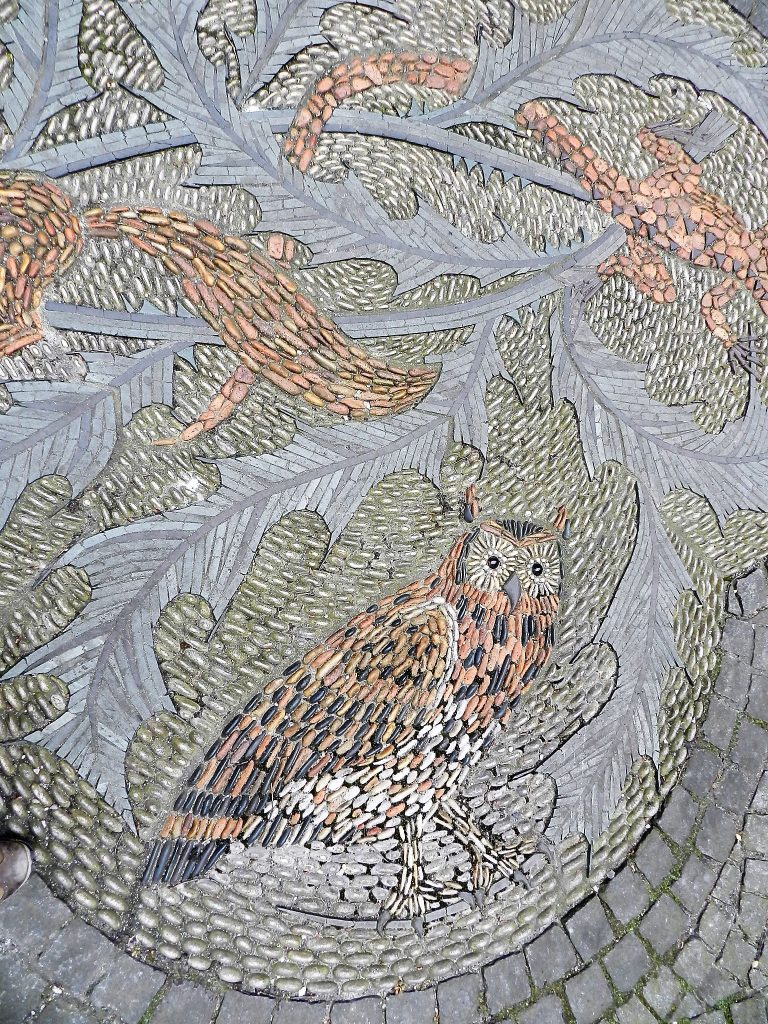 LEITH WALK MOSAICS, arterial road running from central Edinburgh to the port of Leith.
There are a number of threshold mosaics along the Walk and on Great Junction Street and Duke Street at the end of the walk. This is just one of them:

Mosaics of Scotland: MOSAICS IN THE EDINBURGH AREA

The memorial is dedicated to Gwen Mayor and the 16 children who were killed in the Dunblane Massacre in 1996 and includes a pebble mosaic by Howarth with the names of the victims.

GEORGE GARSON, School of Geographical and Earth Sciences, Gregory Building, University of Glasgow, Glasgow, G12 8QQ.
Large abstract wall mosaic mainly in stone. The mosaic was made when the department was called the School of Geology and contains interesting stone details including fossils.

Mosaics of Scotland: MOSAICS IN THE GLASGOW AREA

ALEX FROST, The new Easterhouse mosaic.
Twenty-five metre mosaic mural made with polished and natural finished porcelain tiles. Made in 2012 to replace an original community mosaic which was torn down in 2004.

For more appetite whetting reading material before the BAMM 2017 Forum, go to my last blog post on the Eduardo Paolozzi mosaic fragments: http://helenmilesmosaics.org/blog/paolozzi-mosaics/