The Nature of Mosaics:

A New Theory About What Makes Mosaics Different.

I have a new theory about the nature of mosaics. Hold on, stop right there. Don’t flick forward quite so fast. This theory has been bobbing around in the back of my mind for some time and I don’t have anyone to try it out on, so I need you to bear with me. You, my fellow mosaic makers, are the only ones who can help me decide whether this theory has a kernel of truth in it or is just the fantastical workings of a mosaic obsessed mind so I humbly request that you read on.

My theory about the nature of mosaics is not particularly complicated and certainly not at all profound so I wont keep you long. In many ways it is a peeling back of an earlier post, There’s no world without mosaics, which explored how tessalated patterns can be found all around us in the natural world and in man made constructions (walls being the obvious example).

And yet, when I see an actual mosaic, one which has been deliberately made, I am moved, I am soothed. 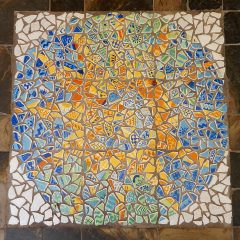 It could be small, inconsequential and badly put together but never the less something inside me lurches in delight before critical thought and personal taste kick in. At first I assumed that this is purely because I love them. After all, I have a version of the same feeling when I walk into the sitting room and the dog, stretched out in the morning light, thumps his tail in welcome without looking up. 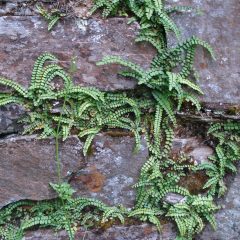 But this would not explain why all mosaics produce the same reaction in me. It is only my dog that delights me, my children’s hair that I want to ruffle. So is it art that is moving me? Again, no. I may go to a museum and among the thousands of exhibits, the galleries of paintings, there will be only some that catch my attention and hold me and, besides, a damaged mosaic fragment not good enough to warrant even being kept indoors cannot be called art simply by dint of being old or being a mosaic.

The nature of mosaics _explained.

And then I hit upon the idea that perhaps this feeling comes from the inherent nature of mosaics: the world and everything around is either particulate or cellular. All of it, from the table I am writing at, to the hands that hit the keys, to the motes of dust in the air, all is made of parts, particles and cells. Ever since the invention of the microscope we have been able to look into the underlying structure of the world and see. What? Mosaics, of course. Budding and dividing, building and boiling, expanding and splitting, a seething, invisible universe of bits that come together and make something new. Or as Alexander Pope put it in his Essay on Man: ‘All are but parts of one stupendous whole,/Whose body nature is…’

Looking at a mosaic, this fracturedness of nature is made manifest. You see at once that a mosaic is composed of parts, the eye momentarily tracks the individual pieces before reassembling them visually. It is this tiny pause, the imperceptible moment of stillness between seeing the parts and seeing the whole which connects our response to mosaics with our response to nature. Lying on the lawn on a summer’s afternoon and looking  up through the trees, at first you notice the canopy, secondly the individual leaves. Climbing a church tower, you take in the view and then see the roof tops and field divisions. With mosaics you see the parts before the whole and with nature it is the other way around but the processes are closely linked.

Yet, from the earliest stages of human civilisation, we have striven to make things that defy the natural world, that escape or obscure the fracturedness that I am talking about. Whether it’s the alabaster clad pyramids of Egypt, concrete facades, glass walls, sheet metal panels, or expanses of asphalt, many of our proudest and most impressive structures have flat, dead, inanimate surfaces. Surfaces which can only be human.

As for art, we endlessly create things: marble sculptures, bronze ceremonial vessels, embossed armour, painted porcelain, stone carvings, illuminated manuscripts, totem poles, embroidered textiles, painted landscapes, the list goes on, but all assert their humanness, their clever, gorgeous, beautiful, conceptual difference from that natural world. It is only mosaics, flagrantly and openly fractured, that mimic and reflect nature, making them both deeply human and deeply affiliated to something greater, more universal, more real.

Open any scientific text book and it will be illustrated with images of the structures and interiors of things – planetary arrangements, cellular formations, the segmented parts of organisms. Google contemporary mosaic artists and you will see an unconscious reflection of these innate patterns in their work, as if they are driven to make manifest the neural paths of our bodies and the complex hidden worlds of micro biology.

If art is bound up with the notion of artifice then perhaps this is why art historians peer haughtily over their half-moon glasses and refuse to acknowledge the place of mosaics in the history of art, or why mosaics struggle to be recognised as contemporary art. Mosaics are proudly and unreservedly bitty, their bitty-ness is their point and their nature.

I’ve finished theorising. Mull it over and write back if you wish. I always love to hear from you.