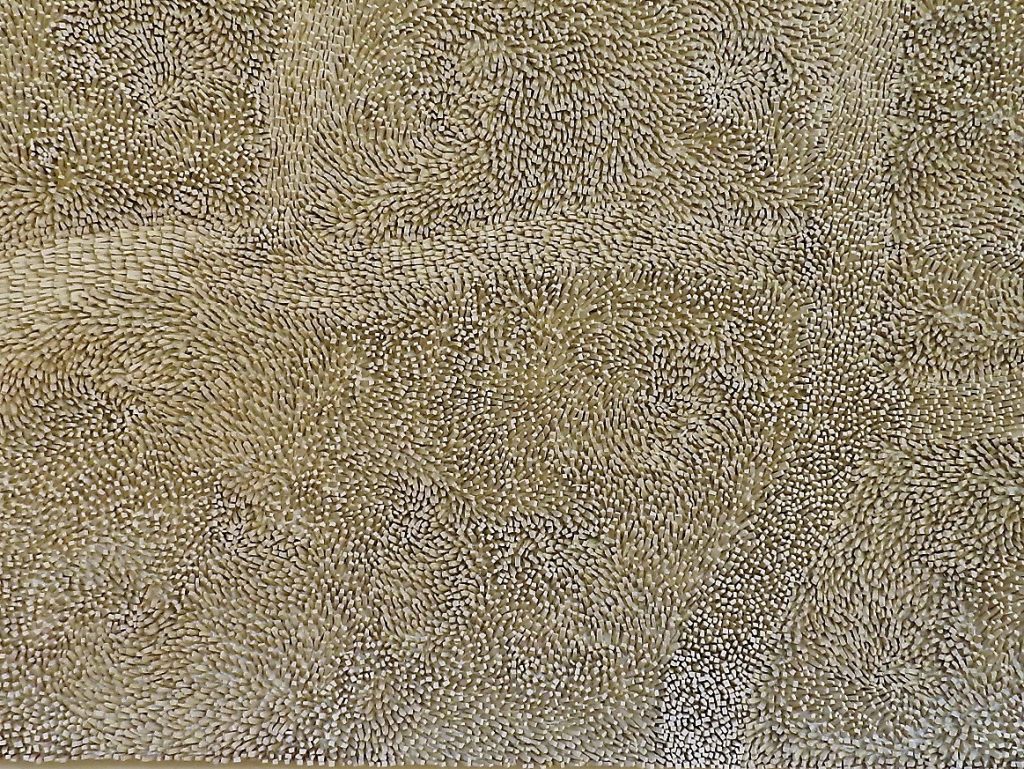 Part III of a three-part post on contemporary mosaics.

Part I Highlighted the particular properties of mosaic by demonstrating what mosaics are not.

Part II Examined how contemporary ceramics have broken down the barriers between art and craft and how the material used is less important than the ideas behind it – an obvious lesson for mosaic artists.

This post will look at how contemporary mosaicists are creating work ‘which uses the medium of mosaic, but not to make us think ‘that is a mosaic’ but to make us curious, to amaze us, to unsettle us, to take us, in short, by the scruff of the neck and say: ‘Look, look and look again. I have something interesting and exciting to say.’ 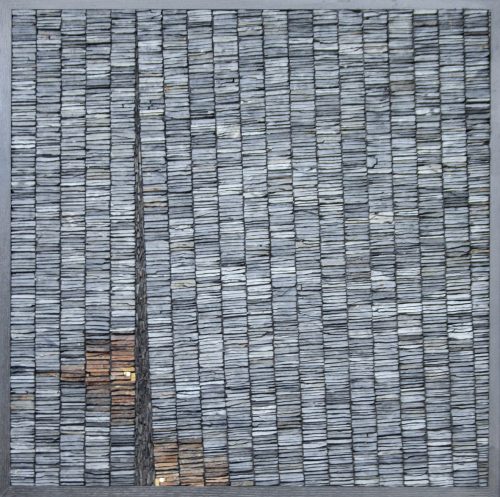 The time has come to look at the world of contemporary mosaics, at the mosaic innovators of our time: the explorers, the risk takers, the convention-shatterers, the beauty-creators. They’re there, they’ve always been there, hiding in plain sight, being exhibited, winning awards, attracting acclaim and attention – but only in certain circles.

It’s as if mosaics are somehow considered fringe – a little bit out there – despite the fact that thoroughly ‘in there’ artists (Damian Hirst, Ai Weiwei, Bridget Riley, Fahrelnissa Zeid, Santiago Montoya, Andy Goldsworthy, the ceramicists Sandy Brown and Barnaby Barford to name but few*) manifestly use mosaic-like techniques in their work and are celebrated for it. Where once there was a polite murmur behind the door, there is now a jostling and a clamour as contemporary mosaic artists get restless. It’s time for mosaic innovators to be seen and heard. 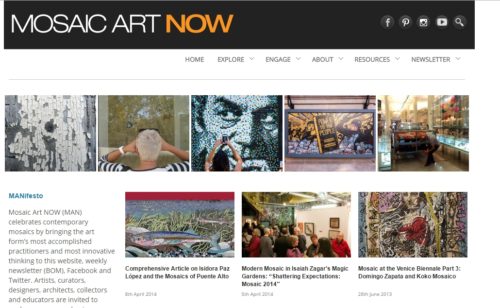 But before I go any further on the subject of mosaic innovators, I must say one thing: Mosaic Art Now. For most of you that’s all I need to say. There may still be a rare few who haven’t come across this terrific website run by Nancie Mills Pipgras which champions and showcases contemporary mosaics. If imitation is the sincerest form of flattery than let this to be my tribute to MAN and my whole hearted acknowledgement that it was to MAN I went and to MAN I return when I want to see some of the best that this art form has to offer. 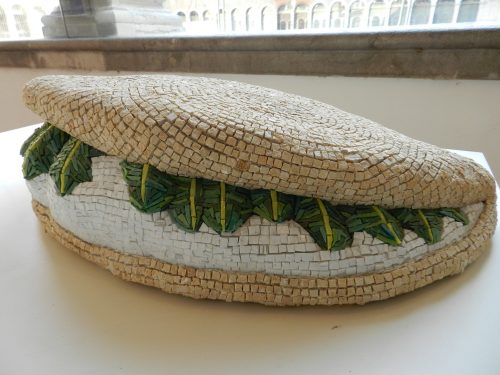 Let’s start with an example that steps lightly over the invisible and arbitary barrier that separates mosaics from art: Samantha Holmes’ mosaic ‘Unspoken.’ The piece won the 2011 Banca Populare di Ravenna Award for Use of Unconventional Technique and Materials award in Ravenna and is a work about the frustrations of expression in a foreign language. Each bit of folded paper wrapped in wire holds an idea or thought left unsaid during Holme’s early months in Italy before she could express herself confidently in Italian. The arrangement of the notes in horizontal rows is reminiscent of the conventional laying pattern of tesserae.It’s an elegant and eloquent work of art. 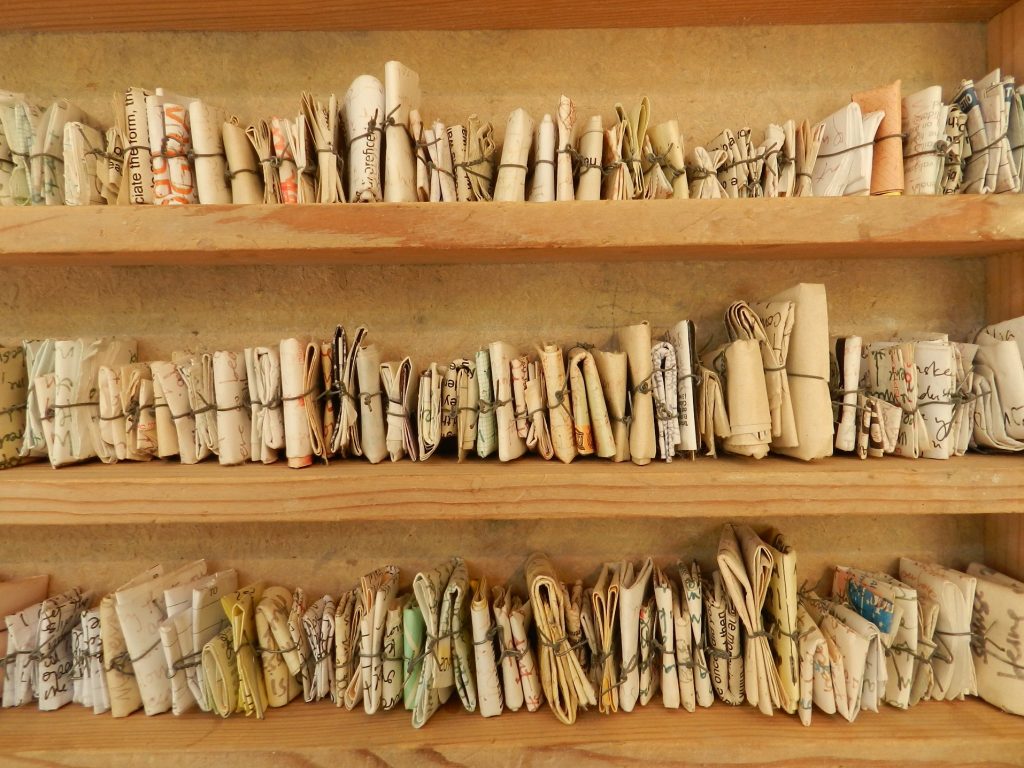 It’s worth starting with this work because it describes the distance between the achievement of contemporary mosaicists and how they are perceived. It demonstrates that mosaics have narrative, they have soul and story, context and importance. They have, like other art forms, the surface of the thing and the ideas behind it. In Samantha Holmes’ case the narrative is plainly expressed but of course this is not always the case. There may be plenty of mosaic artists who say: ‘ My mosaics are saying this in order to bring attention to that’ but narrative can also mean a striving, a yearning, an inarticulate struggle. Things, as we know too well from our messy lives, cannot always be said. That’s why we have art. That’s why we have mosaic innovators.

Take Julie Sperling whose exquisitely crafted mosaics are the result of her clearly defined postion ‘camped out at the intersection of art, environment, science and policy’. They can be appreciated for what they are, works of art, or decoded to unlock her eloquent messages about the impact of humanity on our planet.

Julie uses the process of making mosaics, the accumulation of parts to form a whole, to draw attention to important environmental concerns. In her hands, we see that mosaics give the artist ample room for expression and are no more confining than the process of applying paint to a canvas. Why should they be? Whereas paint is paint, and clay is clay, mosaic and its materials are almost limitless. Many mosaic artists use the classic selection of stone, glass, smalti, and ceramic but others incorporate foraged and found materials with almost limitless possibilities. Artists like Julie (Canada) and Rachel Sager (USA) pick up and use whatever comes to hand. Paint layers (above), coal, a firehouse cap, Native American arrow heads, computer components, piping, deer antlers, tools, drift wood…the list goes on.

Indeed it is the materiality of mosaic which is often central to their narrative: ‘We work in pieces, not paint. Tesserae, not clay. The inherent heaviness in these pieces of things provides us with the challenge of creating the illusion of lightness. There is no one solution to this challenge. The beauty of the problem lies in the unending ways an artist can create that lightness and elegance of line,’ writes Rachel Sager whose work reflects her fascination with lines – where they lead, their intent, their possibilities. Like Richard Long’s pathway through a field, Rachel’s lines have also become physical interventions on landscape: she took over an abandoned coal mine in 2015 and created the Ruins Project, an ambitious, evolving plan to turn the walls of the derelict buildings into a collaborative mosaic installation. 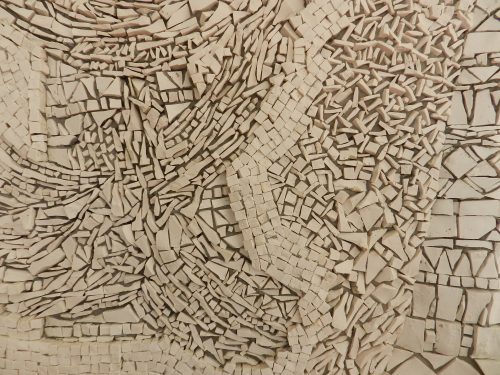 Other mosaic innovators turn this sort of experimentation upside down, stripping away all superfluity, to focus on the singular. CaCO3, a trio of graduates from Ravenna’s School for the Restoration of Mosaics, produce works so pared down the result is like a single spotlight on a darkened stage. The eye hones in on the tesserae – single, collective, single, collective – akin to watching rain drops on a window, producing an effect which is as visually calming as much as it is intriguing.

Edinburgh based artist Joanna Kessel, who recently exhibited at the London Design Fair, is also drawn to simplification, using less to suggest more. She employs flashes of strong tessalated colour in contrast with smooth monochome surfaces to lead the viewer to consider the juxtaposition of things and how we see the world around us. Her work is both restrained and expressive, quiet and forthright. She is, moreover, a mosaic innovator in more ways than one: Joanna has crossed the divide – by being chosen to represent Scotland at the London Design Fair along with other regional designers and makers, she has taken mosaics into a new realm and shown how they can be appreciated and applied at large. 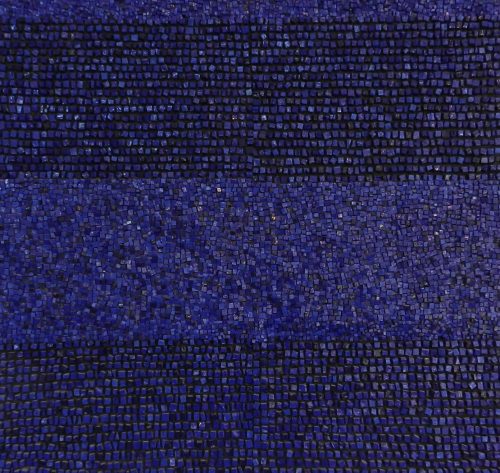 I could go on (and on, and on) but truth be told I tried not to write this post at all. I put it off and fiddled about and went away and did other things because the subject of mosaic innovators is too big  – it’s as limitless as the work that contemporary artists are producing. So this isn’t even a summary, not even a toe dipped into the world of mosaic innovators. Go surf the internet, follow leads, look up your favourite artists and you’ll see for yourself. All I wanted to do was give the age-old dialogue a little nudge in a new direction – to move it away from the question of whether or not mosaics have been accepted by the art ‘establishment’ (they have, but their mosaic-ness less so) and towards the work itself.

* See Part II of this series for further discussion of how mainstream artists use mosaic techniques and effects in their work.