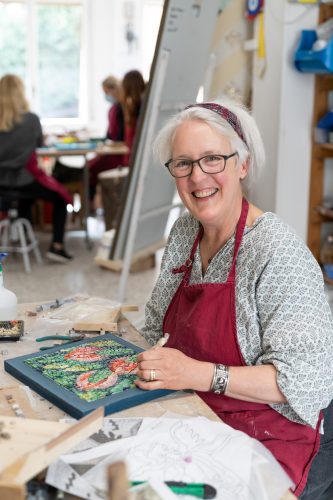 Helen Miles trained in the art of mosaic making with master crafts people in Greece who taught using traditional methods with a focus on Byzantine iconography. She later became interested in Roman mosaics and now makes contemporary pieces for interior and exterior spaces.

Born in Glasgow, Helen worked in America and the Middle East before moving to Thessaloniki in Greece in 2003, a UNESCO city famous for its concentration of Byzantine churches. It was while living there that she began to study mosaics which later led to a full-time profession as a mosaic artist. 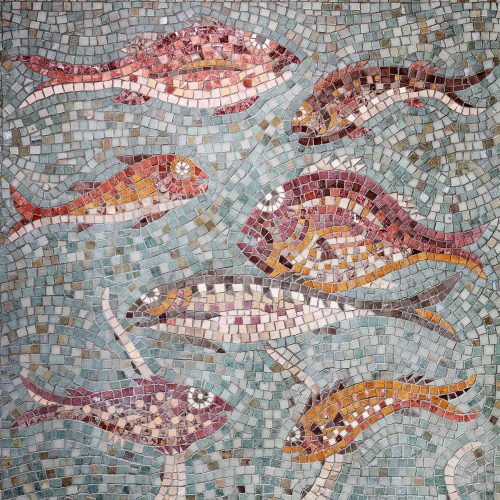 Helen is now based at Out of the Blue Abbeymount Studios in Edinburgh. She mainly uses Winckelmans unglazed porcelain and vitreous glass tiles for her commissions but also loves to experiment with found and foraged materials including stone, single use plastics and hardware. Her aim is to preserve the simplicity and directness of early mosaics while producing works which suit the way we live now.

‘I have always loved things which are made by the slow and deliberate accumulation of parts whether the dry-stone walls of the North or a sentence that contains all that needs to be said. The result seems casual, organic and simple but the process is usually long and far from effortless. So it is with mosaics,’ says Helen. 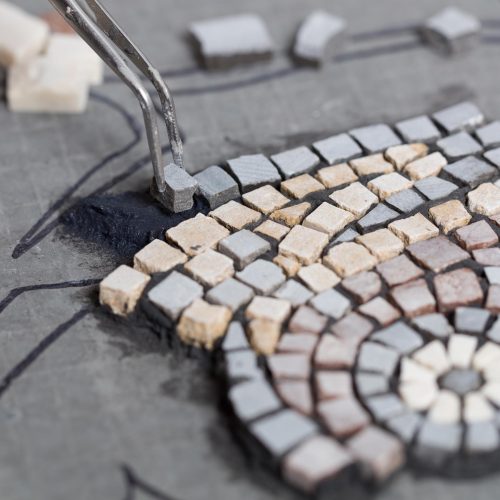 Each mosaic takes many hours to make – the individual pieces are cut to size and then put in place one by one, often using tweezers. The materials used in each piece varies according to the design but all of Helen’s mosaics are suitable for indoor use and can be adapted for an outdoor position. If a larger mosaic is needed, then the mosaic can be cut into sections to facilitate the transport process and then assembled and grouted on site. 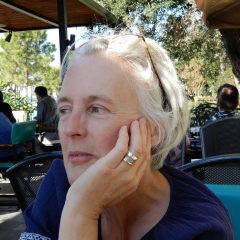 For more information about Helen Miles and her work, please go to the Commission and Browse pages.