I have been having a go at making direct method mosaics onto wood, using cement based adhesive as opposed to glue. The idea is that I want to recreate (at least a fraction of) the higgledy piggledy immediacy of many of my favourite Roman/early Byzantine mosaics. Looking at them, one can almost sense their original makers crouching over their work, one on one side, one on the other, pushing tesserae after tesserae into the soft substrate. As I imagine them, the Roman craftsmen work fast, with the sun beating down, sometimes choosing stones that fit perfectly, other times cramming them in a little too closely. They run out of a certain hue, call to their assistants to fetch more,  get up to stretch their legs and then resume their labour at a slightly different angle. I am constantly drawn to these early masterpieces because of the real sense of many hands at work and because of their entirely human imperfections. The more technically exact works, like many of the famous mosaics from Pompeii, leave me totally unmoved.

My own attempt to be more higgledly piggledy  is prompted by the fact that I was taught how to make mosaics by Greek mastercraftsmen who were themselves heavily influenced by church decoration and iconography. Their work  had the precision of necessity: one wouldn’t want a saint’s nose to be out of joint or a dragon’s snarl to be translated into a wry grin by a piece of smalti gone awry. I am trying to rid myself of this over exactitude and regain a bit of spontaneity. I’m just playing around, and enjoying it.

Here is a detail of a mosaic in the Palazzo Massimo Museum of Rome which I love. You can see the higgledly piggledyness that I am talking about in the background andamenti around the bird: 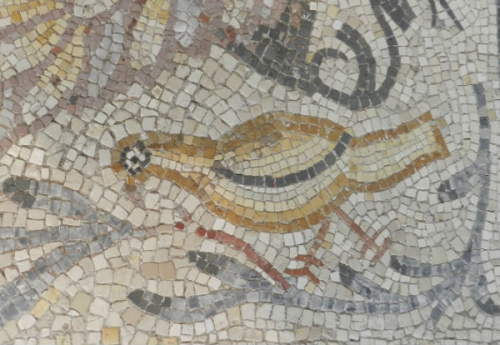 And here is a detail of an ungrouted leaf mosaic I have just finished, not quite the same thing, but I’m trying: 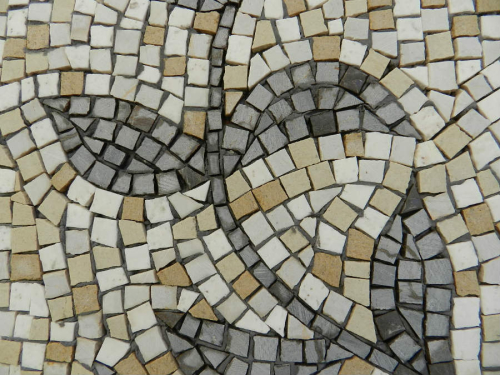