You know what it’s like. I know you know. That moment when you open the oven and find your lovingly prepared cake has failed to rise, peer into the washing machine to discover the white wash has turned an alarming shade of pink, or herd a bunch of fractious children up a hill in the sizzling heat with the promise of an ice cream at the end, only to find you’ve left your wallet in the car. Well, I am sure you also know that mosaic making has it’s own such moments. Except they are not really moments. They are long wasted hours when you look back and think: darn, drat and bother it (to put it politely). So it was when I had a go at making a mosaic face.

I know I’ve told you that my thang is ancient mosaics but, hey, lets say it all over again. I cant get enough of them in all shapes and forms from vast basilica floors to little fragments behind museum glass, but I have a particular fascination for ancient mosaic faces. One reason I like  them is that sometimes they are a bit wonky which is charming and gratifying at the same time. But for all the wonky faces, like the one above, there are others which are stunning in their precision and authenticity. This melancholy woman from Pompeii is a case in point. 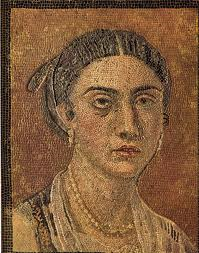 Most ancient mosaic faces don’t try to convey individual likenesses. There are Gods and gladiators, personifications of the seasons and stylised actors but very few real people.

Yet you do also come across ones which are hauntingly lifelike:

And the more you look at them, the more you want to look again and the more those chin swirls, upper lip tugs, and gentle under-eye brushings, make you linger. So, given my penchant for ancient mosaic faces, it seemed the logical next step to have a go at one myself. Now I don’t want you thinking that I was trying to emulate the work of the long dead masters. For one thing,  I don’t lay claim to have their talents and for another I wanted to do something a little bit different.

A straight forward copy would have been easy enough but my aim was to make a portrait which was not a portrait. With a carefully placed piece of stone here and there, I wanted somehow to capture (or hint at) the person behind the mosaic, in other words to create a face like the one at the top of this post, something Roman-like in its eschewal of actual portraiture, yet still held something of the individual I was ‘drawing.’

Making my own ‘ancient’ mosaic face

So I set to work. Here is my model:

My husband on a fishing trip in Scotland enjoying a cigar and playing with his mobile phone. And here is the mosaic:

You see what I mean about the darn, drat and bother it feeling? For one thing,  it’s not the non-portrait portrait I was aiming for. You look at it and, if you know him, you immediately think ‘David’. Despite my best efforts I ended up with just a crude caricature with a bouffant hair cut and creepy eye make up. There are people out there producing stunning mosaic likenesses:

They are technically perfect and I admire them for it but it wasn’t my intention. I knew right from the start that it would be difficult so I laid the tesserae first on paper using water soluble glue which meant I could fiddle around with different colour combinations:

And then when I was happy with it (what was I thinking of?) I transposed the face to the base board:

You win some, you lose some and you learn some. The best thing I learnt with this mosaic is to avoid likenesses like the plague and, more importantly, how to do a three strand guilloche border pattern although even that I cant claim credit for. The master of Roman geometric patterns, Lawrence Payne of Roman Mosaic Workshops, has posted a fantastically  easy to follow video (along with many other, equally useful, videos) on Youtube which I followed diligently and the border was probably the easiest, quickest most straightforward bit of mosaicking I’ve ever done.  Thank you, Lawrence!

But disappointment hasn’t entirely chastened me. The last few days have been spent working on a design for my niece’s wedding in September which involves full length figures of the bride and groom…Meanwhile, let’s go back to the ancient masters of stone faces:

And some modern beauties too: