I’ve been thinking a lot about andamento recently, about the lines of tesserae from which all, or almost all, mosaic creativity springs. Straight lines, curved ones, long drawn out tapering ones, lines which twist and writhe, ones laid for emphasis, others to distract attention. Without lines a mosaic is not a mosaic, just a random collection of parts; a field of poppies, pebbles on the shore. The lines are the mosaic artists’ brush strokes; a single tessera is a dot but a line of tesserae has the potential to be infinitely expressive, along with countless other kinds of non-mosaic mark making.

Everything I know about andamento in the line making sense of the word can be traced to Rachel Sager of The Ruins Project, and Anabella Wewer, both Pennsylvania based mosaicists whose thoughtful and hugely informative courses on this subject are available through Mosaic Arts Online.

For clarity’s sake, it should also be pointed out that the word andamento refers to the classical styles of laying tesserae in the background of a mosaic, in other words in the non-figurative part of the work. There are a number of clearly defined approaches to how this is done whether it be in straight lines, fan shaped repeat patterns or in radiating waves. I have written about this elsewhere but here I want to write about the andamento within the main form of a mosaic, and more specifically about andamento in mosaic faces.

Exploring the use of andamento in mosaic faces

Why andamento in mosaic faces when andamento is everywhere? Because all humanity can be found in these faces; tenderness, silliness, pomposity, gentleness, joy, curiosity, yearning, sadness, awkwardness, serenity and…..and because I just want to stop (again) and really look at them and make you look too. Mosaic faces can be extremely simple (consisting of nothing more than a few strategically placed tesserae), but they are usually deceptively complex and by necessity contain a great deal of considered and careful andamento. After all, an infinitesimal difference in placement will change a delicate line under an eye into an extreme case of facial palsy, turn a knowing smile into a sinister grimace or make the most bewitching of glances look cross-eyed.

Although most of my photos are of ancient mosaic faces (my photo library is still dominated by all those years in Greece), the styles and techniques for making mosaic faces have scarcely changed down the centuries.

In both examples above (one dating from the 3rd century AD and belonging to a fragment from Sparta, Greece, the second pair made as samples in the 21st century for the Hackney Mosaic Project’s Shepherdess Walk mosaics) the facial features are distinguished by darker tesserae – the mouth, the eye brows, the upper eye lid and the nose (in the case of the contemporary mosaics). The shape of the face and the shadowing  are suggested by mid tones and the nose, cheeks, brow and chin are picked out in lighter shades.

Perhaps the simplest way to get a sense of the shading and tones of a face that you were planning to render in mosaic is to take a colour photograph of an actual face or a mosaic one and convert it into grey tones. This helps draw your attention to the differences between mosaic and other artistic mediums. A drawn or painted face would not as a general rule (assuming that there are such things as general rules) use such strong tonal differences to accentuate the nose, eye brows etc. But in mosaic it goes without saying that the features could very easily merge into each other without clear defining lines. 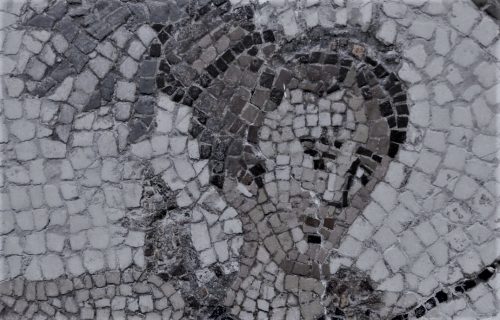 However, the tones and contrasts are the least of your problems, it’s the andamento in mosaic faces that is the tricky part. A human face has 43 different muscles all of which do different things according to different expressions and facial movements. Unless you are aiming for verisimilitude and are using minute tesserae which allow you the flexibility to achieve a near-painterly effect in your mosaics (if so, why not paint instead?) then these subtleties need to be distilled without making the face seem rigid. 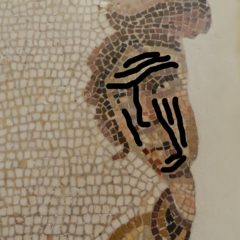 I pored through dozens of photographs, experimented at drawing the andamento over them to indicate the direction of the lines, went away and did other things and returned  convinced the exercise is fruitless.

The golden rule of mosaic making, the one simple, unbreakable rule which applies to mosaics throughout the ages, is that each tessera is defined by the tesserae that proceed it and the ones that come after it. Tiny differences in size and spacing, differences so small that they are effectively invisible to the naked eye, mean that constant adjustments are made as you lay your pieces.You might have supposed that you’d be able to define the angle of the nose in one line, for example, leaving space for two parallel lines to indicate the shading. However, as you lay, you realise that two additional lines would make the nose seem too cramped, drawing attention to a particular feature when you want the viewer’s eye to fall evenly on the face. So you adjust your plan, moving the pieces to adapt to the space you have and the expression you want to create. It’s a constant juggle, sometimes feeling as if you have six balls all in the air at once, and they keep falling out of reach until, at last, the final piece finds its place and the balls fall, silently, smoothly, into your outstretched hands.

In summary, there are no rules here, but here are my tips:

Meanwhile, here is my collection of mosaic faces to inspire you. Forgive me for not labelling them all but if you need to know the source, please don’t hesitate to ask.