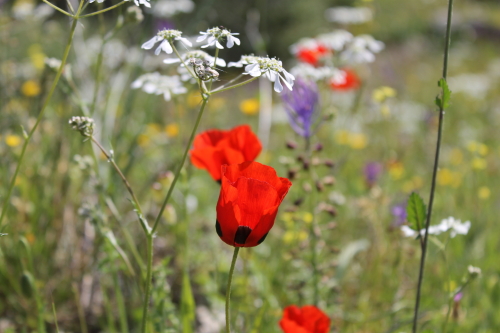 The idiot being me.

Designing mosaics has never come easily to me. I toil and sweat over them and even when I have come up with designs that I am reasonably happy with (or at least can tolerate), there has always been at the back of my mind a sense that something was missing, that it didn’t have to be such a pained, angst ridden, protracted process. At various times, I attributed this to a simple inability to trust my instincts, to a natural proclivity to harsh self criticism or to the fact that I didn’t attend art school or receive any formal artistic training. 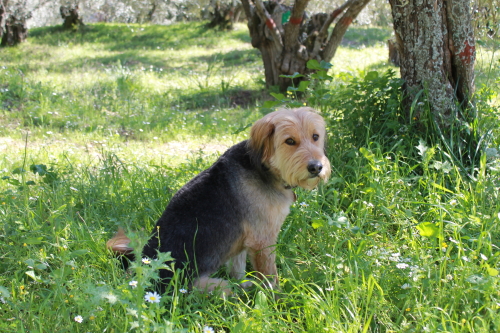 I would design something, tear it up, rub it out, start again and again and again and then finally come up with a drawing to scale which I’d hang on the wall and allow myself to come upon it at different times of day or in different moods and lights to see if I still liked it after stepping back from it, all the time wondering why I found it so darned difficult.

Having just finished one of the my most agonising mosaic design processes to date, I went away for Easter week to Pelion equipped with a new camera and a determination to learn how to take better photographs. I downloaded a Kindle book called (optimistically) How to Create Stunning Digital Photography by Tony Northrup and settled down to immerse myself in f-stops and shutter speeds. Designing mosaics was, for once, the last thing on my mind. 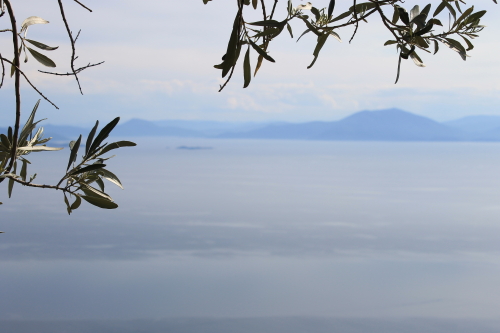 And then it hit me. There I was, on a Greek mountain side happily snapping pictures of the dog and wild flowers, and thinking of all the wonderful photographs of mosaics I’d be able to take once I mastered depth of field and the principles of white balance, when I realised that the design elements of a good photograph are no different from the design elements of a mosaic or a Renaissance masterpiece. There are some simple rules which you need to know about if you want to understand harmony and how the eye responds to an image. I haven’t tried out my new photographic principles on my mosaic designs yet, but I am quite convinced that they will turn a rather chaotic and often gruesome experience into one which will, at very least, has some sort of order and structure. Rules, of course, are there to be followed, loosely played with or down right ignored, but whatever you end up doing,  it helps to have them there.

Designing mosaics – the new way (with thanks to Tony Northrup)

These are some of the photography rules which seem to apply equally well to mosaic design.

1. The Rule of Thirds. Apparently, this one has been around since the time of the ancient Greeks so it’s a tad embarrassing that I had never heard of it. The basic idea (vastly oversimplified) is not to centre your subject, but to move the main focus of the design at least one third of the way towards the edge.

Look at this work by Adam Stanley – the dominant design feature of the piece are the ferns in the front, left third which are balanced, in turn, by the two geckos. 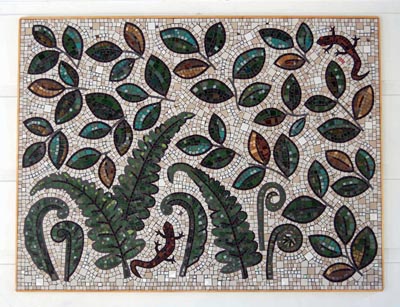 2. Give your subject room for movement. I have waxed lyrical on the subject of the mosaics at the Great Palace Mosaic Museum, Istanbul which are marvellous in many ways and also beautifully illustrate this point. There is a huge amount happening in the mosaics from gory animal fights to scenes of domestic life, but they are never crowded and the individual features are each allotted plenty of space and room to move so that they don’t impinge on adjoining features. 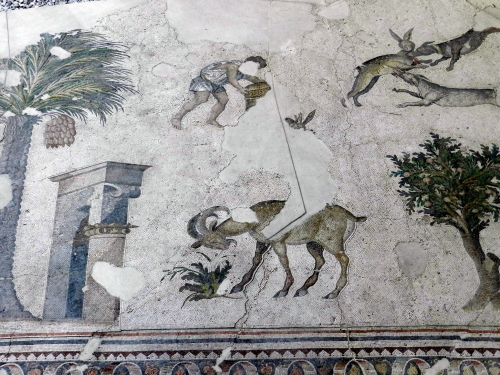 3. Your eyes are naturally drawn to lines so if you use lines in a design you want to make sure that they are adding to the overall visual harmony of a piece rather than distracting from it. In photography, this might mean the lines of a building, a tree or a horizon. I have been working on a modern version of this ancient mosaic of Jersualem which might explain why I was finding it so difficult. There are lines everywhere. 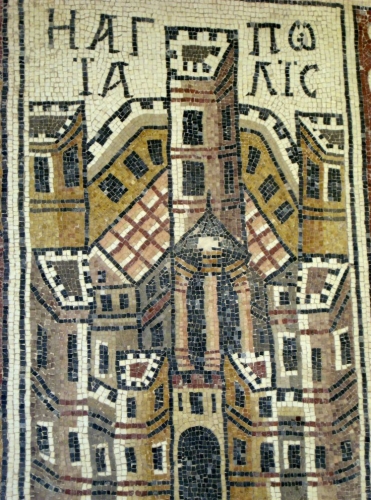 This principle is obviously a bit more complicated in mosaics which essentially are composed of nothing but lines, certainly in the andamento, or laying of the background tesserae. There are all kinds of ways of dealing with the inherently fragmented line-y-ness of mosaics without being jarring to the eye. One of the my favourites is the work of Christina Nakou, who in this piece lets the main design elements (the birds) draw the eye away from the andamento while using the andamento (it’s random, staccato lines) to reinforce the mood and movement of the hopping, chirping birds:

The subject of andamento could fill a whole blog post in itself so I wont go on about it, but you get the idea.

4. Pay attention to balance and visual weight which, in a mosaic, would be determined by:

There’s plenty more to say on the subject of designing mosaics but I feel I’ve said enough for today’s idiots guide. Even if I end up never using my newly discovered photographer’s techniques and the process of mosaic designing remains as tortured as ever, I will at least have had fun with my camera in the olive groves. 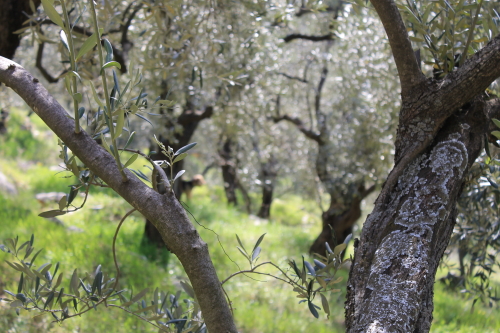 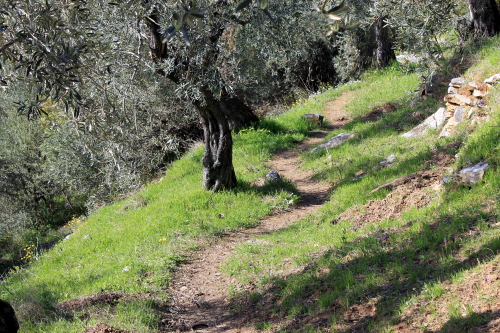