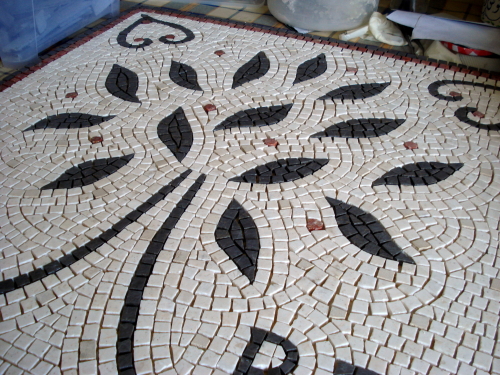 How many tesserae does it take?

There we all were sitting around a day or two before the wedding chatting about this and that. We might have been doing our toes at that particular juncture or pouring out another bottle of wine as we happily anticipated the Scottish-Palestinian wedding on a Greek island. When the subject of presents came up I went to get the wedding mosaic and the company (bless them) made suitably appreciative comments. Then the conversation drifted to other things and the mosaic sat there amongst us, until one friend, leaning back in his chair, said: ‘Two thousand five hundred.’

A simple enough comment, but it took me aback. What a lot! I’d never thought of the mosaic making process in terms of numbers. I know making mosaics is slow work and I sit there hour after hour, day after day, often feeling that I haven’t progressed at all, but two thousand five hundred. Golly.

So if there are approximately that many pieces, then it means that in order to make the wedding mosaic I probably cut the stones at least 5,000 times. Yet despite the seemingly endless cutting of the rods into smaller, more manageable pieces, then cutting them again to fit their precise locations,  the hours passed like minutes and the days sped by and the work was light and effortless.

I saw an online discussion recently in which someone asked fellow mosaic makers whether they work on more than one mosaic at a time and I was surprised by the question as it has never occurred to me to do such a thing. When I am making a mosaic I am so utterly absorbed in it, that I only tear myself away reluctantly. I don’t answer the phone. I leave my tea to go cold. I am resentful and churlish about interruptions and intrusions and the idea of being able to divide that level of concentration between two (or more) mosaics simultaneously seems quite impossible.

So if each medium sized mosaic (this one is 60cm by 60cm) potentially involves thousands of tesserae and each of them have to be individually cut to size, why don’t I go crazy with boredom? For an outsider looking in, the mosaic making process would appear to be the most repetitious and mind numbing of activities. But in fact I find it quite the opposite. If I don’t make mosaics for one reason or another (usually summer travels) I get irritable and tetchy. I need mosaics and the intense concentration they require to keep me calm and content.

My absorption could indicate a simple mindedness which I don’t care to admit to, but I think it is more likely to have something to do with the precision applied to laying the stones. I am a stickler for precision. I know it’s a fault arising from having learnt mosaic making with master craftsmen here in Greece who specialised in fiddly Byzantine-style icons using pin-head sized tesserae but it’s a fault I cant seem to shake off. Each piece must be harmonious with its neighbour or I will find myself awake and fretting at 2am.

This wedding mosaic required more than usual concentration because I wanted the flow of the tesserae to be the design. Moreover, the spaces between the leaves were often tricky and I had to make sure that there were no disruptions to the eye. Here are some examples of  filling in:

I also spice things up the mosaic making process by experimenting as I go. Half way through this particular mosaic, I struck upon the idea of using a different coloured grout on the tree to highlight it’s shape and make it stand out from the background. The idea of using only three colours of stone and to let the tree be the same colour as the background was a experiment in itself and I suppose I wanted to be completely sure that the experiment didn’t backfire. I would defy anyone to enjoy grouting – the concept of dolloping a pile of blackish sludge on your precious handiwork is bad enough, but the reality is worse. As I painstakingly subdivided the finished mosaic and grouted them separately, I thought perhaps that this was one experimentation too far.

Then, when you pick up the sponge, and clean off the grout, there’s the moment of…well, what would you call it? Sometimes satisfaction, sometimes not. Sometimes downright horror and self loathing. I used to cast my mosaics in concrete using the indirect method because that was how I was trained and when the time came to remove the upper layer, one would never really know what would be underneath. With direct method ones of course, the moment of revelation is not such a mystery but still my reactions to the finished piece are unpredictable. Often I grow to like them but there have been ones in the past that I cant bear to be in same room with. But this one I liked from the beginning and I still do. 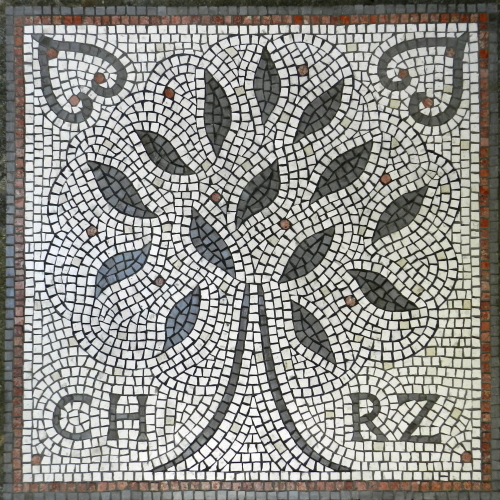 And since this is about a wedding mosaic, I cant resist throwing in a wedding photo. That’s me on the left with the green hat with my dear old friend, Susanna.