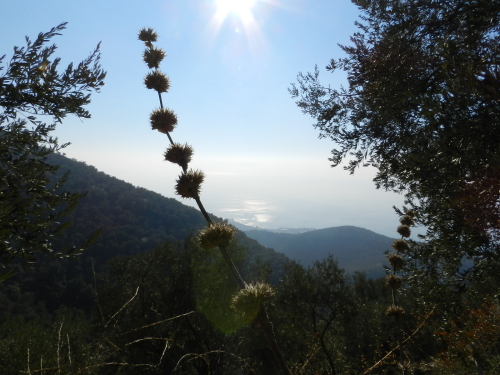 Once upon a time we bought a house in Pelion, Greece. It was a simple house on a hill overlooking the sea. So simple that it had been on the estate agent’s list for years. No one wanted it. The agent’s photo showed only a drab concrete wall and an unappealing add-on room. There was a mention in passing of a view, but Pelion is a mountain peninsular surrounded by water so saying a house has a view is almost like saying it has running water. 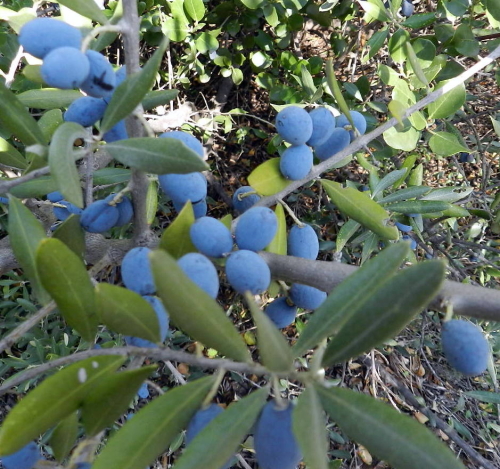 But one day, expecting nothing,  I went to see the house, climbed over the almond tree which had fallen over the entrance way, slithered down the bank to the front of the building (when I say mountain, I mean mountain – this house was settled comfortably into a steep slope like a head supported in the crook of an arm), and it was as if someone had punched me. I wasn’t quite standing on a precipice, merely on a continuation of the steep bank, but it was the same sensation you get when you climb in soft drizzle, doggedly following a path, head down, seeing only a few hundred yards in any one direction and then, when you finally get to the top, the clouds lift…. That lurching, exhilarating sensation of being deafened by beauty. 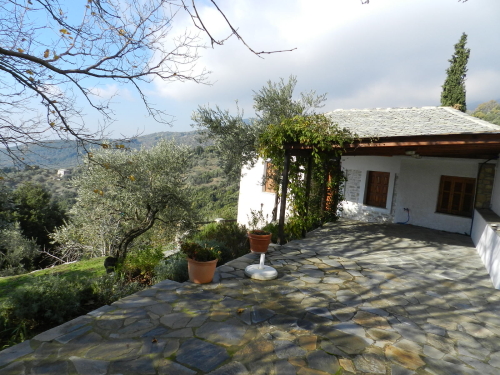 Needless to say, we bought the house. The bank I slid down became steps to the lower level, the concrete wall was plastered and painted, the bare approach was paved and covered, the fallen almond was replaced with a sturdy sapling. We used the house on weekends and during the holidays and I planted anemones in the long grass and pomegranate, cherry and hibiscus trees on the terraces. A young vine and wisteria curled their way up the new pergola and every time I went, I had that same sensation. You couldn’t escape it, like having a world class symphony orchestra hidden behind the unappealing add-on. Brushing your teeth, doing the washing up, or putting the children to bed, there it was – that astonishing, heart-stopping view. 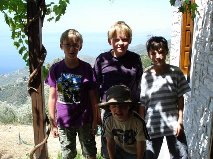 I made one of my first ever mosaics for it – of two birds based on a mosaic from Larissa, Greece – and took it to the builders to insert into the wall above what were once the animal’s quarters on the lower level. That’s all there was in terms of mosaic decoration and I don’t even have a photograph of it.

Not that the house was perfect. The fact that it was built into the hill meant there was always some sort of problem with damp. The configuration of the rooms was odd and would have been odder as the boys got bigger. And the only way to get to the house was to park your car at the top of the hill and carry everything to the door down the steep slope, which was fine on arrival, but not so fine in 35 degrees lugging heavy cases back up after a longer stay.

Then one day we decided to sell it (don’t ask me why) and, as soon as the decision was made, I realised it was a terrible mistake and so within weeks, we’d bought another house over a ridge and down a bit from the first house. The second house did not make my heart stop but by this time I had grown fond of the hill and the neighbours and it wasn’t only the view I couldn’t bear to leave, so we bought the second house from the owner who was born in it and once again set to work to do it up. No need this time to plant a vine as there was already a grand, old, gnarled one leaning nonchalantly against an outside room. 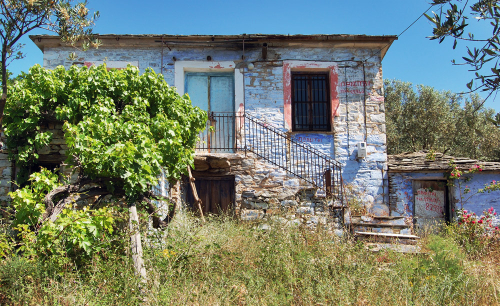 Still in mourning for the first house, I had no interest in making a special mosaic for the new house and gave the builders a mosaic that I happened to have lying around – an indirect piece based on a Coptic textile from the Benaki Museum, Athens, with a heart-shaped pebble in the middle which they incorporated into the threshold paving: 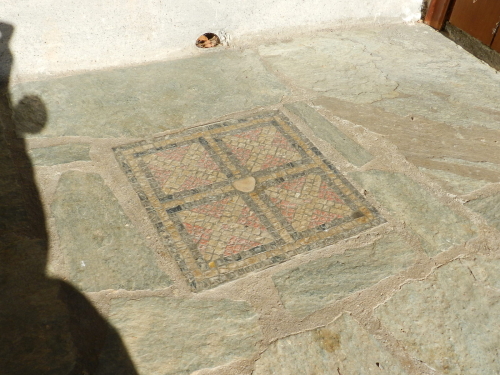 I also gave them an old mosaic which had broken across the middle during a move and so they put it around the side of the house where it cant be seen: 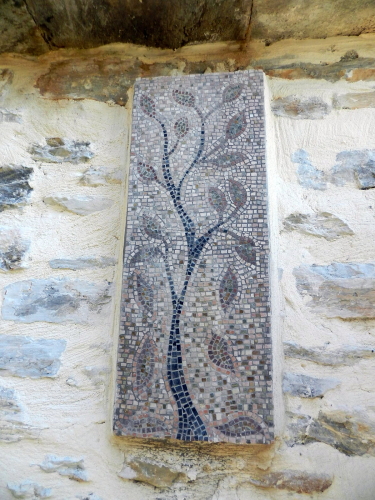 Then, slowly, I grew attached to this second-choice house with its drooping electric cable stretched carelessly across the view. The venerable vine survived the building work and climbed quickly and obligingly over the wooden trellising, dropping fat bunches of grapes over the table where we eat. A red rose which was still blooming next to the outdoor kitchen twenty years after the house was abandoned, accepted relocation gracefully and continues to bloom. The house, in the middle of an olive grove, was difficult to fence so we only planted things which can withstand being nibbled by the herds of goats and untethered horses that wander across the terrace, but oleander, aloe vera and African daisies grow thick and strong.

Eventually and no longer grudgingly,  I made a mosaic on mesh for the window indent in the bathroom: 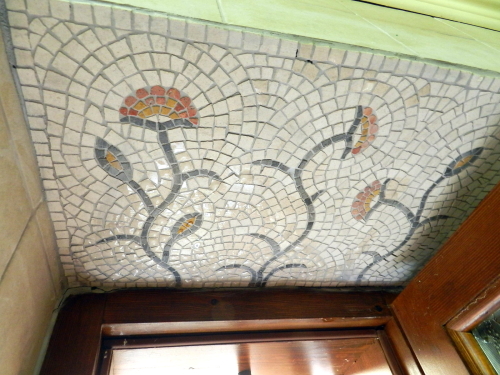 Then last summer I covered a garden pot with broken shards from once loved pots to house a bougainvillea which, despite a harsh, dry summer and weeks of neglect, has somehow survived. 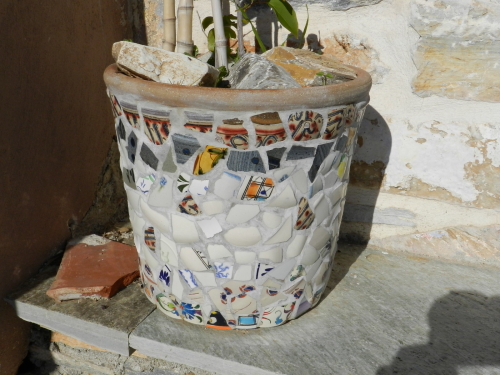 Not very lovely (the grout should be darker, I haven’t bothered to paint the rim) but the shards include a bowl I bought in Fayoum, Egypt; a plate from the Iranian market in Bahrain, a jug made by a Thessaloniki potter and received as a present from a university friend, and a Turkish dish from a shop in Cappadocia whose proprietor freely gave me his cast-offs.

Which brings me to my first real mosaic project for the Blue House – a Gaudi-esque covering for this horrid column: 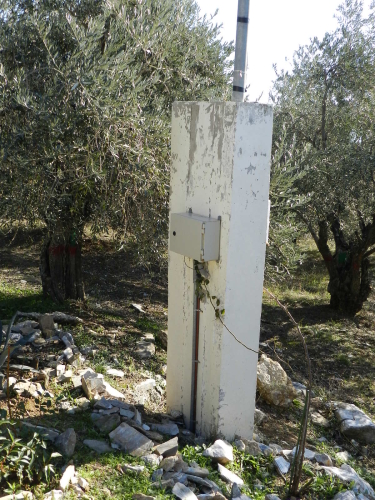 Under Greek law, you are obliged to have a structure of some sort on the edge of your land to connect the mains electricity to the house. It would be nice to have it tidied away in a cupboard or to have something inoffensively and unobtrusively clad in stone, but somehow we ended up with this ugly column which has only taken three years to look woefully bedraggled and down at heel. 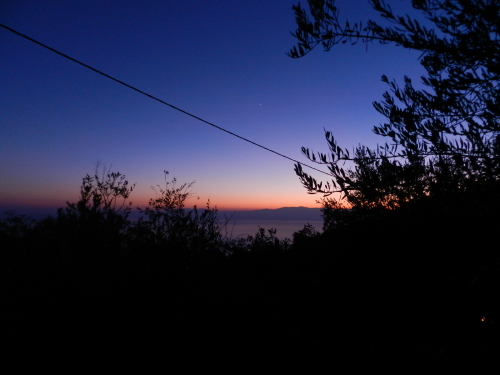 I will ask all my friends and friends of friends to donate their broken crockery and slowly it will be transformed. I cant guarantee it will be a success. It might, like the wire across the horizon, just be something I get used to, but it will be a sign that after all these years, the house which I didn’t even like, has become a house I have become uncommonly fond of. 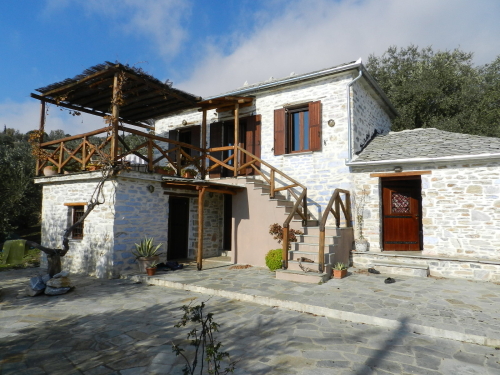