I know why Hades chose a pomegranate to tempt Persephone. You’re stuck down there in the underworld, in those vaulted, sunless spaces and you’ve got to find something that she won’t be able to resist, something that conjures up all the light and energy that she’s pining for. It’s the perfect fruit. The blushing skin, those bright, too-red seeds, so small, so beguilingly small that surely it wouldn’t matter to just have one, or two. No one would notice. Why would they care?

Just as it’s not surprising that Hades chose a pomegranate to trick his victim, nor is it unexpected that religions and cultures from China and India to the Middle East, Iran and Turkey have commandeered the pomegranate as a receptacle for all sorts of symbolic meanings. The pomegranate is a casting agent’s dream – it’s rich, luxurious, sexual, and full and has been widely appropriated to signify propserity, marriage and fertility.

Except for the association with Hades (but, after all, Persephone escaped) and for the fact that pomegranate seeds are served as part of a traditional funeral dish in Greece, the odd thing is that their slightly sinister side has been neglected. It doesnt take too great a leap of the imagination to link pomegranates with carnality and death given their deceptively smooth skins hiding the crammed, boudoir upholstered chambers within not to mention the blood-coloured juice, but yet largely they seem to have positive connotations.

It’s the season for pomegranates now in Greece. They hang down over the pavement from neighbourhood gardens so you can reach up on tiptoe and pluck them from the trees. The market stalls are full of them and walking in the hills, you come across wild ones, smaller than their cultivated cousins, each ball suspended as if held by an invisible thumb and first finger, carrying their weight inplausibly lightly.

A pomegranate is a mosaic before it even starts to be depicted in other ways and pomegranate mosaics abound. I’d even go so far to say that, with the exception of grape vines, they are the most commonly represented fruit in ancient mosaics. I chose a pomegranate as my logo – partly, it must be said, for practical reasons, as it can be neatly and easily scaled down and still remains immediately recognisable, but partly too for it’s associations with Greek myth and for all the significance it carries.

I also made a pomegranate and leaf border for my friend’s wedding mosaic:

One of the most splendid examples of all the ancient pomegranate mosaics must surely be this pomegranate tree, groaning with fruit: from the Heraclea Lyncestis basilica mosaic in Macedonia:

It’s interesting how often pomegranates are depicted with animals. Here’s one from the Church of the Apostles, Madaba, Jordan, with parrots:

Pomegranates with a cow from the Bardo Museum, Tunis:

And this with a horse (again) comes from Umm El Rasas, Jordan:

Some mosaics show just the fruit. I am very fond of these two at Stobi in Macedonia:

And this little stripey one stuffed into a spare space on the Heraclea Lyncestis border:

Pomegranate decorations are still exchanged as symbols of good luck and promise for the New Year in this part of the world and I like to think of the unbroken connection with the ancients who must surely have chosen these designs for their floors for similar reasons:

It is not that pomegranates (and grapes) have an exclusive prominence in ancient mosaics – plenty of other fruits are depicted too especially apples, pears and figs but pomegranates do turn up with notable frequency. This one from Tunisia contains a pomegranate and grapes:

And this pomegranate mosaic very intrigingly also features a pineapple as written about by www.eyesofrome.com: 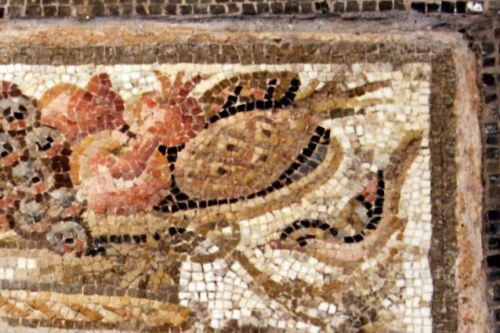 Here’s one in black and white from the Animal Room at the Vatican Museum in Rome: 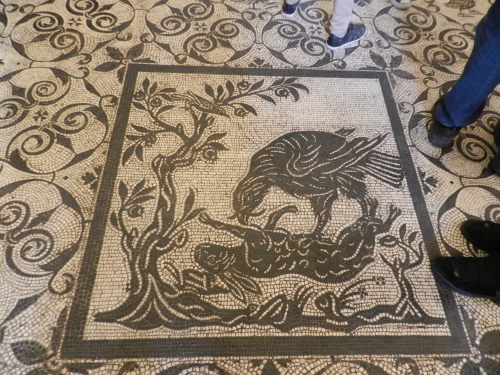 And a self effacing little motif next to a pair of sandals at a basilica in Cyprus:

Of all the pomegranate mosaics I have seen, these from Israel with their delicate colouring and careful shading nestling in a dense background of foliage and flowers are particularly finely done:

And there is also this fire-damaged pomegranate mosaic tree from Caesarea in Israel:

And of course other contemporary mosaic artists have also used the pomegranate in their works. Frederic Lecut of Mosaic Blues reworked a 13th century Persian manuscript painting of a pomegranate for his gorgeous glass work at the top of this page and it’s equally possible to use the pomegranate as a simple splash of colour and interest as Irina Chanry of IC Mosaics does below:

‘My’ pomegranate is also a modern reworking of an ancient theme, taking the tree and exchanging the horse/dog/leopard with two hares  (another symbol of rebirth and sensuality):

And since we’re on the pomegranate theme, here’s a life changing tip: