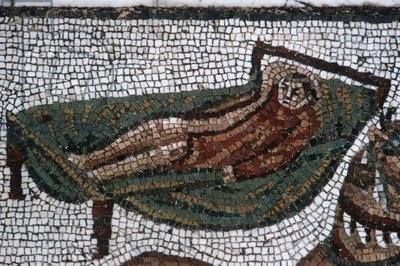 The Romans: sticklers for conformity

When it comes to home decor, the Romans were sticklers for conformity. If you amassed a fortune, there were two things you had to do: one, get yourself a sprawling villa in a prime location. Two, call in the mosaic team. But it was de rigueur to keep to the pattern book. From one end of the vast empire to the other, from the drizzling hills of Roman Britain to the sizzling plains of Antioch, the designs and themes of ancient mosaics show striking similarities. The images that appear most often are hunting scenes, depictions of wild animals, of mythological characters, of masked actors and of gladiatorial battles.

There are also plenty of examples of fruits and flowers, marine life, dedicatory plaques and of course the almost ubiquitous  geometrical patterned borders. But if you want a sense of who their owners were, who trod on the newly laid floors, of real people and individual tastes, well, sorry, you’re out of luck.

The theory behind the uniformity of patterns across the empire is that there were a certain number of standard mosaic designs and that travelling craftsmen brought drawings to potential clients who would then choose from a set repertoire. But every now and again a rogue mosaic design somehow slipped through the net, a maverick that doesn’t fit into any of the categories. Maybe, in that particular time and place, the pattern book fell behind the back of the sofa or a newly rich merchant, emboldened by his wealth, decided to go off on a bit of a frolick mosaic-wise and leave his own unique mark on the living room floor. Take this one of a pot of fish sauce from Pompeii:

So here is my choice of weird and wonderful ancient mosaics. Many of the mosaics listed come from my ancient mosaic board on  Pinterest. I have tried to find out where the mosaics come from and who took the photos and where possible I have labelled them accordingly, but some of them were posted without tags or accreditation so I would be delighted to hear from anyone who knows where they come from. Needless to say, I am not an expert on the history and symbolism of Roman mosaics – I just spend an inordinate amount of time looking at them – so I would also be most grateful of any information about the more obscure aspects of these mosaics.

1. MAN IN A HAMMOCK. Who would have thought that 2,000 years ago a mosaic artist would be able to so brilliantly capture that moment when you manage to haul yourself into the hammock by clinging desperately to the sides, only to realise that the phone is ringing and you’ve left it just out of reach?

2. POMPEII PENIS. Or is it from Ostia? Phallic symbols turn up all over the place in Roman art and are a common symbol of good fortune. I can just about cope with phallic wind chimes or oil lamps but it escapes me why anyone would commission a severed organ for their floor. 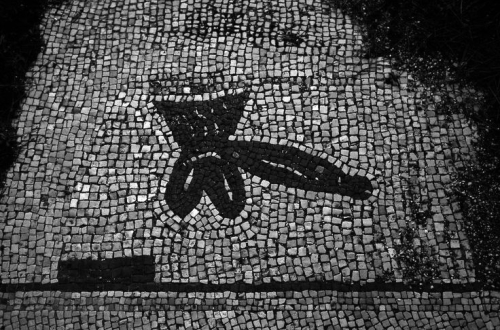 3. PRISONER HAVING HIS FACE EATEN. There’s another, almost identical, mosaic from El Jem, Tunisia so I suspect this is Tunisian too. Continuing on from gruesome themes above, this mosaic also seems a little over the top. There are plenty of examples of mosaicked gladiator fights and some are none too pleasant with blood spurting in all directions, but a close up of a poor soul being mauled by a leopard while being held up as a living shield by another participant strikes me as the mosaic equivalent of Jihadi videos. No thank you. 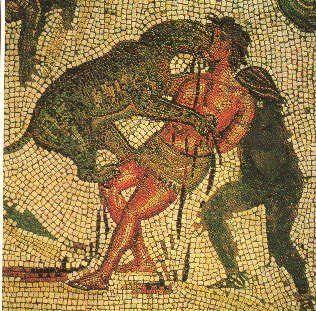 4. THE TIGER SKIN WALL. Walls covered in mosaics are unusual (does anyone know of others?) and I have never come across anything like this. It looks so modern in design and taste that it might have tacked up for a scene in Out of Africa. 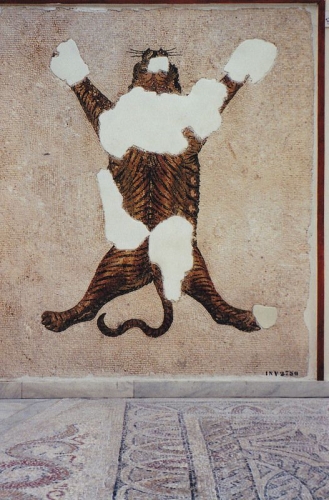 5. THE BIKINI GIRLS. These mosaics of bikini clad women playing sports including ball games and discus throwing from the 4th century Villa Romana del Casale, or Piazza Armerina, in Sicily are justly famous precisely because they are so weirdly wonderful. With their hair-dos and jewellery, etiolated bodies and spindly legs, the girls are unusual both for their sex (real women, except in purely domestic settings, are rare in ancient mosaics) and for their activity. There are plenty of sports people in Roman art but they tend to be men with rippling muscles or wearing gladiatorial garb and oozing machismo. 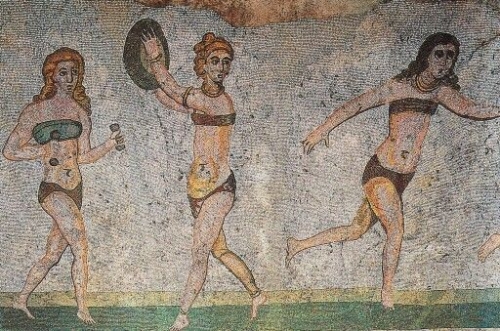 6.THE DRAGON. I love this one. I posted it on Facebook when I found it unlabelled on Pinterest and Lawrence Payne of Roman Mosaic Workshops identified it for me: Mosaic with a ketos (sea monster) found at Kaulonia Southern Italy in the Casa del Drago, 3rd century BC. Interestingly they’ve dated it based on the fact that lead strips were used in it’s making. The reason I love it is because it looks entirely different from all the other sea monsters and hippocampi which pop up in Roman mosaics. It’s those pointy teeth, cute little turned up nose and dinky spikes that do it for me. 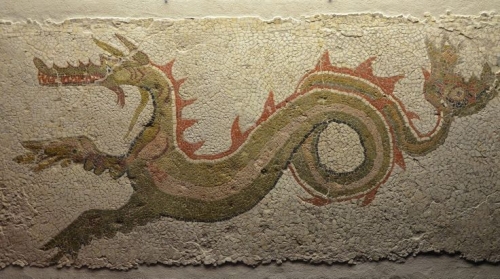 7. THE OLD WOMAN. Barcelona, Spain. The theme itself might not seem so remarkable but actually, as mentioned with reference to the bikini girls above, women don’t tend to appear in Roman mosaics except as goddesses or servants, so this one of a cheerful crone stands out. But does the exaggerated smile actually suggest it’s a mask? 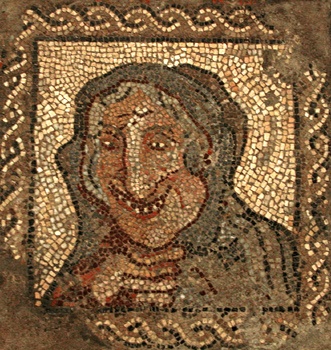 8. BIRD ATTACKING GLADIATOR. Leptis Magna, Libya. That was the label it came with on Pinterest but who knows what’s really going on. A dwarf carrying a cooking pot shield being attacked by a pelican? Yes, but why? 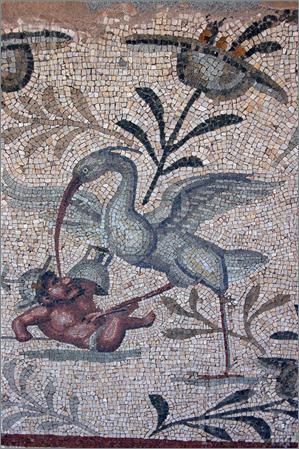 9. ‘KAISY’ MOSAIC. Antakya Archaeological Museum, Hatay, Turkey. Totally baffling. Pan playing his pipes, with a long tail or backward pointing phallus? Behind his back a disembodied eye is being pecked at by a bird on one side and various poisonous creatures on the other – a scorpion, a snake, a centipede (the Mediterranean variety of which is large and nasty). A sword and trident are also sticking out of the oversized eye while two dogs are about to rip it apart and the word Kaisy (the ‘c’ becomes an ‘s’ in translation) written over it. Is the eye a precursive variation of the Mediterranean and Middle Eastern evil eye? Everything about this mosaic is weird. Even the border – look at the bottom right hand corner and you can see that part of the black frame has been deliberately omitted to leave room for the dog’s hind legs. (The museum has another mosaic labelled ‘Kaicy’ of a well endowed naked hunchback – just as bizarre in it’s own way). 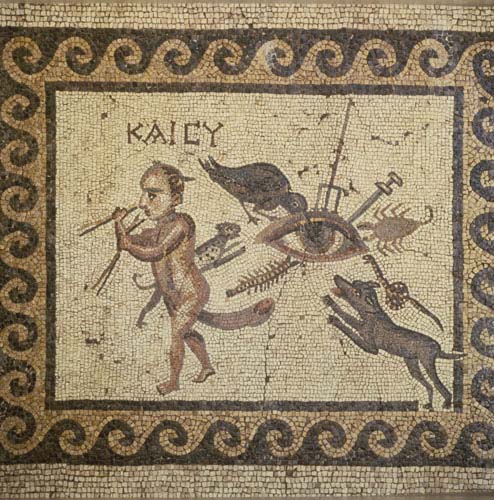 10. THE ACROBAT. Again, no further information came with the photograph but this looks like it might be from Jordan. There are plenty of examples of mosaics of masked actors but this looks to me more like a clown than an acrobat. Riding backwards on his mule with a skin-head cut and kohl-lined eyes, could he be an early version of Goha, the popular comic character in Arab folklore? 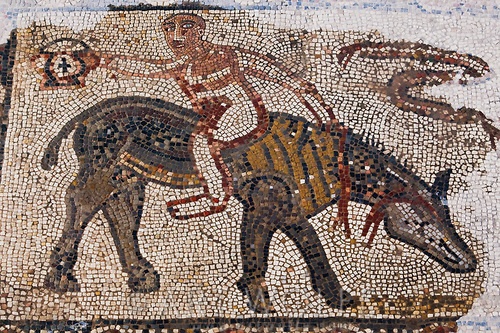