A special occasion is approaching…

There’s a special occasion coming up, so what do you do? Buy your dearest friend a set of cut glass goblets to celebrate his wedding? Wrap up a bottle of perfume to give to your mother on her 70th birthday? Select a stuffed toy when your sibling has her first child? How special does that feel? The goblets will end up at the back of a cupboard, the perfume will be saved for other special occasions (but how many will there be?) and I can guarantee the stuffed toy will be added to the great pile of cute animals already arranged on a high shelf in the child’s room.

But a mosaic…well, mosaics are ideal for special occasions. They are hard to forget or neglect or even to squirrel away in the back of cupboard. They say that the recipient matters  in just about the clearest, plainest, most eloquent language there is. You could hire a plane and write a message in the sky or build a neon sign to flash out your words but the letters will evaporate and the sign will grow rusty and malfunction, whereas as the years roll by a mosaic will quietly carry on saying it’s thing.

It’s something about the unhurriedness (and the unhurriable-ness) with which mosaics are made which makes them perfect for special occasions: for weddings, anniversaries, birthdays and even deaths.  Their cumulative quality, piece by piece, bit by bit, is not unlike the slow accretion of time and love. Not the wild, all-consuming passion of love at first sight but the deep, strong, lasting love which matures and develops as the years pass.

There is something too about the mosaic materials, about setting the occasion in stone, which lends a resonance to their making. A mosaic is for the moment, to mark the particular meaning of a particular occasion, but it also seals the moment and holds it in time – they are both timely and timeless. They are both for us and for those who will come after us, for those who will have long forgotten why the mosaic was made but will understand it’s significance.

Collection of mosaics for special occasions

Here is a small collection of mosaics for special occasions. Five of them made by me, the sixth by the amazing Julie Sperling. I have scoured the internet for other mosaics for special occasions so I could shower you with examples but oddly I can’t seem to find any. Maybe people don’t post them or maybe they just haven’t cottoned on to this particular sub-use of mosaic. But it’s high time they did, so here are six projects to get you thinking or even inspire you to roll up your sleeves and start work or alternatively open your check book and commission one! 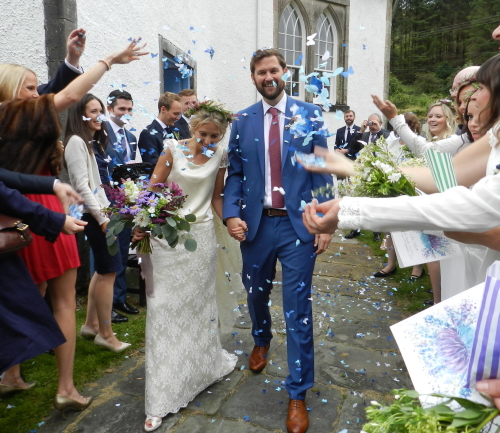 Hellie is my niece and goddaughter. She got married to Matt in September last year. Hellie met Matt at Newcastle University an eon (and a bit) ago. We all wanted Hellie to marry Matt as soon as he appeared on the scene. In fact, we all wanted to marry him. After eight years or so, my mother knitted  him a pair of socks. After that, he had to marry Hellie. Socks means family.

She’s a literary agent in London and he works in sports promotion. I had Grant Wood’s American Gothic painting in mind as well as this detail of two figures (above) from the 5th century floor mosaic of Orpheus from Jerusalem.  I like the folky formality of the figures, the man-woman eternal couple thing, but I replaced the bird and the cross held by the ancient pair with a book for Hellie and a football for Matt. 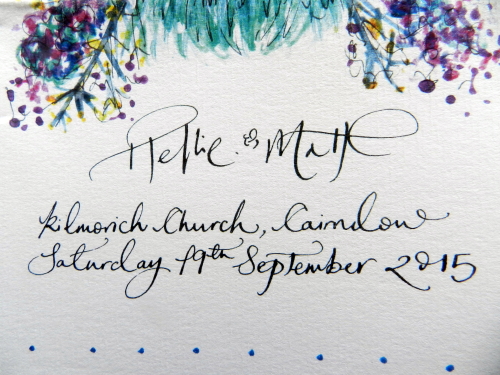 As you can see from the photograph of the planning stage above, I also had an eye on the 4th century Ravenna mosaic of the Good Shepherd from the Domus Dei Tappeti di Pietra. It was the arbour created by the trees on either side of the shepherd that attracted me but in the end I decided to adapt those lovely spikey modernist trees from the 4th century Low Ham mosaic of Dido and Aeneas in Somerset and twine the branches together over the couple’s head.

I was commissioned to make this mosaic last year for a client’s father’s 60th birthday. The design started with a photograph of his garden pond which is his pride and joy and I was asked if I could make a mosaic with the pond as it’s central theme.

A handsome pond indeed. Apparently it has fish in it and note the heron in the background. You know me, Roman mosaics are always buzzing around in the back of my mind but garden ponds didn’t feature much in ancient times so that wasn’t an option. Here are some of my initial sketches:

But the client and her sister were keen on incorporating the heron so I was able to sneak in an ancient Jordanian one and we ended up with the heron standing in the foreground of the pond with the fish swimming about behind it and everyone was happy.

Julie writes so eloquently about the process of making this mosaic to celebrate her dear friends Siti and Fad’s wedding that I urge you to go straight to her website now and read all about it.

But just in case you only have a ten-second attention span (not uncommon these days) here is a selected highlight:

And of course I was going to use rocks, not only because they’re what I love, but because they’re stable and humble, and the more you get to know them, the more they reveal their beauty and their secrets to you. All good qualities in a partner and a marriage, if you ask me.

As a final note, I think an ampersand is quite appropriate for a wedding mosaic. Obviously, it’s fitting in that these two are now Siti and Fad. But I also like the way “and” can hint, with the addition of a simple ellipsis, at the promise of adventures to come (as in “And…”).

I have already written individual blog posts about the following three mosaics so I won’t repeat myself but here they are as part of the collection of mosaics for special occasions: