Inspiration for the Un-swept Floor Mosaic

For a long time I have been wanting to make my own version of the famous ancient un-swept floor mosaic motif. It’s a wonderfully whimsical design of the debris from a Roman feast strewn carelessly over a dining room floor. Animal bones, fruit peel, shells and nuts are among the things that have dropped from the banqueters fingers and remain there still, fixed in stone. My version would use both the remains of these long forgotten feasts and items from a modern life to tell a story. 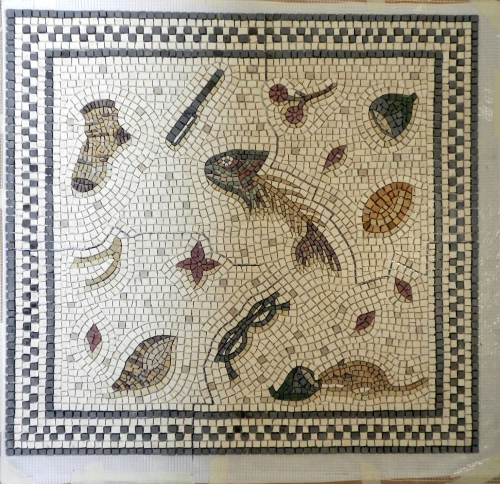 The story is C’s. I met C. during my first week at university. I was at a fresher’s function feeling awkward and uncomfortable. I remember there being wine glasses and crisps involved and stilted conversations with people I wasn’t interested in. And then I saw C. and felt a lurch of recognition which was to prove entirely right.

She was full of energy, fearsomely clever and fearless with it. She didn’t walk, she bounced. She had opinions about politics and life and if she didn’t like something she changed it. The next three years of university life passed together in libraries, tea rooms and pubs. C. and I shared a house in our second year and while I devoted myself equally to my studies and my beautiful half Irish Cob, half Arab horse, she threw herself into more scholarly pursuits and, thirty years later, is an academic at a London university.

So the mosaic, which is to be a kitchen splash back, was to reflect her life: a mother of four children, a teacher and writer about Ireland who has spent most of her working life in London and is most happy in her vegetable garden deep in in the rolling hills of Normandy.

As far as I know, three versions of the ancient Roman design still exist: one from Aquilea, near Trieste:

Another dating from the time of Hadrian from the Aventine Hill in Rome now at the Vatican Museum (pictured top and detail below):

And one at the Chateau de Boudry in Switzerland:

Designing the mosaic – borrowing from the originals. 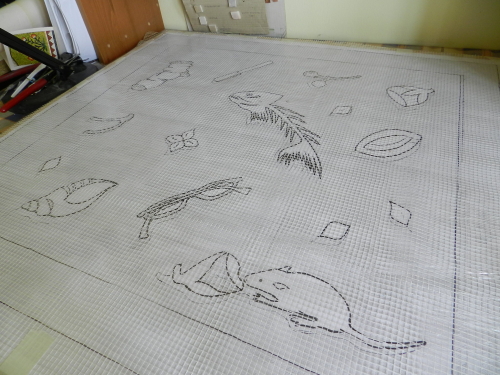 I made the mosaic on mesh in four panels – you can see the division lines in the completed work (near top) – so it will be easy to transport and reassemble.

C. and I agreed that we wanted to include the iconic Vatican mouse but her mouse is eating the end of an aubergine (her favourite vegetable) instead of a walnut: 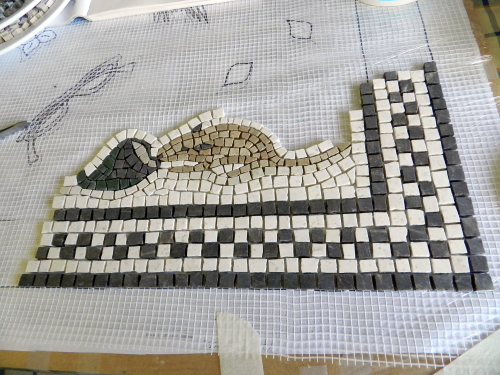 We also liked the fish skeleton from Aquilea so we put that in as a central, balancing part of the design: 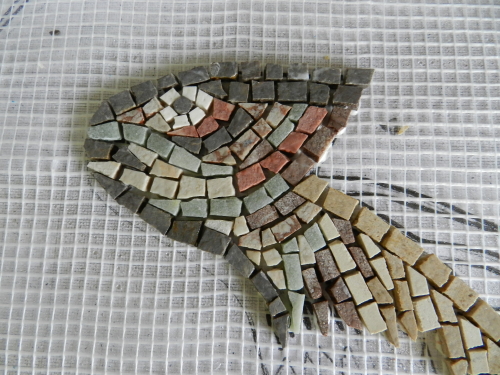 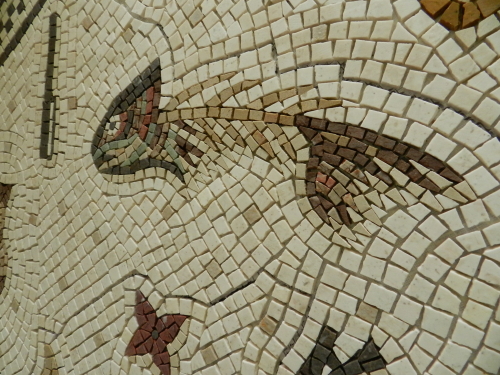 The wish bone (Vatican) was added too as a reference to the fact that life, however much you try to plan it, is a matter of chance: 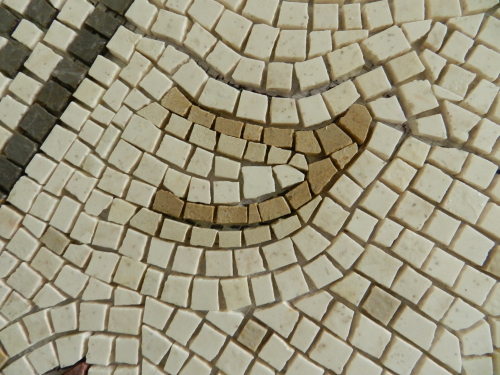 The cherries (Vatican) were put in simply because we liked them: 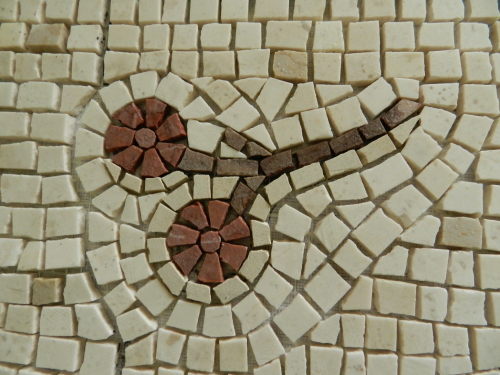 I was keen on an Oyster card to represent her London years and we toyed with the idea of a crumpled up piece of paper to symbolise her writing but C. vetoed the Oyster card and I felt that the crumpled up paper could look an unreadable mess.

So we ended up with a pen – for her writing: 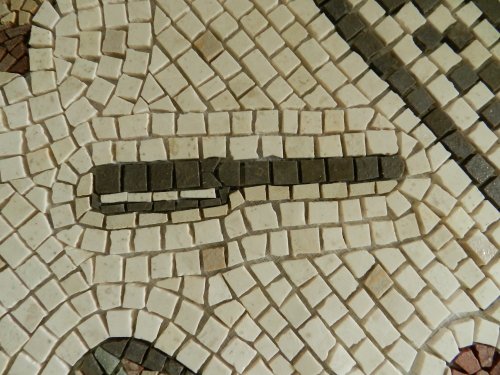 A shell to indicate her travels (a shell, although not this one, is part of the debris of the Vatican floor too): 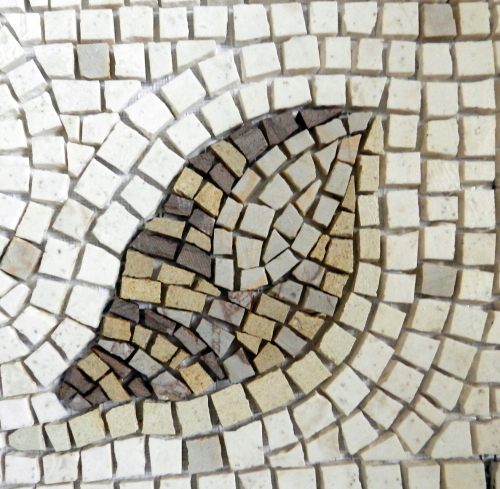 A lemon – for the bitterness of life:

A hydrangea flower and four petals to represent Ireland (where it grows profusely) and her four children (now scattered): 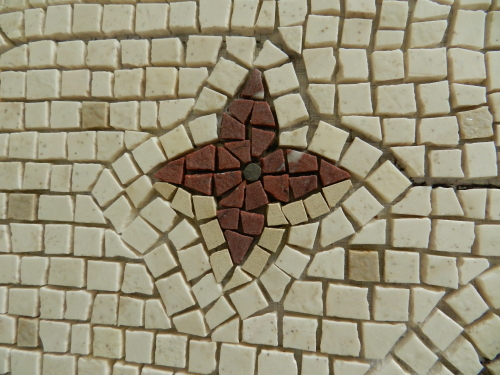 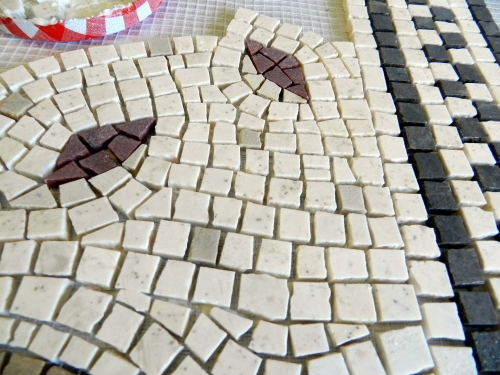 A pair of glasses to indicate the aging process: 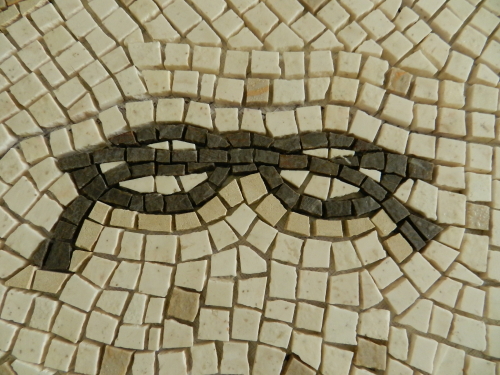 And my favourite:  a discarded sock which I believe was suggested by her teenage son as a reference to her child rearing years: 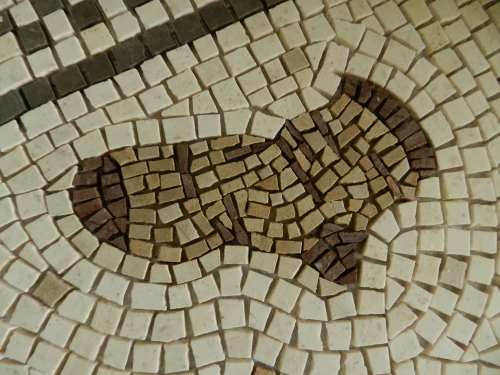 C. was fussy about the sock. An earlier version didn’t pass muster. She wanted a sock that would be fully sock-like, bunched up, not entirely clean and infuriatingly single. Such, as they say, is life.