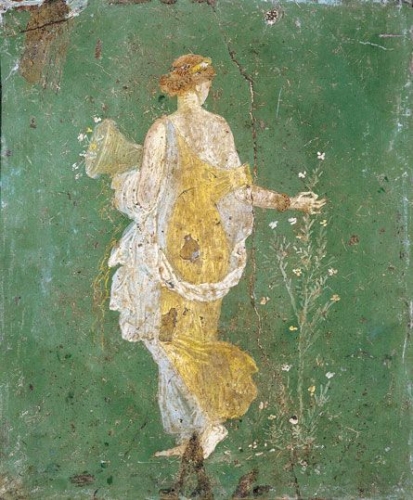 I once had a stroke of inspiration. Once. A dear friend offered to teach my son classical civilisation GCSE out of the pure goodness of her heart and refused to accept money. I knew that I could have put a gun to her head, and she wouldn’t have changed her mind so making her a mosaic as a small token of my immense thanks was my only option. So one day I sat down at my desk and within half an hour the drawing was ready. Things don’t usually work that way for me. I sweat and toil. I scrunch things up, fiddle about, flick through endless books without looking at what I’m seeing, surf the net for ideas, draw things and rub them out, getting increasingly exasperated until, after many trials and too many errors to count, I finally end up with something I can tolerate. But not this time. 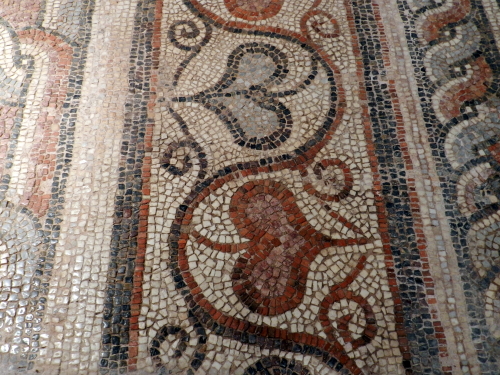 It was to be a mosaic inspired by the fresco (top) of Flora, goddess of flowers and spring, from the ancient Roman villa of Ariadne. It’s one of her favourite things and I discovered it through her. I took the flowering plant, its lightness and fragility, which is very similar to a plant in the park where my friend and I walk, and came up with a sketch which I actually liked first time round. It would have been an understated mosaic that made best use (or so I hoped) of the stone’s muted colour range, particularly the whites and light greys, but then my friend announced that she was going to get married. 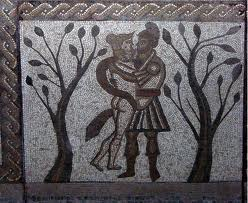 Well, it seems to me that you really cant get married without a wedding mosaic and unless I was going to make two mosaics, which might have been a little excessive, the fresco/park mosaic wasn’t right for this occasion. A mosaic of a couple snogging in the woods wasn’t quite the thing either, so back to my desk I went with my drawings and rubbings out and book flicking. I wanted something which was for them, which was about marriage and their life together, that was joyful but not excessively coochy-coo-ish. It was a hard one and here it is: 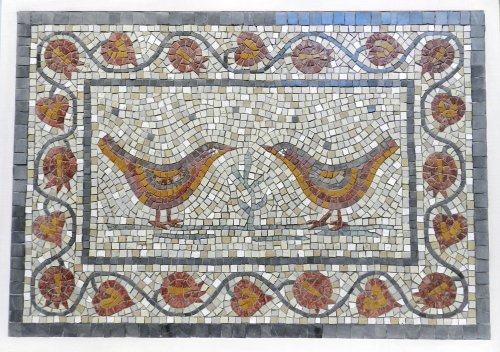 And here is the wedding mosaic in the making:

But now I have to work out how to say thank you, really, really thank you, for all her help with the GCSE…..