A retired engineer from Tel Aviv is an unlikely candidate to undertake the reconstruction of a Byzantine mosaic floor in Greece. But with hard work, determination and a generous amount of enthusiasm he transformed a few forgotten mosaic fragments ….

..into a digital representation of a lost masterpiece:

This story starts on a hot July afternoon in 2017 when I visited the abandoned ruins of a Byzantine church in Pelion, Greece. I was enticed there by Sue Wake of the Lagou Raxi Hotel who promised some mosaic fragments still embedded in the ground among the broken walls and tumbled stones of the building on a deserted stretch of the Aegean coastline. Jonathan Rivlin, a retired engineer from Tel Aviv visiting Greece to take my mosaic course, was the third person in the car as we turned off the winding road and bumped along a rough track and parked on a patch of grass near a perfectly scooped bay.

Nothing was immediately visible except a small chapel with a few fallen columns nearby and the waves quietly kneading the stones along the shore. But once we walked a little inland we could clearly see the outline of what was once the 1,600 year old church of Theotokos*. As ruins go they are not much to speak of. Brambles and weeds have grown over them and a tree has taken root in a side room. The main attraction is the mosaic fragments – the legs of a bird, a section of a repeat border pattern and the base of a plant. Even they, however, have the forlorn air of something that hasn’t got long to go, like one of those road side cafes still open after the main thoroughfare was been diverted to a new highway.

If I had had anything to do with it, the story would have ended there; a pleasant afternoon excursion, a few snapshots of the mosaics and a happy time soaking up the atmosphere. But Jonathan, who might strike you as an unassuming octogenarian, is in fact nothing less than a visionary, brimming with ideas and technical skill. Scarcely more than a year after our afternoon jaunt he had digitally reconstructed the entire mosaic floor, antechambers and all, built computerised walls around them, delved deeply into the history of Byzantine church construction and iconography and checked his research with Rina Avner, an archaeologist at the Israel Antiquities Authority. It made me feel quite giddy and I was only his willing assistant.

The first inklings of the soon to be all-consuming project to reconstruct the Byzantine mosaic floor came that very evening back at the hotel when Sue handed Jonathan and me copies of an report written in 1907 by a pair of young British archaeologists hoping for glory.  Alan Wace and John Droop excavated the Theotokos site over a three week period, employing 24 men. At first they had thought there was a chance of unearthing a Doric temple, but instead they discovered the remnants of the small church dating from around 450AD with its mosaic floor. Disappointed, they wrote a hurried account of their findings which was published in the annual of the British School of Athens and the site was left to nature to reclaim.

The next time anyone paid the mosaic floor any serious attention was a hundred and ten years later when Jonathan read the report and decided to turn his considerable talents and energy to reconstructing the mosaics. I would like to put it on the record that I just about managed to stumble through it in bed that night before putting it on my beside table and turning off the light. That, as far as I was concerned, was that. Little did I know that I would soon be embarking on a year-long saga of email exchanges, a lengthy process of online research and hours spent working on drawings to fill in the missing segments.

How to digitally reconstruct a Byzantine mosaic floor

Jonathan’s idea was that he would use Autocad software (commonly used in architectural plans) to reconstruct each of the floors in the seven rooms of the church so he set to work outlining the scaled drawings of the rooms onto his computer using the dimensions supplied by Wace and Droop. Next he added in the borders and repetitive patterns which were also given in the original report, measuring each element or segment, calculating how many would fit into the available space and replicating and adapting them as required. The process was painfully slow and laborious. The guilloche patterns in the narthrex alone took two weeks of work to reproduce digitally.

My job was to receive Jonathan’s black and white drawings of the floors and suggest colours that would be as close as possible to how the originals would have looked. If I managed to find extant mosaics with similar patterns to those at Theotokos I would simply annotate the photo with colour suggestions.

Needless to say the computerised palette is quite different to the colours of natural stone so compromises had to be made but I selected colours based on the Greek marbles I use in my own mosaics and kept within a limited, muted range. Once Jonathan’s coloured drawings began arriving in my inbox their simple unassuming beauty had me bewitched.

At this point, the idea of ‘just’ replicating the original site drawings online morphed into a decision to lay out the whole floor, filling in the gaps ourselves where needed. When Wace and Droop carried out their survey of the church they found that many of the mosaics were already badly damaged or destroyed. ‘Out of a total of 95 panels with pictures  [mentioned in the report] in the full church mosaic floor, 40 are described in words (such as bird, tree, flower, geometric pattern and so on) and not drawn. Only 18 panels were actually drawn,’ wrote Jonathan in a later account of the reconstruction process. (Below: pages from the original report)

This lack of detailed information was both a drawback and an advantage. Without knowing exactly what was there in the first place, any reconstruction was bound to be speculative. However, the absence of drawings meant that we were given a free rein to imagine the missing panels. My role as a colour adviser soon expanded to full-on creative director. That’s when the research began.

It was important that the ‘new’ panels would be in keeping with the existing mosaics so we separately embarked on searches to find and adapt designs which we borrowed from floors belonging to the same historical period as Theotokos, particularly from churches and synagogues. However, if we didn’t find what we needed we went ‘off piste.’ After all, this wasn’t meant to be a formal, academic project to minutely reconstruct a long vanished floor, but rather a way of bringing a neglected mosaic back to life, of exploring and re-animating it on our own terms.

In the outer vestibule (or Room D), for example, there were no drawings and only a cursory description in the original report of what the panels between the patterned borders contained so I was given carte blanche to fill them in as I pleased. The result was ‘Helen’s fishery’, a series of 16 panels, containing a variety of fish including one on a plate with a some chips scattered judiciously in the background. Here you can see how the process worked. First, a fish was selected from another Byzantine-era floor, in this case from Delphi. Next the existing fish was changed into a drawing within a frame which was sent to Jonathan to digitalise. Once done Jonathan returned the computer drawing to me and I would add the colours. Finally, he sent me the completed version and then once all the fish were ready they were inserted into the missing panels in the floor plan. 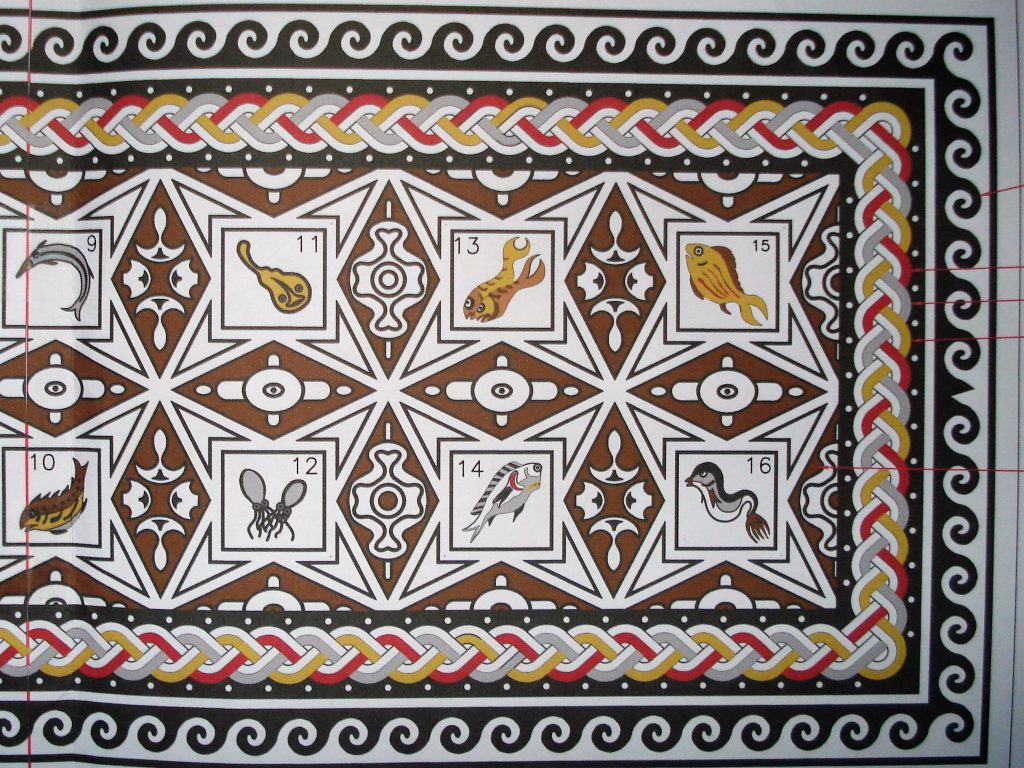 But the process was not always without contention. At one point, Jonathan suggested that I include a lobster amongst the other sea creatures but I resisted on the grounds that crustaceans do not occur in Byzantine mosaics and an animated exchange of emails followed. Eventually Jonathan conceded but not before both of us had thoroughly researched and argued our respective points. Later, when I wanted to change a bull into a cow (udders and pendulous bollocks don’t necessarily look that dissimilar), Jonathan point blank refused and reversed my transgender cow back into a bull.  However, when I thought a wild boar that Jonathan had included looked too much like a domestic pig he graciously allowed me to change it into a leaping dog.

At other times we were in total agreement.  A case in point was the partial drawing of the peacock mosaic (now missing) provided in the report. The peacock, an ancient Christian symbol of immortality and resurrection, would have been an important focal point in the entrance area of the church yet the design provided made it look scrappy, uneven and just plain wrong. Clearly improvements had to be made. 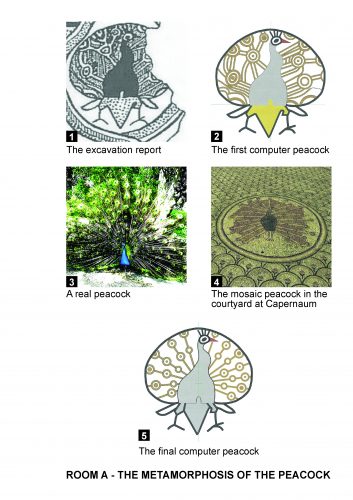 From my side, these changes were relatively straight forward – all I needed to do was go back to my sketches and redraw the offending the lines. For Jonathan, however, some changes resulted in hours of extra work. The process of inserting each design involved drawing a grid over it and then producing a matching grid on the computer. Coordinates mapped out on the drawing were then marked on the screen and joined up by the computer but often the resulting line was sharper or less curved than needed so Jonathan had to repeat the process twice or even three times to get it right. A single drawing could take him four hours to complete.

The more Jonathan worked, the more he discovered and the more he wanted to know. A side room (Room E) held a particular mystery and allure that he was determined to get to the bottom of. The small room with a single door, set to the left of the nave, had the most elaborate of all the mosaics – a large circle divided into eleven segments with interlocking lozenges and an unusual wave and guilloche pattern.  What made it all the more intriguing was that it was the only room whose mosaic floor was still intact when Wace and Droop carried out their excavations. However, despite noting that ‘the floor had a most elaborate mosaic’, and suggesting that it might have been a baptistery, Wace devotes only three sentences to it and moves on. After extensive reading and a consultation with Rina Avner, Jonathan concluded that the space was either used as a dressing room for the priests or place for the preparation of the Eucharist.

Some pages from Jonathan’s final report:

Next Jonathan wanted to establish how the church would have looked when it was in use and produced detailed architectural drawings of possible structures. 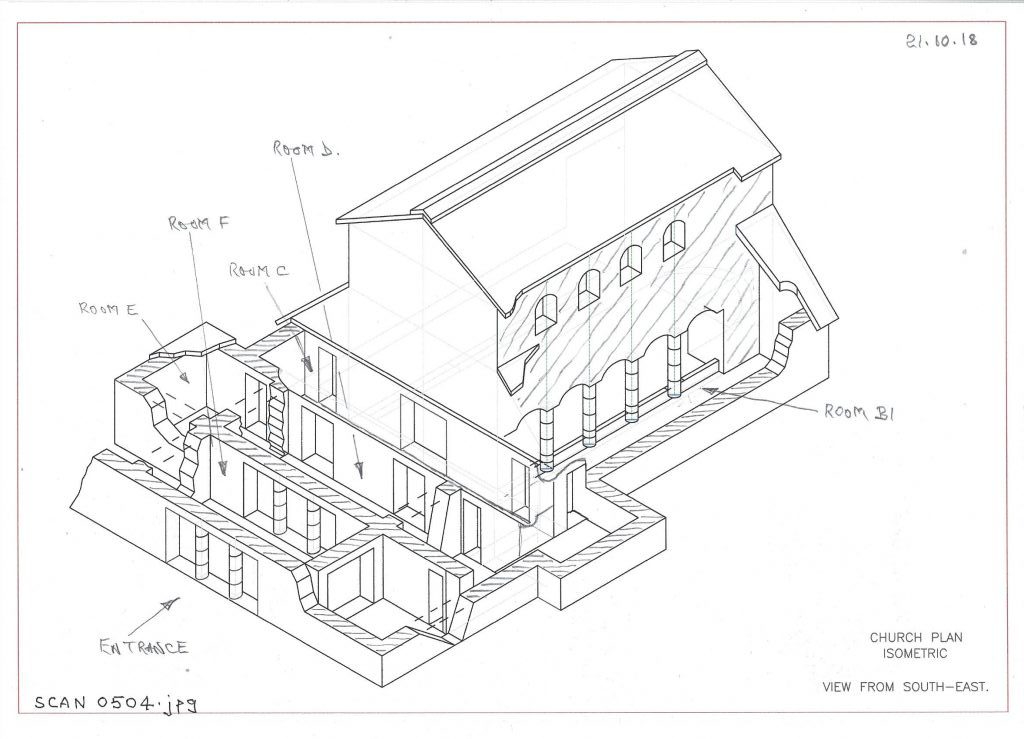 Even this was not enough. Jonathan’s final achievement was to work out how long the mosaic floors would have taken to make: “My calculation gives 4.3 man-days for 1 square metre of floor. For the church of 260 sq. metres x 4.3 man days = 1118 man days. This gives 223 working days for a team of 5 men working together. At 5 working days per week, taking into account the Sabbath and religious holidays. Total time for the Church Mosaic is 45 weeks. This is about 1 year,” Jonathan.

And thus is was that the Theotokos mosaic floor was reborn. Move over Wace and Droop!

*The Church is referred to as Theotokou in the original Wace and Droop report. This is the genitive form of the word and can only be used in conjunction with a noun, so I have chosen to use the nominative.