When I made plans to go visit the Heraclea Lyncestis mosaics in Macedonia with Tessa Hunkin I was slightly concerned that the mosaics would play second fiddle. Tessa Hunkin is my mosaic heroine. In case there’s anyone out there who thinks you dont know her, you do. She’s the one that set up Mosaic Workshop in London’s Holloway in the 1980s with Emma Biggs. I bet you have at least one of her many books on various mosaic subjects from making techniques to garden mosaics and mosaic patterns. She won the 2014 British Association of Modern Mosaics Mosaic of the Year award for the Shepherdess Walk Mosaic that she created with the Hackney Mosaic Project and has designed and made a string of mosaics for public and private spaces which consistently make my jaw drop.

Adding on the fact that I rarely meet anyone from the wider mosaic world, you can see why I thought I might be somewhat distracted. But since we had a lot of motoring to do to get from Thessaloniki in northern Greece to the Heraclea Lyncestis mosaics which are just outside Bitola in Macedonia and then on to see the mosaics of Stobi there was plenty of time to talk. Tessa was travelling with her school friend, Debbie, and in the space of the day as we drove through rolling, seemingly empty countryside along roads bordered by brilliant red poppies and towering thistles we managed to cover quite a few topics.

And that’s not counting the time we spent admiring and analysing these Heraclea Lyncestis mosaics which date from the end of the 6th century and were laid in the porch or narthex of a Great Basilica during the years when the city was an important episcopal centre. Heraclea Lyncestis was originally founded by Philip II of Macedon, Alexander the Great’s father, in the middle of the 4th century BC but it wasnt until the Romans conquered it about two hundred years later and built the Via Egnatia through the city connecting the Adriatric and Aegean seas that it developed into the recognisably Roman city we see today. The Romans inevitably added the necessary accoutrements of Roman life including baths and a gladitorial theatre and when the empire split and the city converted to Christianity the mosaics were made to decorate the new religious buildings.

Nowadays Heraclea Lyncestis is a quiet ruin manned by a single guard. When we were there opera music wafted over the stones from an disused cafe and there was still snow on the mountain behind the site. No one tutted or shooed you away if you balanced on the rickety gang planks which straddle some of the broken walls. For two hours we were the only visitors except for the lizards and armies of tiny red spiders that scurried over the tesserae.

This porch is the most impressive of the Heraclea Lyncestis mosaics but there are others to see which are less well preserved and distinctly sub fusc in comparison. Judging from photographs posted on line I think there must be more mosaics at the site which are not on permanent view but this one is so detailed in it’s design, rich in its colours and intriguing in it’s composition that we felt no need for anything more. 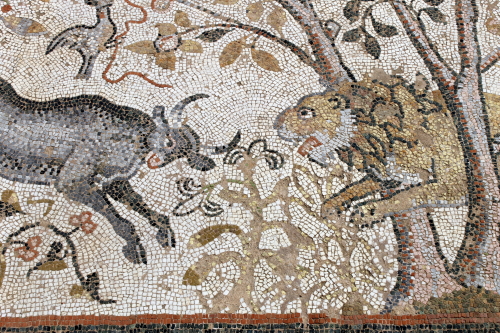 It depicts a scene of earthly paradise, abundant with flowers and birds, wildlife and trees, fruit and fish. A bull flicks it’s tail as it lunges towards a pouncing lion, a leopard tucks hungrily into a fallen deer, slobbering blood onto it’s prostrate victim, birds rise in panic over head and a red hunting dog strains to break away from it’s leash. The composition is balanced by a central sprouting urn which is cupped by thick acanthus fronds. On either side of it are deer and peacocks with multi coloured wispy tails and the whole mosaic is framed by a wave border and an elaborate swastika pattern entwined around panels showing various kinds of sea life and overweight geese. The designs are lifelike and lively, full of movement and tension. See for yourself:

With the exception of the central part of the mosaic, the design is remarkably free of any rigid stylisation. Each of the trees is different. The first, (from the left to right) is a pine tree with bulbous cones:

Beside it is a fruit tree – a cherry perhaps? – laden with produce:

And then there is this which could be a chestnut:

Passing over what seem to be two palm trees on either side of the urn which are so badly damaged that it’s hard to tell, there is a stunningly modern leafless tree:

Then a badly damaged broad leaf with what look like bunches of grapes hanging from its branches but are surely not because other grapes elsewhere in the mosaic are clearly attached to distinguishable vines:

Then there’s the fig (above) to which the hunting dog is tied and a pomegranate tree under which the leopard gorges itself:

We spent a long time marvelling at the colours – that blue!

Musing over the use of glass:

And puzzling over restoration and strange anomalies:

It was wonderful to be able to get up so close to the Heraclea Lyncestis mosaics:

And to have the time to savour every detail:

Then, when we were quite done, and beginning to think about moving on to Stobi, we wandered around the site and stumbled upon these plastic pots filled with ancient tesserae:

and other bits and pieces.

Have your own little wander around Heraclea Lyncestis and watch this very short film: https://www.youtube.com/watch?v=J9CphGyF_MA

Coming next: a two part post on mosaics and social media to mark my two year mosaic blog anniversary!