Savouring the mosaics of Corinth

I have a new theory that the particular pleasure a museum can bring is not so much in the exhibits themselves but rather in the person one is with (or ones that one is without). True, there are museums so wonderful (the Metropolitan, the British Museum, the Cairo Museum), that one can go with a hoard of elephants and one couldn’t fail to be moved, but ideally museums need to be savoured. I have been to see the mosaics of Corinth, which are scarcely an hour from our home in Athens, at least twice before but savouring was never an option. With three boys in tow, my attention was taken up in the room full of ancient votive phalluses and in working out how far we were from the nearest ice cream kiosk.

But on this trip to see the Roman mosaics of Corinth things were different. In the company of a good friend, with the whole day ahead of us, savouring was not only possible but almost compulsory. The museum at the ancient site is small, the exhibits are few, the ruins were empty, we were alone and we could do entirely as we pleased with no one tugging at our sleeves or suddenly announcing an urgent need to use the toilet. So, since we had the opportunity to savour, savour we did.

The four mosaics of Corinth

The mosaics of Corinth are particularly ripe for savouring because there are so few of them, four to be precise, and all four are wall mounted. A single room with a few mosaics tacked up on the wall might not compare to visiting to whole mosaic collections like those at Zeugma Mosaic Museum in Gaziantep, Turkey or the Great Palace Mosaic Museum in Istanbul but their paucity concentrates the mind and the ability to see them up close compensates for a lot. The mosaics of Corinth come from  Roman villas near the main site and date from the second to third century AD. Here they are:

Now look again and tell me how that pattern was made. Pegs and string for the circles, yes, but see how the triangles radiate outwards from small to large and each one is gently curved, like a child’s spirograph but more fiendish. How the heck did they achieve that? 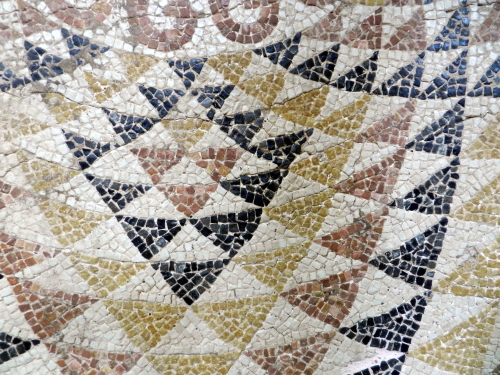 Details in the mosaics of Corinth

Mosaics in situ or transposed to museum floors are impressive in their way, but for the lover and maker of mosaics, nothing quite beats being able to rub shoulders with them. But there are only four, two of which are fragments at that. Five minutes. Tak tak, as the Greeks would say, what is there to keep you looking? Well, the detail of course. I once spent a whole week in the Cairo Museum in order to write an article about it’s 100th anniversary but it was days before I noticed that Tutankhamen’s bed had the most wonderfully pedestrian hinges you’ve ever seen. Hinges for a pharaoh! So it could be tidied up like an Ikea foldaway table. It’s time to linger over the mosaics of Corinth. First, the colours:

Next the lines and movement in the cockerel:

And all the other little details:

With time and the right company one can look again at the face of Dionysos:

And admire the method of the filling in:

And when you’ve had your fill of the mosaics, there’s plenty more to see. Kate found an exquisite glass bracelet, as ephemeral as a soap bubble, lying on an inconspicuous lower shelf, which seemed too fragile even to photograph:

All this, before you even start on the vast site itself which encompasses ruins from the Greek and Roman eras of the city’s history: