The Pique Assiette House in Chartres, France, was made by Raymond Isidore over a 25-year period starting in the 1930s and evolved into a temple of mosaic creation.

The reason I love the Pique Assiette House in Chartres, France, is simple: it’s bonkers. It is a physical manifestation of the compulsive, obsessive, unremitting urge that seizes mosaicists and wont let them go. It starts innocently enough on an idle afternoon: a broken plate or two, a passing thought about not wasting things coupled with a vague interest in DIY home decor, a bag of concrete mortar in the shed that needs using up, and before you know it you’re possessed by a force that you cant control. 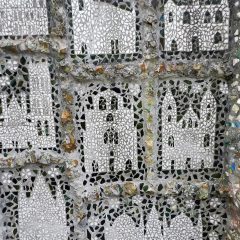 This urge comes in different degrees on a scale of one to ten with one being the need to decorate flower pots on a quiet Sunday and ten being, well, Raymond Isidore. Born at the beginning of the 20th century, Isidore was employed as an apprentice at the age of 13 and then went on to work as a road builder and cemetery caretaker, living a quiet and unassuming life until the 1930s when he built a small house on the edge of the medieval city of Chartres.

It all started when Isidore noticed  ‘broken glass, fragments of china, [and] broken pottery,’ on walks near his house and began to collect them. That, dear reader, is Tell Tale Sign Number One. Give me a person who can’t go for a walk without stuffing their pockets with shells and pebbles and I will give you a closet mosaic maker. Unidentified, almost certainly, but a mosaicist in spirit none the less.

‘I picked out the good stuff and threw away the bad. I piled them up in a corner of my garden. Eventually, the idea came to me to make a mosaic of them to decorate my house. At the outset I envisaged nothing but a partial decoration limited to the walls,’  said Isidore in an interview printed in the brochure sold at the ticket office at the entrance to the Pique Assiette House. Tell Tale Sign Number Two. The victim of the mosaic urge almost always starts off thinking they are going to dabble.

Isidore began by decorating the interior of the Pique Assiette House. The three-room house is compact and Isidore’s self-appointed goal must have seemed easily achievable but even at this stage keeping within the limits of the task was not an option. Tell Tale Sign Number Three. The urge can not be controlled, it bursts out of its confines, the possibilities that mosaic unfolds start leaping at you from all directions, as soon as one project nears completion, the next rears its head and demands attention.

Once Isidore had finished mosiacking the walls and the floors, he got to work on the outside surfaces and everything else in sight – the chairs, bed, table, wood burning stove, radio, sewing machine, carriage clock, watering can, flower pots, wheel barrow and radio. But that didn’t satisfy him.

He began building in the garden. He added grottoes and a chapel, courtyards, a summer house, an outdoor toilet, a statuary and even a ‘tomb’. All of it is covered in mosaic: figures, animals, insects, birds, religious themes, churches, rural scenes, flowers, leafy tendrils and just patches of tessellated colour. Isidore, a working man with no artistic background, was mocked for his efforts but carried on regardless. He experimented and played, adding pigments to the cement mortar, introducing different materials amidst the broken china and glass, inserting the bottoms of perfume and medicine bottles as well as figurines in spontaneous clusters.

However, it would be wrong to think there was no method in Isidore’s mosaic madness. The style of his work is naive, the figures are crudely drawn, the proportions are odd and and there are peculiar juxtapositions and details but he was a man with an obvious vision and sense of purpose who made things with considered thought rather than haphazard abandon. There are clear demarcations in his designs, a sensitivity to space and to the visual impact of his creations as well as a penchant for the surreal. The chapel, built between 1953 and 1956, has a dazzling blue background symbolising heaven with predominately white, yellow or dark green glass details. The black courtyard, or tomb, on the other hand, is restrained and elegant; the wall of churches is almost entirely rendered in black and white so that the architectural details of each building is picked out.

There are points, moreover, where Isidore allows his creations to breathe. It seems apparent that he realised that in order for pique assiette to be effective it needs room – it can be the visual equivalent of a pesky fly if done in excess, buzzing and jabbing at the eye, so Isidore sometimes filled areas of wall with moulded concrete forms or he etched designs into the mortar and then block painted them. Here, he restrains his use of mosaic, embedding only the minimal outlines of birds and leaves, using wide spacing and relying on the tesserae to produce a delicate, embroidered effect:

Generally speaking, there are three main themes in Isidore’s work: i) the church and episodes from the life of the holy family ii) Chartres and local rural life and iii) lots and lots of busts of women in profile. Some, it is safe to assume, were of his wife, Adrienne Dousset, a widow with three children who was eleven years his senior.

And dogs. The more you look, the more dogs you see. Sitting patiently, close and attentive, with that doggy I’m-ready-when-you-are look about them.

However, his mosaics cant be pigeon holed. There are strange incongruous additions like the pagoda shaped eaves at the front of the Pique Assiette House, a fire breathing dragon coming in off-side as the Virgin Mary stands in prayer to receive the Annunciation and a peasant woman stirring piglets (or are they children?) into a pot.

And yet for all the wibbly wobbly wonky weirdness of the Pique Assiette House, some of Isidore’s best work is piercingly beautiful, in a single choir-boy voice kind of way. Take his mosaic interpretation of the stained glass window of Chartres cathedral and the sinewy and quietly elegant path ways:

Take your pick or surrender to a bit of each and a combination of all at the Pique Assiette House:

For a step by step tutorial on how to make your own pique assiette mosaics, please go to my earlier blog post: http://helenmilesmosaics.org/blog/tile-adhesive-method/ and to learn about the finer points of the technique read Julie Sperling’s guest post:

The secrets of using thinset for mosaics by Julie Sperling