I don’t want to get carried away, but I think the Rotunda mosaics in Thessaloniki, Greece, might be it. It as in the beginning. Not the beginning of mosaics as we know them (that happened elsewhere and early examples can be seen down the road at Pella), not even the beginning of Christian mosaics (although that’s possible) but the beginning of the use of mosaics in Byzantine architecture to dazzle and awe. If not the actual beginning, then as close as damn it to the first use of gold and brilliance, of life-like mosaic portraits, intricate architectural designs, and soaring, glittering ceilings made to draw the eye upwards and induce a feeling of humble wonder at this earthly reflection of heavenly glory.

The Rotunda was built in 306 AD and was originally intended to be the mausoleum of the tetrarch Galerius but he ended up being buried in Serbia, and so around a century later the abandoned structure was turned into a church and this – sometime in the early 5th century – is when the mosaic decoration was added. Bearing in mind that Constantine I moved the capital of the (disintergrating) Roman empire from Rome to Byzantium (later called Constantinople) somewhere between 324 and 330 AD, then these could well be the very first examples of Byzantine mosaics as we have come to think of them – of stylised Christian themes, glinting with gold and dripping with multi coloured glass.

It certaintly means that the Rotunda mosaics, as fine and brilliantly executed as anything in Ravenna, antedate their famous counter parts by at least 100 years. There are other serious contenders for first place in the claim to be the oldest Christian church in the world (the Church of the Nativity in Bethlehem) and there are other early Christian stuctures with mosaics (the Basilica of Aquileia is an obvious example) but the Rotunda mosaics could quite easily be the oldest of their kind and so I am going to leave that delicious possibility in the air as I admire the fragments that remain.

The Rotunda mosaics, which have recently been revealed after decades smothered in scaffolding, consist of three distinct zones in the central dome. The lowest band is the best preserved and shows a number of figures thought to be martyrs or possibly donors standing in front of a series of Hellenistic and Roman buildings set against a gold background. Some of the buildings have been identified and include the Jordanian tombs of Petra and the Library of Ephesus in Asia Minor. The middle band is almost completely lost but we have a circular row of male feet in sandals thought to have belonged to saints or angels against a green background. Lastly, there is the central design which is assumed to have shown the figure of Christ,

The only problem with the Rotunda mosaics is that is that you cant actually see them. Earthquake damage over the centuries is largely to blame but even if they were miraculously intact, the fact remains that they are typical crink-in-the-neck mosaics – mosaics so high up on the 30 metre domed ceilings that you haven’t a hope of seeing them in detail unless you have a pair of binoculars or a powerful camera zoom.

So the most you can do, for now, is to enjoy the mosaics in the vaults of three of the rectangular recesses set into the six-metre thick walls which are purely decorative, showing birds and fruit, representing the fruits of paradise, set within geometric and twisting bands of silver tesserae on a gold background..

Under the years of Ottoman rule, the Rotunda became a mosque but its mosaics remained. A minaret and a fountain were added to help serve its new function and these remain although when the city won independence in 1912, it was re-consecrated as the church of Agios Dimitrios and it is now a UNESCO World Heritage site.

Despite the earthquake damage and the difficulty of seeing the mosaics, I am fond of the Rotunda.  It’s eccentric roundness and formidably ancient brickwork make it a pleasing relief from the ugliness of the modern utilitarian architecture around it. I like it, too, for these broken stones in the gardens which I assume come from the vast Jewish cemetery which once adjoined the building, was destroyed during Nazi occupation and now lies under the city’s university complex. I cannot read the names or inscriptions half buried in the long grass, but I can remember. 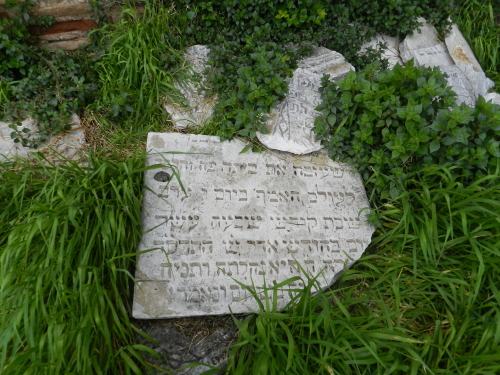