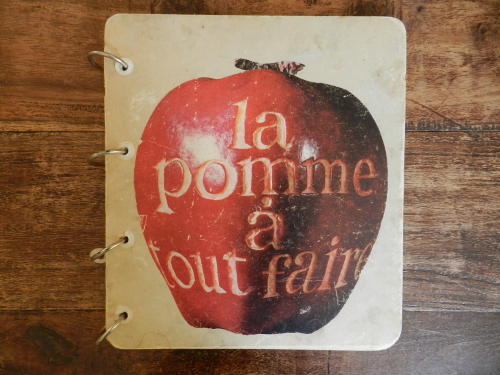 …and a curious coincidence

Coincidences are fun. Their unlikeliness – the meeting of an old school friend on a hiking trail in Papua New Guinea or realising your fiancé also took the 7.13 to Paddington from Brighton every day in 1982 – is so delightfully impossible that it seems charged with an extra meaning which remains stubbornly indefinable. 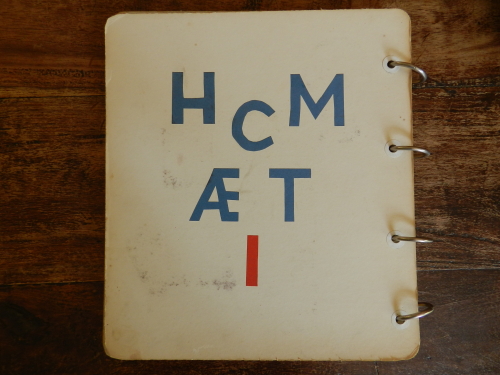 So it is with the book my father made me for my first birthday in Glasgow more than 50 years ago. It is a spiral bound picture book made on hard card with photographs that he must have painstakingly cut out of magazines and arranged in improbable juxtapositions to amuse me.

Among the pages is this one – a spoon, an egg, a bunch of grapes and – what’s that? – a mosaic head of St Dimitrios of Thessaloniki.

There are an awful lot of photographs that my father might  have chosen and the chances of him coming across, let alone selecting, a picture of a mosaic of St Dimitrios of Thessaloniki, a Christian martyr who was speared to death in the 4th century, must be pretty slim. Equally slim were the chances of me ending up living in Thessaloniki almost four decades later, given that the decision to move there was made on nothing more than a whim which turned out to be a particularly bonkers one.

The ‘real’ St Dimitrios of Thessaloniki

I now live in Athens but a few weeks ago I went back to Thessaloniki to see the mosaic of St. Dimitrios, who is the city’s patron saint and has a church dedicated to him.  It isn’t a spectacular mosaic – the church was largely destroyed by fire in 1917 and the mosaics that remain in situ are distinctly dour and sub fusc. Here he is, the saint himself, that picture book face now attached to its body. St. Dimitrios, who was reputed to have miraculous powers, is shown with two rather glum children pressed up against his knees.

I didn’t do very well at taking photos of St. Dimitrios that day partly because the church mosaics are on inconveniently placed columns which makes them hard to see, and partly because I was distracted by a school group of teenagers. Pimply young men with nascent facial hair in baggy track suit bottoms who were paying no attention at all to their teacher but knelt and kissed the icons and crossed themselves as feverishly as island crones in widow’s black.

But here’s a photo from another mosaic of St. Dimitrios’ robes and strappy pumps:

And another one I borrowed from www.macedonian-heritage.gr of St Dimitrios of Thessaloniki with two of the church’s founders and wearing – take note – yet anther fetching robe: 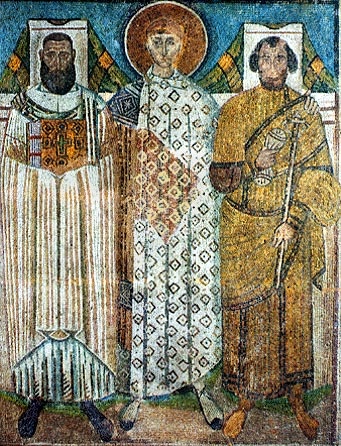 The interesting thing about the mosaics of St. Dimitrios of Thessaloniki is that they were made as panels which were commissioned by individual church officials and ordinary citizens over a period of four hundred years between the 5th and 9th centuries and were not designed as part of the fabric of the building.

The best examples of these panels – or maybe I just mean the ones which are easiest to see – are the two which are now displayed in the city’s Museum of Byzantine Culture. Here’s the saint with another supplicant tucked discreetly between his robes: 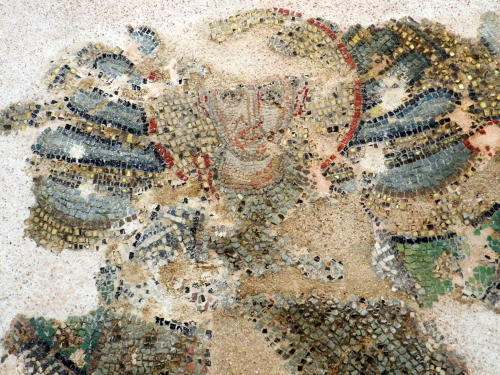 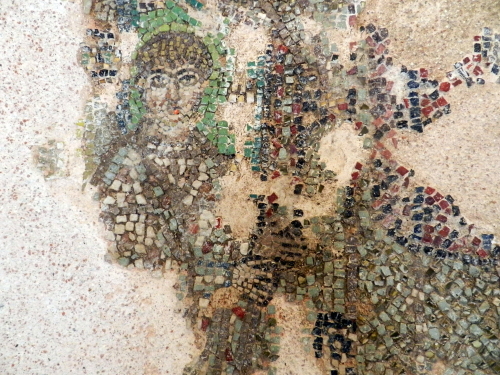 And this gorgeous piece of a peacock and urn where the benefactor for once felt that he or she didn’t have to make a star appearance: 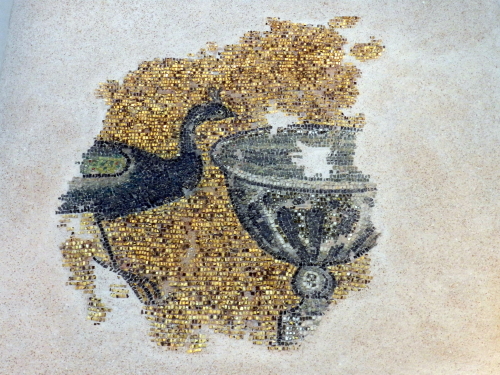 The church also has several modern mosaics of the saint. These mosaic icons are the classic form in which mosaic is practiced in this country – highly stylised religious works made using the indirect method. Both my mosaic teachers in Thessaloniki and Athens taught mosaics in this style and were highly adverse (even downright hostile) to any change from the traditional approach. 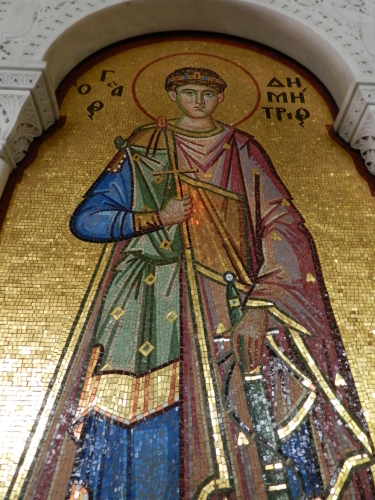