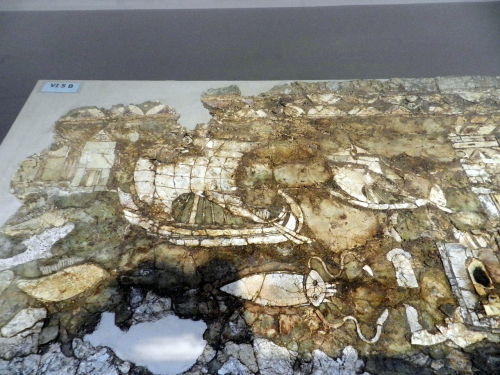 My friend Alison Scourti, who keeps cropping up because she is almost the only person I know who shares my passion for mosaics, and therefore shares a part of who I am, told me to go see the glass mosaics of Kechries at the Archaeological Museum of Isthmia not far from Corinth, Greece. Needless to say, I didn’t know what she was talking about. She told me they were Roman and were oddly wonderful. Roman glass mosaics? Who ever heard of such a thing? Bits of glass in Roman mosaics, fine. But whole mosaics made out of glass, just didn’t sound right. I have seen the opus sectile mosaics in the Palazzo Massimo Museum of Rome, but they were made, as one might expect, with different coloured sections of marble. Not glass. 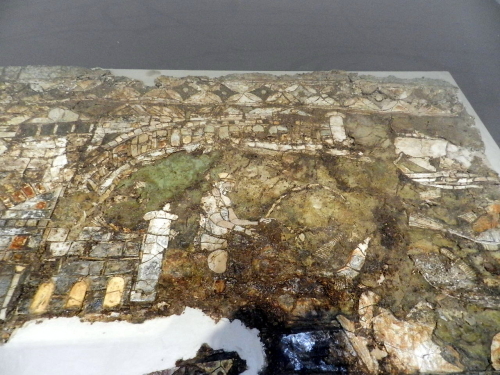 But a mosaic is a mosaic and if Alison said I must see them, then I clearly must, so on a recent trip to the Venetian town of Naphlion in Greece’s Peloponnese region, we stopped at the one-room museum which houses findings from the adjacent archaeological site. The museum has all that one might expect of a museum from an important site dating from the seventh century BC with lots of additions and modifications over the following centuries. There are pots and jewellery and clay figures but there are also the glass mosaics that Alison had insisted I see. They are panels not floor mosaics and rather disconcerting in their unexpectedness. Seeing them was like seeing a middle aged lady in twinset and pearls on the 10:23 to Henley take out a copy of NME from under her Daily Telegraph. One’s preconceptions get all jumbled up. They are  strange; they open another up another window, a different vision of what you thought you knew and their strangeness makes them wonderful indeed. 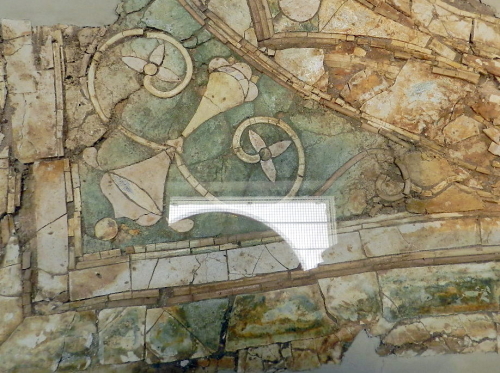 It seems that there were once as many as 126 panels which were probably brought over from Alexandria, carefully taken off the ship which carried them, and stacked in their original wooden cases against a wall. But before they were installed, an earthquake struck and the panels were covered by the sea and never recovered until the 1960s. According to the blurb at the museum they ‘belong to the mosaic decorative arts which originate in Mesopotamia and Egypt. Similar compositions in glass or marble were found at Ostia, the harbour of Rome. The style, belonging to Hellenistic, Roman and Egyptian tradition, is already reminiscent of the Byzantine style.’

I took tea (and delicious cake) the next day with Matthew Dickie and Elizabeth Gebhard, who was there when the panels were excavated and who has been director of the University of Chicago excavations at Isthmia since 1976.  She explained that the mosaics were stacked facing each other, and that when they were discovered they were fused together by time and water to such a degree that it was largely impossible to separate them. Therefore what we now see is the backs of the works.

Here, to help you out with the concept of the decorative arts originating from Mesopotamia and Egypt, are two examples of opus sectile from the Palazzo Massimo Museum in Rome: 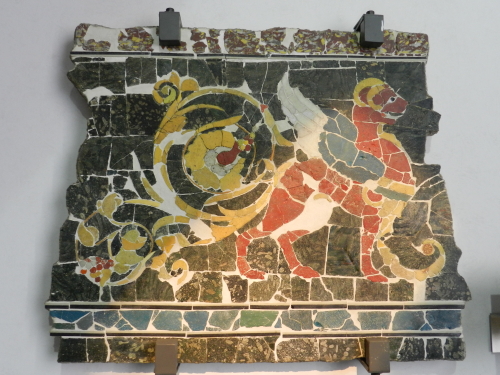 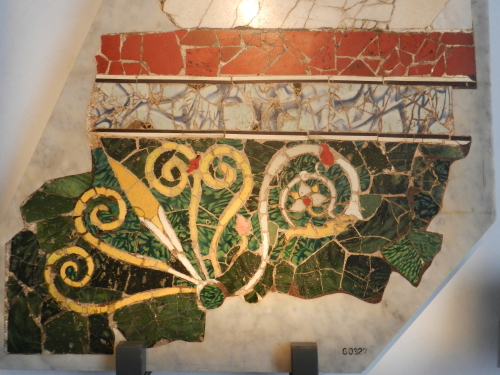 For me, the beauty of the panels lies in their naïve execution and the appreciation they reveal of their makers’ delight in the natural world and pride in man’s achivements. The gigantic squid next to a ship in full sail with a gorgeously curved prow. The fisherman sitting staring into the sea depths in front of a harbour lined with impressive-looking public buildings. The colours, now muted, must have been fabulous. A bit like the colours of the socks my mother knits. 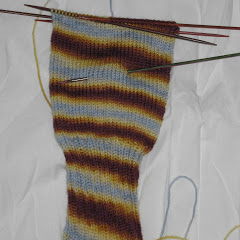