Gaziantep, a city in southern Turkey some forty miles from the Syrian border, has become a bustling hub at the centre of the Middle East’s latest conflict. It’s a destination for spies and refugees, insurgent fighters and rebel leaders, foreign-aid workers and covert jihadists ... The Vortex, A Turkish city on the frontier of Syria’s war. By Robin Wright, The New Yorker. December 8, 2014.

It can’t be easy having me as a mother. Our summers, always complicated because of living in Greece but having family in the UK, are additionally complicated because I insist on making a detour if we ever find ourselves within range of an ancient mosaic. And when I say ‘within range’ I use the term somewhat loosely. It is not such a big deal to add Aquileia into the agenda if we are already stopping in Ravenna on one of our road trips back home and of course anyone wanting to see Pompeii would have an equal interest in the (mosaic rich) National Archeological Museum in Naples, but driving close to 1,800 kilometres (one way) across Turkey from Thessaloniki in northern Greece to Gaziantep to see the Zeugma Mosaic Museum was perhaps pushing things a bit far.

ISIS [is] widely believed to have penetrated Gaziantep. In October, police, in two separate raids in Gaziantep Province, seized twenty nine suicide vests, three hundred and thirty pounds of C-4 explosives, grenades and other explosives and Kalashnikovs. The New Yorker, as above.

But in 2012 we set off with a car full of boys (aged 15, 13 and 10) without a second thought. We stopped in Bursa for a hamman and a night’s sleep and drove on to Cappadocia to explore the rock caves and then it was a mere nothing to reach Gaziantep near the Syrian border.

A mere 500km in fact, which really is nothing if you consider that we had four wheels and a 2 litre engine and didnt have to ride an exhausted horse all the way from China (Zeugma was a way station on the Old Silk Road) or slog it across the Anatolian plains encumbered by heavy armour in order to take up a post guarding the farthest reach of the Roman Empire from the invading Persians.

And what’s 500km when at the end of the journey is one of the largest collections of ancient mosaics in the world (The Archeological  Museum of Hatay in Turkey and The Bardo Museum in Tunisia hotly dispute the claim to be the largest), displayed in a specially built modern building? We had scarcely found our hotel near the centre of Gaziantep and parked the car before I left my husband and boys to explore the souq and headed straight for where I wanted to be: the Zeugma Mosaic Museum.

Americans in Gaziantep have been warned that ISIS operatives are tracking the activities of Westerners. U.S. officials remain in the city only a few days, or even a few hours, as they carry out their missions. The New Yorker, as above.

At last, I was here. And here were the mosaics I’d so wanted to see whose story, let alone their beauty, is remarkable. Founded by a general from Alexander the Great’s army in 300BC, Zeugma was conquered by the Romans in the first century AD and for two hundred years it flourished as a bustling trading and garrison city on the banks of the river Euphrates with a population of up to 70,000. Public buildings, baths and luxurious villas were built with no expense spared, boasting the latest mod cons from piped water to glass windows, and of course exquisite mosaic floors.

Then one thing after another went badly for Zeugma. The Roman empire declined, the city was sacked and burnt and earthquakes destroyed much of its finery. For the ensuring centuries no-one paid the ancient city much attention until a project got underway in the 1990s to build a massive dam across the Euphrates which would flood parts of Zeugma and the surrounding area. As archeologists began to survey the area, antiquity smugglers also got wind of the potential riches to be harvested from the threatened site, and the race was on.

Even as the waters of the dam began to lap at the ruins, desperate attempts were made to rescue the mosaics and other priceless artefacts but sometimes the looters got there first, cutting out heads and figures from the mosaic designs to sell on the illegal market. The need to lift the mosaics as quickly as possible from the encroaching water meant that some were hastily rolled up and badly stored so that when experts finally had the chance to examine the works, stone tesserae fell away in handfuls and glass disintergrated to dust.

A Senior State Department official who was visiting [Gaziantep] told me that if he came under attack there his only option would be to hide under his hotel bed. The New Yorker, as above.

Despite all the difficulties, whole pavements and dozens of mosaic panels were rescued and restored and 1,700 square metres of mosaics are now on display including the haunting fragment known as The Gypsy Girl. Their subject matter often has a watery theme which is not surprising given their position on the banks of the Euphrates. Take the one of  Poseidon with Oceanus and his wife Tethys (above) surrounded by all kinds of sea life. Other subjects were taken from myth (Dionysus’ marriage to Ariadne) and legend (Achilles setting out for Troy). I spent hours there and went back the next day but the museum has no natural light, many of the mosaics are laid on floors as they would have been in their original positions and my photography skills are limited so I apologise for not being able to shower you with wonderful photographs. But here are a few of the (marginally) better ones:

But perhaps my favourite is this absurd little (badly photographed) detail of a floppy eared lamb resting next to a bunch of flowers neatly tied with a ribbon. Kitsch was clearly alive and well two thousand years ago: 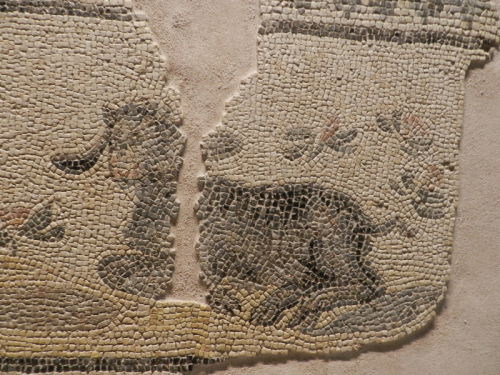 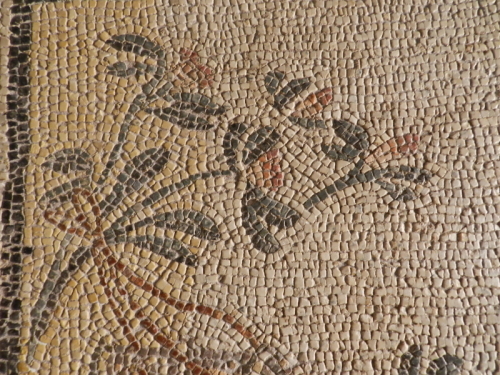 We all took to that part of Turkey and vowed to go back little knowing how quickly things would change. In recent weeks noone could have escaped seeing the shocking photographs of ISIS fighters smashing statues in the Mosul Museum or reading about the bulldosing of the ancient cities of Nimrod and Hatra.  At least the Zeugma Mosaic Museum is not threatened and now that ISIS has been defeated in Kobani it may even be safe to visit it again but mosaics are hardly a priority in the light of the destruction and suffering being carried out by the jihadi fighters which is why, for now, it’s Goodbye to Gaziantep for me.

For more information about the rescue and conservation of the Zeugma mosaics watch this fascinating video: