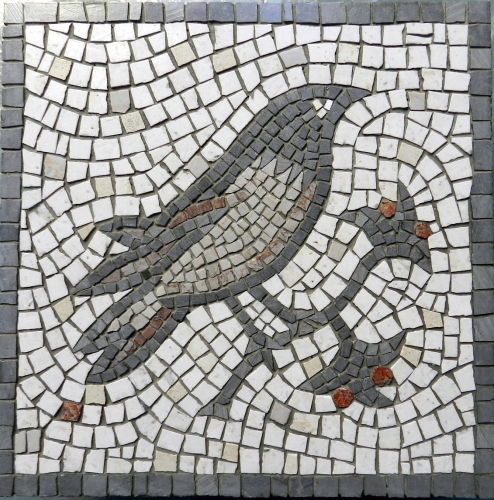 Making a mosaic trivet: an easy project in photos.

In case you’re wondering, a trivet is a pot stand. Its not a word I use much but Americans seem to be comfortable with it for reasons of their own just like they like to say ‘suspenders’ when they mean things to hold your trousers up, but let’s not start on that one. It’s a thing for putting hot pans on so that you don’t mark the surfaces. My aunt, who is American and lives in Connecticut, has asked me to make one for a dining room table and although I have never made one before, I am happy to oblige. Ever keen to get new blog followers, I have been reading up about social media recently and it seems that I ought to be posting short videos on Youtube so I think I might even do a mosaic trivet making video some time soon so keep your eyes and ears peeled…. But first I need a new hair do or a brown paper bag.

Meanwhile, here’s a project: making a mosaic trivet using the direct method (which means sticking the tesserae directly on the board). Simple, straightforward, no fuss and a useful thing to have in any house.

You can see the whole project below in photos so you can get an idea of what’s involved. Later posts will give detailed instructions for making a mosaic trivet in four parts:

Part I: Preparing the board.

Part II: Designing the mosaic and choosing the materials.