It’s not unusual for me to look at an ancient mosaic in situ or pore over the details of one hanging in a museum and seriously wonder if there’s any point in what I’m doing. Modern mosaics inspired by ancient designs. That’s me but, I mean, really? Why bother? Why go to the effort of doing my own designs when I could just make Roman mosaic copies? After all, the Romans have pretty much covered it: gorgeous colours, exquisite patterns, arresting designs, grandeur, domesticity, humour, tenderness, you name it, the Romans have done it mosaic-wise. Done it on a massive scale. Done it so well that thousands of years later we still admire their workmanship. It’s enough to make you feel like a paltry foot soldier, dusty and dishevelled, scampering to keep up in the wake of the mighty Roman armies.

And yet. There’s always an ‘and yet’. And yet when I surf the internet or click absent mindedly through social media, time and time again I am stopped short by modern examples of Roman mosaic copies. They keep cropping up: students’ copies of the famous fish skeleton from the Vatican’s Upswept Floor; multiple versions of Pompeii’s Cave Canem; endless backward looking doves perched on basins; gods and goddesses, peacocks, still lives, hunting scenes. It doesn’t matter that we are surrounded by dazzlingly fast high tech machines and can eat a pineapple for lunch which has been flown overnight from the other side of the world, Roman mosaics still have a firm hold on our collective imagination.

The term ‘Roman mosaic copies’ covers an enormous range of mosaics of different levels of skill and exactitude. Some modern mosaicists aim to replicate the original works down to the very last detail. Colours are meticulously researched to ensure they match the originals as closely as possible. Tessera are painstakingly laid in the same configuration as the mosaic being copied.

Not a piece is out of place but without wishing to dismiss what they are doing I can’t really see the point of this. A modern mosaic is not and never can be an original however closely it might resemble it so why waste the effort trying to reproduce it? Well, one reason could be that sometimes you would be hard pressed to tell the copy from the original as is the case with this mosaic of a wine glass and flask by Koko Mosaico of Ravenna:

With the exception of true masterpieces like this one, I find very precise copies can be lifeless and dull. They have no zing, no appeal. They are technically perfect but it’s as if their heart has been gouged out. Think of a supermarket orchid in a matching plastic pot.  Then think of a bunch of freshly picked delphiniums in a jam jar on the kitchen window sill. The best Roman mosaic copies are the delphiniums.

You can see what I mean when you look at this tiger cub by Michael Kruzich of MK Mosaics. Anyone would know at once that it isn’t an original. But the whole point is that it’s not meant to be. It is a copy of part of the 4th century tigress and cubs mosaic from the Cleveland Museum of Art but at the same time it is something entirely modern and new.

Roberto Centazzo of Stone Folio Mosaics also makes copies which are extremely close to the originals both in size, the way the stones are cut and the flow and yet (I warned you there would be more ‘and yets’) avoids making slavish reproductions:

This is precisely why I can’t resist making Roman mosaic copies. Despite suffering from the dusty foot solider syndrome when confronted with the originals, I find myself drawn to making my own copies both as a quiet act of homage to the Roman’s achievements but also because the more one looks at them, the more one learns. Sitting down and really studying a Roman mosaic by copying it is one of the best lessons in ancient mosaic techniques that one can take. Here is an example of the ‘Vatican dancer’  which I made some time ago:

And here is a photograph of the original taken at an awkward angle and at a distance but you can still see that mine (made as a wedding present) only resembles the original in so far as it’s the same subject matter. Taken out of its context and reduced to the two figures as opposed to the whole dancing troupe, the mosaic becomes more intimate – it is now about the relationship between the male musician and the female dancer, about their interconnection and absorption in the moment. The semi-naked woman is no longer a spectacle surrounded by male onlookers but a woman dancing for her own delight.

The other reason why making piece-for-piece faithful copies doesn’t always work is because it’s not unusual for the original mosaics to be flawed. Remember they were often the product of many hands and their execution in some cases would have been carried out by humble labourers. There are inconsistences in the laying: the andamento starts to flow in one direction and then jerks off in another; the stones are irregular and there are discrepancies in the way they are laid not to mention frequent examples of more serious mistakes where designs fail to fit within their borders or patterns are botched. As MK Mosaics writes in a recent blog post entitled The Perfection Trap part of the difficulty of making pleasing copies of mosaics is trying to avoid our natural inclination as contemporary practitioners to make mosaics which are faultless and which thus lack the liveliness of the originals.

Finally, an irrefutable reason for making Roman mosaic copies is that people want them. There are many mosaicists around the world who specialise in copies and their work is highly covetable. Private clients request copies for their floors,  bathrooms, foyers, courtyards,  kitchens and garden niches. My personal favourite makers of Roman mosaic copies include the Mosaic Centre Jericho as well as individuals who have all trained in Italy such as MK Mosaics from San Francisco:

Katherine Forst who is based in California:

And Koko Mosaico in Ravenna.

So now that we’ve got over our hangups about trying to replicate the long-dead greats of the mosaic art and explained why making Roman mosaic copies is worth doing, let’s roll up our sleeves and actually make one. For a detailed explanation of how to re-scale figural Roman mosaics and for wonderfully helpful (indeed invaluable) guidance on using a staff for laying out the complicated braid patterns beloved by the Romans, I would advise you to check out the Roman Mosaic Workshops website. Many mosaic schools offer courses on making Roman mosaic copies so if you are serious about pursuing this technique then I’d advise you to sign up. 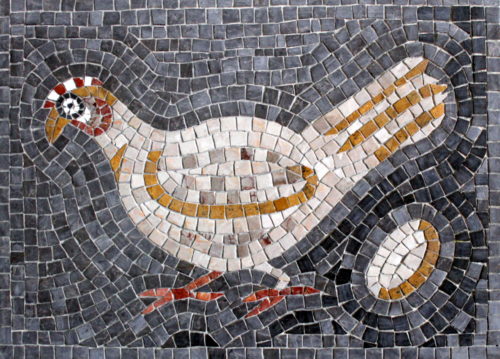 With the major caveat that I only make Roman copies from time to time and am by no means an expert on it, here is an explanation of what I do. It’s simplistic but it works for me:

Coming up: A mosaic project hour by hour.