Andamento is the visual flow and direction within a mosaic produced by the placement of rows of tesserae. (From: www.joyofshards.co.uk)

Andamento – Time for an Update

You might be forgiven for thinking that I am a bit of a traditionalist. ‘Contemporary mosaics inspired by ancient designs’ has a distinctly tweed coat and brogues ring to it. And then there all my blog posts about ancient mosaics and fewer about their contemporary equivalents so really I wouldn’t blame you for being convinced that I wear knitted cardigans and have a deep fondness for Anita Brookner novels. But buried within this buttoned-up exterior lurks the heart of a rebel and when it comes to the subject of andamento in mosaics that rebel is chafing to get out.

My andamento rebellion is one of those quiet ones that disgruntled children excel at. Not saying anything, perhaps. No screaming and slamming doors, maybe. But a pervasive presence and a body language that’s as clear as a siren that says whatever you have decreed is not well received and will just not do. You might not be able to see me but my arms are crossed across my chest, my shoulders are hunched and my bottom lip is protuding all because I feel that the opus-sayers, the shadowy figures who decide what is an opus and what is not, have apparently checked out and forgotten to turn off the lights.

Andamento is fiendishly important. When you are designing a mosaic you need to consider the andamento alongside other elements in your work. It can’t be left as an after thought. It might not count alongside American politics  and the great European debate as a topic for dinner table conversation, but it is andamento which is the bones, meat and soul of a mosaic. Never mind the design – a design is a design – but pay attention to what is going on in the background of a mosaic and it is there that you will find the melody, the choreography, the spirit of a mosaic. Different opuses achieve different effects.

Andamento: The Traditional Types of Opus

If you are looking at ancient mosaics (which I do a lot) this is the classic one, the old faithful, pinstriped suit and briefcase one. It’s called opus tessalatum  and is where the artist lays the background tiles in straight rows as in the example below. The effect is calming. It’s not going to call attention to itself so the eye remains focused on the central feature of the mosaic.

Opus Regulatum is where the tesserae are laid in a grid like the sheets of mosaic tiles that can be bought pre-made. Again, the effect is to keep the eye focused on the main design but that design feels as if it is floating or pasted on the background as opposed to being embedded in it. Here you can see Opus Regulatum being used in the background of London’s famous underground mosaic designed by Eduardo Paolozzi:

Opus Vermiculatum is among the oldest of the opuses with the earliest examples dating to 200BC. The name refers to the ‘worm-like’ quality of the work, and refers to a fine, detailed laying technique using very small tesserae which are closely set with the aim of producing painterly effects with gradations of colour. The technique was especially used in ancient emblemata – the central motif of early floor designs.

Opus Musivum is a joyful, foot tapping kind of opus which entails laying the lines of the background so that they radiate out from the design like ripples in a pond. This opus brings more movement and liveliness to the mosaic than the ones above.

Another alternative is opus palladianum which is a fancy name for crazy paving or laying your tesserae of all different shapes and sizes in pretty much any way you like. It is a deceptively difficult opus to do well on a small scale as although there is no need to fuss too much about cutting, you need to keep the spaces between the tesserae regular and to ensure that the tesserae maintain a relationship with each other. However, it’s a useful opus for large background spaces and is popular for community projects.

Then there’s also opus circumactum, a series of little fan-shaped flourishes which are wonderfully elegant, opus sectile which entails cutting the tesserae into precise shapes to fit together like a jigsaw and the rather obscure opus spicatum which is a herring bone pattern like this Byzantine-era brick work.

And finally, the delicately airy opus signinum where fragments of tiles, earthernware, pebbles or tesserae are set into a mortar bed:

But, dear Reader, if you have been paying attention you will have noticed something a little suspicious about the opuses. They all have Latin names. What does that suggest to you? It suggests leather chairs, flock wallpaper and plumes of cigar smoke, that’s what. It does not suggest that the shadowy opus-sayers have looked up from their newspapers for at least one hundred years. So let’s do their job for them.

Andamento: The New School of Opuses

Definition: the opus is the mosaic.

It’s a way of doing things that lets you escape from the rules and ‘ums’ and start all over again. It’s a game changer like the Renaissance or Darwinianism or the Theory of Relativity. It’s liberating, exciting, innovative and fresh. It’s putting a guetto blaster in that fusty opus-sayer reading room and turning up the volume. There are too many brilliant examples to list them here but the name that always comes to mind for me is Julie Sperling who uses opus opusum to make deeply beautiful and politically powerful mosaics about climate change.

Definition: A mixture of squares and rectangles laid with all the panache of opus palladianum but with restricted shapes.  Named after Gary Drostle who uses it to stunning effect in his California Seashore Trail Mosaic Project.

Definition: A way of laying undulating rows of tesserae as if they were mimicing waves but not limited to sea themes. The rows weave into each other using triangular tesserae. Gives a whimsical, light feel like summer breezes.

This is the one I go for. Opus Fluctum evolved as the result of experimentation and now I often use it as a matter of course. I found that I used to dread the background stage of laying mosaics and so I began playing with the andamento and Opus Fluctum keeps me totally immersed and fully engaged.

Definition: Widely used in Greek schools of mosaic. The tesserae are laid very close together (the closer the better) the mosaic is often made in reverse before casting and the andamento is not given prominence. Similar to Opus Vermiculatum but without the finesse. .

Definition: use of varied and contrasting background laying patterns in the same piece. A useful technique to visually divide a single work into distinct sections. Named after Emma Biggs who uses it to stunning effect in a number of her works including this one:

Writing about andamento has reminded me that another whole blog post needs to be written on the use of colour, pattern and contrast in mosaic backgrounds. Consider this: 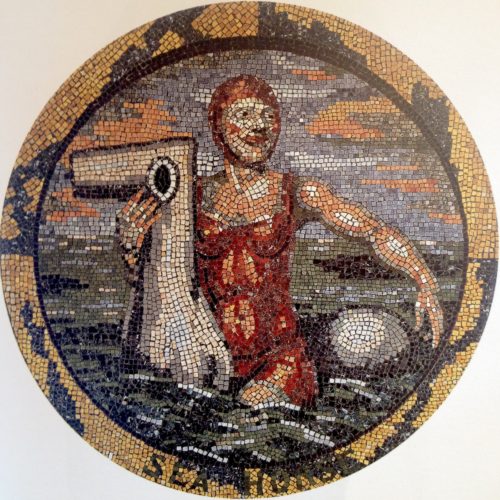 And watch this space!