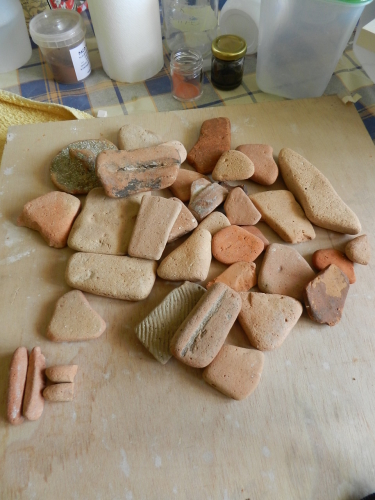 We were in the car again. The temperature outside was nudging 40 degrees. We’d spent the weekend diligently looking around ancient sites (of which more later) with the sun beating down on our heads and peering at bits of old things in museum display cabinets. Now we were heading back to Athens and the idea of a swim seemed more like an imperative than a choice. The road ran next to the sea and it was just a matter of finding a place where it was easy to park so we could plunge in with no further ado. 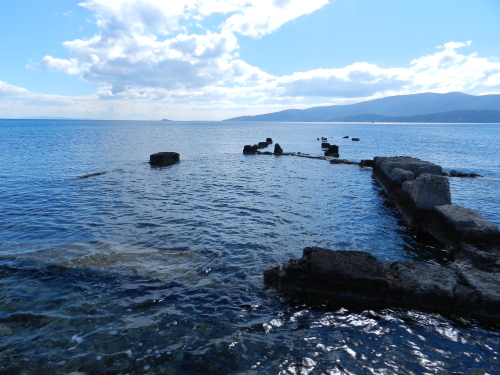 So we chose a stretch at random which had no particular appeal – the beach was narrow and close to the road. It was not a place you’d normally want to linger but the water was clear and cool and that’s all we cared about. Then, as we swam out we noticed there were signs of ancient remains on the waters edge and when we swam closer we could see submerged outlines of man-made structures – walls, perhaps, or pavements. 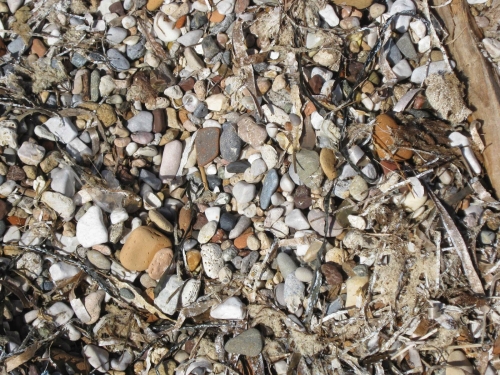 We later discovered that we had been swimming over the Roman harbour of Kechries where St. Paul landed and, so the story goes, cut his hair in fulfilment of a vow, before proceeding up the road to preach to the Corinthians. 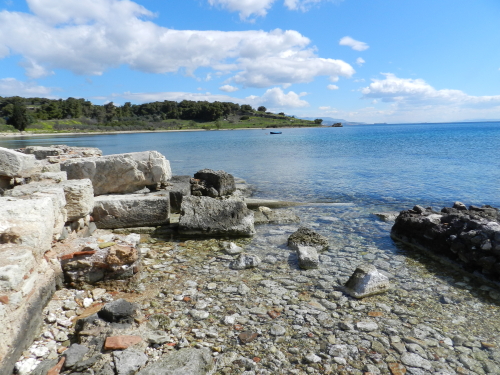 What was intended as a quick dip turned into a happy hour of marine archaeology for David and the boys, while I swam back to shore to fiddle, as is my wont, with pebbles and to look for pieces of coloured glass worn smooth by the sea. But this time my idle sifting was not among pebbles, but through shards of ancient pottery strewn all along the shore, as casually discarded as the cigarette butts and plastic bags of modern life. What fun I had! Its no secret that the beaches on this particular shore were rich with broken pots but I had never expected such a hoard as this. I found what looked like a crudely made pot lid (top left in photo above) and a piece of clay with wavy striations (bottom middle). Fergus discovered what must have been the base of a amphora handle. 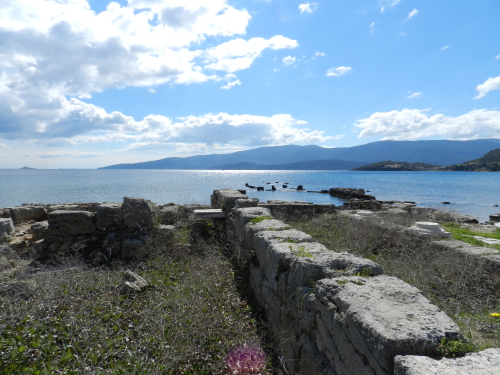 I could have gathered bagfulls but, for now, I am content with a modest supply. I want to see if I can make mosaics with them. I cut a couple of pieces and laid them the flat side down with the sea-rounded edges upwards – see the bottom left hand corner of the photo. I love the range of terracotta tones and I think that something fine could come out of them. Let’s see. If I do make something from them it will be a particular pleasure to think that one of the pieces might have been thrown aside the day St. Paul came into land, dropped by an excited follower in his eagerness to get close to the man himself.